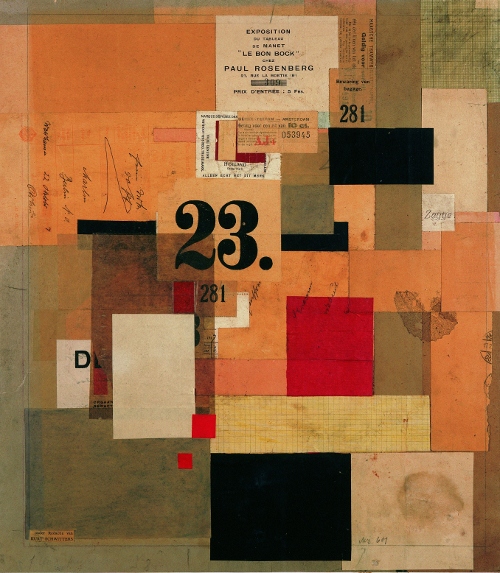 HAIRY EYEBALL German artist Kurt Schwitters (1887-1948) acted as an interpreter for the discards of modern life, or what Alfred Barr, the first curator of New York’s Museum of Modern Art, tellingly referred to as, “witnesses stolen from the ground.” He listened to what the matchbook covers, torn ticket stubs, crinkled packaging, scrap paper, fabric remnants, and other junk that he took back to his studio had to say about form and color, and in turn, re-presented their testimonies to the world in which they once circulated.

Berkeley Art Museum’s exhibit “Kurt Schwitters: Color and Collage,” the first US survey of the artist’s work in 25 years, traces the dialogue between found things and made objects that comprises Schwitters’ remarkable oeuvre. The 30 some-odd works that fill BAM’s sixth floor gallery are densely indeterminate, neither strictly paintings nor collages, but hybrids of both that reflect Schwitters’ association with the Berlin Dadaists — and also his background in painting, which accounts for both the influence Expressionism, and later, Constructivism, would have on his approach to composition.

In some pieces the assembled components have been pushed and flattened into each other, with the paste acting as both fixing agent and mixing medium, giving the work the appearance of having been painted — which in a sense it has been, if you substitute paper scraps for brushes and oils. In other works, bas relief-like effects are created through successively built up and painted-over layers in geometric arrangements that become more precise over time. In every piece, there is a careful attention to the grain of the materials used as well as their color (Schwitters gravitated towards an autumnal palette of reds, blacks, browns, and yellows, with occasional streaks of blue or gray).

As with other artists of his generation, Schwitters’ life and career was to be inevitably shaped by both world wars (his trajectory from Germany to Norway to England was largely determined by where the Nazis weren’t). Schwitters referred to his output interchangeably as Merz, a neologism based on the second half of Kommerz, the German word for “commerce.” The designation reflected his desire for his practice to, in his words, “make connections, if possible, between everything” in a world he saw as increasingly fragmented.

Whereas his Dadaist contemporaries such as John Heartfield and Hannah Höch cut apart newspapers and film rags and reconfigured them as monstrous satires of the noisy, busy society that produced them as spectacular propaganda, Schwitters’ work proposes an engagement with its various found source materials based on assimilation and incorporation rather than harsh juxtaposition. Everywhere in Schwitters’ work there is the glint of the familiar: the postage marks, the trademarks, bits of text, and reproduced images in his skeins of torn pulp and paint identify specific places, times, and events.

The Merzbau — a vast, ongoing architectural assemblage that took over six rooms of Schwitters’ family home in Hannover and which was completely destroyed in a 1943 bombing raid — is perhaps the apotheosis of Schwitters’ vision. Like a beaver building a dam, Schwitters constantly added bits and pieces, inviting friends to build out alcoves within the all-white grotto-like rooms whose square lines had totally given way to myriad angled surfaces and seemingly-impossible proportions.

On BAM’s ground floor sits Peter Bissegger’s meticulous, life-size reconstruction (1981-83) of one of the Hannover rooms. It’s a doozy to walk into, and, once you’re out again, near-impossible to try and square the three dimensional geometric assault just experienced against the three wall-mounted 1933 black and white interior photos on which the reconstruction was based. Save perhaps for the Winchester Mystery House, you will simply not experience another space like it, or have your experience of space so wonderfully warped (even BAM’s interior, which offers a Brutalist response to the Guggenheim’s famous spiraling rotunda, seems positively orderly by comparison).

While undeniably cool as an object, in some respects, the reconstructed Merzbau conceptually cuts against Schwitters’ process of ongoing accumulation that led to its construction in the first place. To have the Merzbau be a wholly transportable thing that can be taken down and re-assembled, jigsaw puzzle-style (as demonstrated in an accompanying time lapse video of the piece’s installation), is to fail to treat it as something that has no final form but is always in the process of becoming. Indeed, it’s telling that Schwitters built other Merz environments wherever he moved, at each location spinning anew another web of form and shape culled from bits and pieces of his surroundings. The task he had set before himself to connect the world anew would prove to be unending.