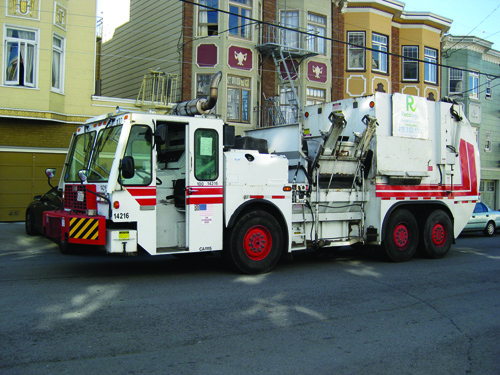 A controversial city waste disposal contract appeared primed for final approval by the Board of Supervisors on July 26 (after Guardian press time) — despite being challenged by a lawsuit and initiative campaign — after two progressive supervisors rescinded their initial vote in a July 20 committee hearing and supported awarding the contract to Recology.

City staff had recommended awarding the 10-year, $112-million landfill disposal and facilitation agreement to Recology (formerly NorCal Waste Systems, Inc.), which has grown from a locally based company to the 10th largest waste management firm in the US, with $652 million in annual revenue, according to Waste Age magazine.

If the full board follows the unanimous recommendation of its Budget & Finance Committee, the vote will authorize Recology to transport and dispose up to 5 million tons of the city’s solid waste at the company’s Ostrom Road landfill in Wheatland, Yuba County. The contract will take effect when San Francisco’s disposal agreement at Waste Management Inc.’s Altamont landfill in Livermore expires — estimated to occur in 2015.

The deal will cement Recology’s control, at least for a 10-year period, over all aspects of the city’s solid waste stream, at a cost of about $225 million per year, even as the company faces significant challenges, many related to the city’s 1932 refuse collection and disposal ordinance.

That law, approved during the Great Depression to prevent conflict between competing garbage haulers, has resulted in Recology’s exercising complete control over trash collection and transportation in San Francisco, without having to bid on those contracts or pay the city franchise fees.

During the negotiations over the city’s next landfill contract — the only aspect of San Francisco’s waste stream put out to bid — this 79-year-old law was invoked to explain why Recology has the sole authority to transport trash and compostables to Wheatland, which is 130 miles from San Francisco.

The move also comes as Yuba County is contemplating significantly increasing dumping fees at the landfill — from $4.40 per ton to $20 or $30 per ton — a hike that could erase the $100 million that the Department of the Environment (DoE) claims the Recology deal would save over a competing bid by Waste Management Inc. WM is the largest waste firm in the U.S., according to Waste Age, with about $12.5 billion in annual revenues.

On July 18, WM filed a lawsuit in San Francisco Superior Court to prevent the city from approving the agreements with Recology on the grounds that they violate the city’s competitive bid laws.

“The Department of the Environment inappropriately and unlawfully expanded the scope of its 2009 ‘request for proposal for landfill disposal capacity’ and, therefore, violated the city’s competitive procurement laws,” WM alleges in the suit.

WM has long held that DoE inappropriately issued a tentative contract award for both the transportation and disposal of solid waste to Recology without soliciting any other transportation bids. But DoE, which gleans $7 million annually (to operate recycling, green building, and environmental justice programs and long-term planning for waste disposal) from rates that Recology’s customers pay, ruled last year that WM’s objections are “without merit.”

Now WM is asking the court to require DoE to scrap its award to Recology and issue a new request for proposals to comply with competitive bidding requirements.

“There is ample time for the department to issue a new RFP,” WM stated July 18, noting that there is plenty of room at its Altamont landfill to accommodate the city’s waste after the contract expires.

That same week, a coalition led by retired Judge Quentin Kopp, community activist Tony Kelly, and Waste Solutions CEO David Gavrich announced that it had submitted enough signatures to qualify an initiative on the June 2012 ballot requiring competitive bidding and franchise fees from any company that seeks to win any aspect of the city’s solid waste business.

Kelly says his group was unable to collect enough signatures in time for the November election because Recology hired the city’s two biggest signature-gathering firms to circulate what he calls a “phony petition” in support of Recology’s performance in San Francisco. And signature gatherers say they were harassed by Recology boosters while trying to petition citywide.

“But I believe the question of whether candidates support competitive bidding will continue to be a defining issue this fall,” Kelly said.

The board’s decision on the landfill agreements has already been delayed several months, following a February 2011 Budget and Legislative Analyst report recommending that the board consider submitting a proposition to the voters to repeal the 1932 refuse ordinance so that future collection and transportation services be put to bid. The report also recommended that future residential and commercial refuse collection rates be subject to board approval.

But with two progressive supervisors running in citywide elections this fall, and with Recology exerting massive pressure on elected officials, the Kelly coalition could not find four supervisors to place such a charter amendment on the November ballot, forcing them to launch their own initiative.

And at the July 20 meeting of the board’s Budget and Finance Committee, Sup. Ross Mirkarimi, who is running for sheriff, and Sup. Jane Kim rescinded their initial decision to send the agreements to the full Board without recommendation. Instead, after the committee had moved on to other business, they joined Chair Carmen Chu, one of the most conservative supervisors, in forwarding the Recology agreements to the full board with unanimous support.

Mirkarimi interrupted the committee’s next discussion to rescind the landfill vote. “I think there was some misunderstanding a little bit in wrapping up the landfill agreements with Recology, ” Mirkarimi said. He said that he asked for the vote to be rescinded, “so we can accurately reflect some of the sentiments being articulated here. I think we just learned some things on the fly.”

In many respects, the switch by Kim and Mirkarimi made sense: prior to their initial vote, they made positive statements about the proposed agreements, but also stated an interest in exploring the appropriateness of the city’s 1932 law.

“Overall, I think this was a good contract,” Kim said. But she noted that, thanks to the 1932 ordinance, the city doesn’t get franchise fees. And she claimed that it only gets half of what other Bay Area cities get from their waste contractors. “So, I’m really interested in continuing that conversation, but I think it’s a separate conversation,” she said.

Mirkarimi said it was his concerns that led the committee to “put a pause” on the Recology agreements until it could “undertake more homework.” He also noted that his office “held a number of meetings” and he tried to “leverage this opportunity to reanimate activity at the Port.”

“I was hoping that we might be able to arrive at something much more deliverable,” Mirkarimi said, presumably referring to the fact that these efforts resulted in DoE unveiling an amendment to include two “possible changes” to operations and facilities at the Port of San Francisco in the agreements.

These changes involve utilizing other modes of transportation, including barges, as alternatives to the rail-haul plan proposed in the agreement. They also call for developing new facilities at the Port for handling waste, recyclables, organics, and other refuse. The cost of such alternatives would be passed onto the rate payers.

“I think that, cost-effectively, we may be able to insert the Port into this equation, but it’s not ready for prime-time yet,” Mirkarimi said. He concluded by saying that Recology has been innovative in reducing the city’s waste stream.

“This should be a front-burner conversation,” Mirkarimi said, noting that former Mayor Gavin Newsom focused on making San Francisco “the greenest city” in the United States. He added that San Francisco claims to have a 77 percent diversion rate, the highest in the U.S., and said, “That comes at a cost, it doesn’t come for free.”

After the meeting, DoE deputy director David Assmann said that the City Attorney’s Office is reviewing WM’s filing. “But it’s too soon to comment,” Assmann said.

He also claimed that, thanks to the 1932 ordinance, “there was no practical way” for another company to transport San Francisco’s waste to its designated landfill, “other than building a second transfer station outside the city.”

But Kelly continued to express concerns that the agreements are not competitive, and that the city lacks a contract and ensuing franchise fees. “They are running this as if it’s still the 1950s,” he said.

Kelly claimed that Recology Vice President John Legnitto, who is the 2011 chair of the SF Chamber of Commerce’s Board of Directors, recently told him that Recology has been in negotiations with City Hall around a $4 million franchise fee, but that the money would now be spent opposing Kelly’s competitive bidding initiative.