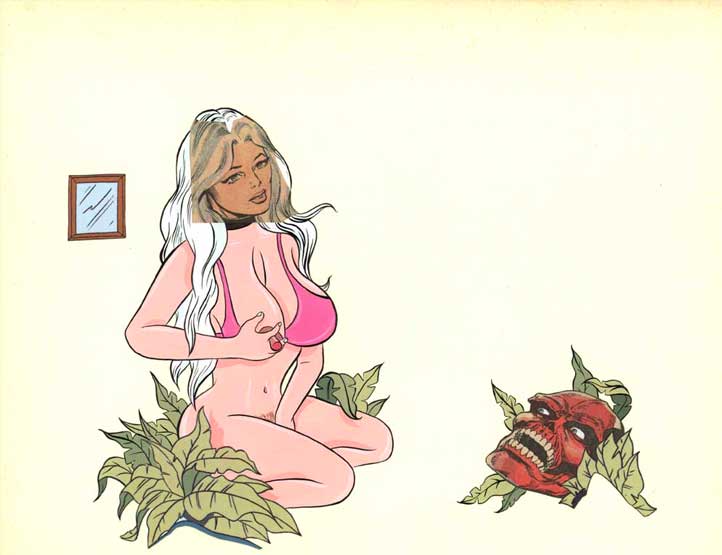 Artist Mark Mulroney learned his ABCs in Catholic school but his spongey child-brain soaked up a lot more than just textbook facts and bible versus. The gigantic boobs, guts and bloody wounds, horrified men, sweet girls, and hilariously exaggerated genitalia present in Mulroney’s current exhibition, “Sent Upstate”, is far from holy, but he likes to give the church credit where due.

Mulroney didn’t exactly realize the severity of the images he had been exposed to in the church until he started drawing as a teen. The violent stories, bloodshed and the relentless guilt surrounding sex started to show up in his doodles, mixing with comic book clippings and album cover art. All grown-up, Mulroney isn’t afraid to be honest about where his ideas on sex and death derived from and a quick stroll around “Sent Upstate” at The Guerrero Gallery will give you shivers and tingles. Should you be offended? Turned-on? Maybe you should laugh? Mulroney’s artist statement says it best, “People don’t want to die and they want to have sex.” Still, it’s best to hear Mulroney explain things a bit further.

SFBG: What was the inspiration for “Sent Upstate” collection?

Mark Mulroney: I had six weeks to turn it around so I didn’t have time to overthink. I just relied on my usual methods: put a boner on something or make it bleed.

SFBG: What are some of your primary inspirations for all that sex and creepiness?

Mulroney: My work helps me understand the world, however tripe or cliché that sounds. And a lot of it has to do with what I saw in Catholic school. You don’t realize the gravity of things you’re looking at when you’re really young. So violent, but you don’t realize it until you look back. Like, I when I was five, I saw a picture of a Saint being filleted. Odd, isn’t that? So what I’m doing now is making sense of the influential images I was exposed to during age five to 18. What was I looking at back then and how did it shape me?

SFBG: What are some other specific images you remember?

Mulroney: Someone’s eyes being lit on fire by the holy spirit. Now that makes for some fantastic imagery. I did a lot of drawing as a kid. I’d look at album covers of Black Sabbath and this one from Sub Humans with a guy being shot in the head. I learned how to draw through Catholic school and record covers.

SFBG: Do you really think about those things while you’re creating or is it more subconscious?

Mulroney: I don’t overthink anything. The rule is make work I would want to look at. Sex and death? That’s work I want to see and then I just make it fit together somehow.

SFBG: Is the work meant to make your stomach churn? Mine did a little.

Mulroney: Well you don’t get a free pass—every action has consequences. I suppose that’s a Catholic thing. No matter what you do, you’re going to pay for it somehow. In most of my imagery there is someone having a good time, coupled with another image of a person not having a good time.

SFBG: Where do you get inspiration for all the sexual imagery?

Mulroney: Library book sales. I go to a lot of thrift store with my wife and brother.

Mulroney: Outside of buffalo NY I found five, small photo albums. Polaroid size. All images were of a guy taking a picture of his boner, different positions, different days. No face, just this guy’s boner. I got it for five bucks. Why were you collecting pictures of your boner. Can’t anticipate finding that. Why is this out there? What did you get out of this—was it a gift. Everything everything ends up at swap meet or thrift store, like this handcarved wood box I found with a women’s diaphragm in it. And Argentina is fantastic place to find self-published home pornography from swingers clubs in the 50s. This kind of stuff totally informs everything I do. I’m so curious about this stuff. I’m not being judgmental, I just have a curiosity for why people do what they do.

SFBG: Do you think your work turns people on?

SFBG: Did you draw it?

Mulroney: I emailed her back to ask some sizing questions and she never replied. She wanted to pay me $25, but man, I would have done it anyway. She had the balls to ask for that. I old have done it for free.

SFBG: What’s up with all the super, gigantic boobs in your work?

Mulroney: Goes back to when I was five. My dad had a Playboy with a blonde woman, standing on top of waterfall in a 70s jungle setting. She had really big boobs and I thought to myself, “This is really something I think I like. Those are fantastic.” And bigger boobs are more fun to draw than small ones. There’s so much comic potentioal in boobs and wieners. I haven’t found comedy in vaginas— I can’t seem to find a way to draw them in a way that doesn’t make them slightly scary.

Mulroney: Ha! Not a goal. Usually when I move from one house to the next I change my focus. When I lived in San Francisco, you would think I would have made more sexual work but there was so much around that I didn’t need to participate. When I moved to upstate New York, the sex stuff started coming out. You don’t see bodies there. It’s too remote, non-stop grey, cold snow.

SFBG: Maybe you should to an island of men so you can work on your vag drawings?

Mulroney: Ya or go to prison. Then it would happen. I could do tattoos on people as a trade for cigarettes and things.

With Charles Linder’s “Swimmingly, With Watermelons and Referrals”