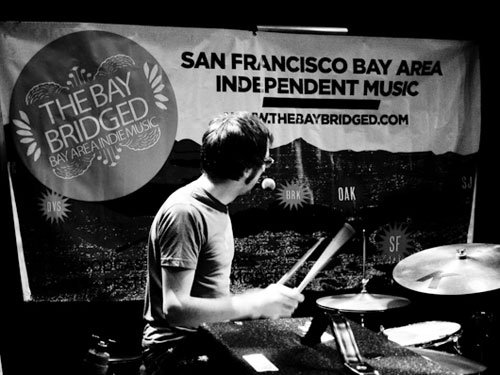 LIGHTS OUT Ironically, the Bay Bridged founders Christian Cunningham and Ben Van Houten were on their yearly pilgrimage to South by Southwest when they came up with the idea for a local music website.

In 2006, the two were watching a San Francisco band whose name has since been lost to time, wondering why they’d come all the way to Austin to discover how much they liked this band from their own town. “It just struck us as odd,” Van Houten explains.

Life-long music fans, they decided they wanted to take active roles in promoting the local SF indie scene. When they returned to the Bay Area, they started an audio podcast. “Since I had done college radio, my friend kept telling me about podcasting and he finally sold me on the idea,” Van Houten says. “We just decided we would interview a band every week that was always local, and that all the music was going to be local.”

From there, the mission expanded — now the Bay Bridged is a nonprofit with a complete website that gives out recording grants and other creative support to local music groups. The podcast continues, airing every other week. During the first week of the month, the site offers tracks from a sampling of bands coming to the Bay Area. Later in the month, it releases a mixtape with a thematic binding agent, like a single artist (the most recent mix featured a set of 15 favorite Ty Segall songs) or a festival (for example, 20 tracks by bands playing at SF Pop Fest 2011). “The question we’ve been asking ourselves for the past five years is how to get people interested in local music,” Van Houten says.

These days, it’s not a Bay Bridged deal breaker if you’re not a local band. Van Houten explains that the organization’s new focus is on getting people out to see the music for themselves. “If you stay just on the Internet, then you’ll discover good things — but you’ll never have that visceral experience one gets with live music.”

Many Bay Area shows are a mix of local and other music, a combination of sounds that becomes part of the experience of seeing these bands. The site clues you into a gig with one of your favorite visiting bands, and in the process you discover a rad local opener: mission accomplished. The website also curates its own concert and festivals, including the third annual Regional Bias fundraiser showcase that will stuff four local indie groups into the Verdi Club on Aug. 6.

“On the radio waves you can’t find independent rock in San Francisco,” Van Houten says. “[But] podcasts are good for many of the same reasons radio is great. I still think there’s a value to being a passive participant in music, to being part of the audience and letting someone else do the programming.”

We’re living in an era when most of our AM and FM radio waves are stuck in a controlled loop. Luckily, it’s also the age of the Internet and for many music fans, creating a podcast is just mic check away.

The Bay Bridged recently made its 250th podcast. And Van Houten sees no end to his role as a local hype man. “Periodically we say, ‘Surely, we’re going to run out of things we’re interested in.’ But It hasn’t happened yet — and I don’t see it happening in the near future.”