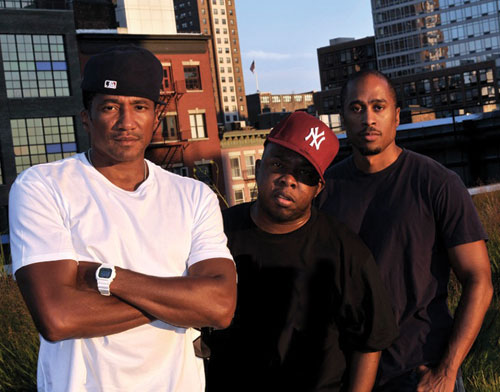 Actor Michael Rapaport probably didn’t set out to make a hip-hop Metallica: Some Kind of Monster (2004), but that’s pretty much where his portrait of A Tribe Called Quest ends up. The first half of Beats, Rhymes & Life: The Travels of A Tribe Called Quest is predictably worshipful, slathering on low angles and slow motion to cover mediocre live shows. More effectively, Rapaport traces the Queens group’s brief incubation period and subsequent breakthroughs in what would later be called alternative or, more obnoxiously, conscious hip-hop. A slew of notable followers and contemporaries toast Tribe’s first three albums, but by the time Rapaport catches up to the group’s 2008 reunion even their longtime friends De La Soul are wishing they’d call the whole thing off.

The documentary slides into the Monster zone of hurt feelings and passive aggressive behavior in accounting for the group’s split after their inappropriately named 1998 album, The Love Movement. Phife Dawg and Q-Tip are the warring egos, though perennially slighted Phife is really no match for the imperially cool Tip. DJ Ali Shaheed Muhammad is the Kirk Hammett of the outfit, looking on helplessly as the two bigger personalities make a mess of things. Tribe’s transgressions seem wholesome compared to Metallica’s binging (we hear a lot about sugar addiction from Phife, the self-proclaimed “funky diabetic”), but it’s similarly a case of childhood friendships distorted by success.

It’s not that surprising that the recent glut of cookie-cutter rock docs has for the most part left hip-hop untouched — someone like Jay-Z hardly needs the help of a bozo with Final Cut Pro to spin out self-mythologies. Rapaport’s portrait is utterly conventional, but there’s still novelty in a story about aging in hip-hop. Because Q-Tip basically just wants to talk music and Ali seems genuinely shy of the spotlight, turbulent Phife emerges as the emotional center of the film. He shakes off his wife’s suggestion that he should see a therapist, but that’s very much the mode of his rambling address to the camera. “I love hip-hop, but as it is now I could do with or without it,” Phife says at one point. That’s not what we expect from a fan’s notes, and Beats, Rhymes & Life is the stronger for it.

Those who appreciate Tribe’s flowing soul sound will find interesting tidbits spread thinly across the film: roll calls of the original legends of New York City hip-hop; fond reminiscences of the group’s Afrocentric costuming (“Some questionable shit,” per Black Thought); Phife’s breakout “Yo!” at the top of “Buggin’ Out”; and especially Q-Tip’s refined taste for loops (he gives a great reenactment of discovering the sublime groove for “Can I Kick It?” on an old Lonnie Smith record). One would happily trade 10 minutes of mediocre performance footage for more production insights (Ron Carter’s contribution to the Low End Theory hardly rates a mention), though Pharrell Williams’ rhapsodic praise goes some ways toward plugging the gap.

Rapaport doesn’t pursue more interesting questions of race and politics that naturally follow the band’s crossover appeal. And as is so often the case with hagiographies, discussion of broader musical trends comes to a halt when the group in question hits the big time. A stray exception is when bookish Questlove mentions that Tribe’s third album, Midnight Marauders, and the Wu-Tang Clan’s debut, Enter the Wu-Tang (36 Chambers), came out on the same day in 1993 — the last great day of classic hip-hop according to him, though one could just as easily read it as a sea change away from Tribe’s good vibes.