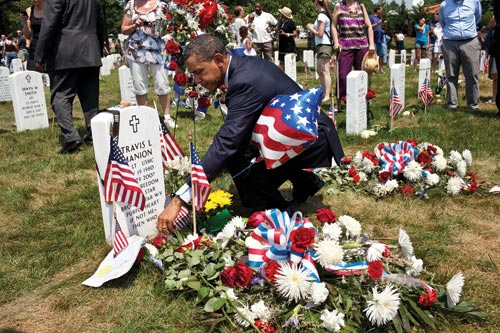 Tied to each soldier were handwritten messages that gave reasons for demanding a large and swift withdrawal. Many of the petitions came from folks whose loved ones are in the military or are veterans of Afghanistan and Iraq.

Unlike most Democratic Party leaders, Feinstein has not demanded a significant draw-down of combat troops, despite polls showing that Americans increasingly support leaving Afghanistan, particularly after the killing of Osama bin Laden. There’s good reason for the public’s growing restlessness. This 10-year war has already surpassed Vietnam as the longest conflict in U.S. history.

According to the online database icasualities.org, 1,637 U.S. soldiers have died in Afghanistan and 4,463 soldiers have died in Iraq. Another 11,722 service members have been wounded in Afghanistan, and 32,100 in Iraq, primarily by improvised explosive devices. And that’s not counting the thousands who are suffering from depression, posttraumatic stress disorder, and other ailments.

Griffin said her goal was to draw attention to the political organizing in support of ending the war. But even as she made her delivery, Feinstein was on MSNBC maintaining that draw-down decisions should be left to the military generals.

In the wake of President Obama’s June 22 announcement, which went way farther than the generals wanted, many of Feinstein’s colleagues such as Sen. Barbara Boxer and Rep. Nancy Pelosi, the house minority leader, expressed disappointment that the pace of withdrawal isn’t quicker.

“I am glad this war is ending, but it’s ending at far too slow a pace,” Boxer said.

“We will continue to press for a better outcome,” Pelosi stated.

Rep. John Garamendi (D-Concord), who visited the troops over Memorial Day weekend, told us that a different strategy is needed. “Our troops are incredible, dedicated, and skilled. But every minute of every day, they are in a very dangerous situation, and many of them are dying. There is no recognition that we are caught in the middle of a five-way civil war.”

And Rep. Barbara Lee (D-Oakland) vowed to offer defense appropriations amendments to cut all funding for combat operations. “History shows there is no military solution in Afghanistan,” she said. “We’ve got to engage with the Taliban and engage with those in the region to find some stability.”

But where does Obama’s plan leave the peace movement as the election nears?

Griffin said activists should take credit for getting Obama to withdraw 33,000 troops rather than the smaller number his generals wanted. She sees his plan as a sign that activists need to keep pushing for more, including a concrete timeline for when he will bring all the troops home.

Under Obama’s plan, 68,000 troops will still be on the ground in September 2012, and 2014 is identified as the deadline for completing the transition to Afghan control and ending the U.S.’s combat mission.

“This means there’ll be a significant military presence in Afghanistan for at least another three-and-a-half years,” Griffin said. “By the end of Obama’s first term, the war will be 11 years old and there will be nearly double the American troops on the ground as there were when [George W.] Bush left office.”

“But faster than what?” Solomon said, noting that “10,000 troops are only 10 percent of our force. This is a pattern we saw in Iraq, where the withdrawal was too slow and the numbers remaining doubled when you factored in all the private contractors.”

Solomon said that when Nixon pulled 500,000 troops from Vietnam in the late 1960s, the conflict actually increased in terms of the tonnage of weaponry used. “And the U.S. is now engaged in wars in Libya, Yemen, and a Pakistan air war.”

But longtime antiwar activist and former Democratic state legislator Tom Hayden saw a number of clues in Obama’s speech for how to push for a faster, bigger, more significant draw-down.

“Obama said 33,000 troops will be withdrawn by next summer, followed by a steady pace of withdrawal. So that gets you to 50,000 troops by the election, and all combat troops out by 2014,” Hayden told us. “If he could be pushed by the peace movement, that would break the back of the warmongers’ planning.”

In his speech, Obama noted that the U.S. will host a summit with our NATO allies and partners to shape the next phase of this transition next May in Chicago, where Obama’s former chief of staff is mayor.

“Get ready, Rahm Emanuel, for big demonstrations,” warned Hayden, who was a member of the Chicago Seven group tried for inciting riots during the 1968 Democratic National Convention. “But do you imagine Obama would do that if he were going to escalate the war? No — he’s wrapping a ribbon of unity to transfer control to Afghanistan on a timetable.”

He also noted that Obama’s allies aren’t exactly pushing him to stay. “They may not have an exit strategy, but they are heading for the exits,” Hayden said. “So if you organize demonstrations with international support, that gives you an organizational opportunity in multiple governments to press Obama to leave.”

Hayden predicts that Obama is moving toward a diplomatic settlement, led by Secretary of State Hillary Clinton, that is pro withdrawal and pro women.

“But Obama’s got a genuine problem of his own making. He escalated the damn war,” Hayden said. “He doesn’t want the military to be attacking his plan. But if he wants to be in the center, he’s going to offend the generals.

Hayden noted that in his speech Obama said, “America, it is time to focus on nation building here at home.” It was a statement that sounded in line with a recent U.S. Conference of Mayors resolution calling on Congress “to bring these war dollars home to meet vital human needs, promote job creation, rebuild our infrastructure, aid municipal and state governments.”

“Given the growing discontent with the war, it’s hard to see how you can claim that this is a step forward,” he told us.

Becker said it has been difficult to mobilize the antiwar movement under a Democratic administration. He also stressed the importance of people coming out in San Francisco for a “protest, march, and die-in” on Oct. 7, the 10th anniversary of the war, and for a major action in Washington. D.C., on Oct. 6. “What’s going to get the U.S. out is a combination of what’s going on in Afghanistan — and what kind of antiwar movement we have here.”