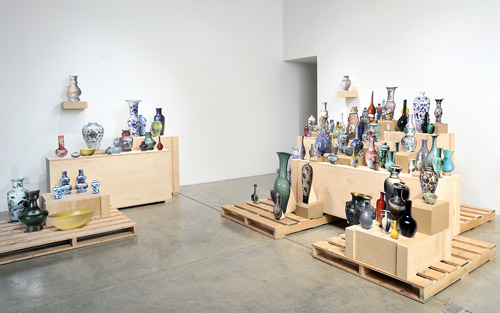 HAIRY EYEBALL It’s not just the title of Stephanie Syjuco’s solo show “RAIDERS” — her first at Catharine Clark Gallery — that brings to mind Indiana Jones. Something of the latter-day swashbuckler comes across in Syjuco’s art, which, like Indy, initially seems to be playing to all sides for the sake of plunder — when in fact this cleverness is the outward expression of a deeper skepticism toward the very institutions it’s engaged with.

But Indiana Jones is also a pop cultural commodity and a franchise that has netted millions for creators George Lucas and Steven Spielberg. This too, I imagine, is not lost on Syjuco, whose work frequently strips Pop Art bare of its smart, slick exterior (as well as Conceptual Art of its pretensions) to access the larger and far less glamorous network of market forces, production processes, and questions of ownership that shape it as a commodity.

Whereas Takashi Murakami installed an actual Louis Vuitton boutique inside Los Angeles’ Museum of Contemporary Art, Syjuco’s project “Counterfeit Crochet” called on hobbyists the world over to knit fake designer bags, complete with logos, and even provided the patterns and instructions. She has also, on more than one occasion, set up detourned versions of shops and marketplaces inside museum walls.

“RAIDERS” opens with an installation of what at first glance appears to be a collection of handsome Asian antiquities — mainly vases and small, decorative vessels — arranged on the very shipping crates they were transported in. It quickly becomes obvious that what we’re looking at is truly a set-piece, and that the “priceless” cache before us is actually an arrangement of life-size photographic reproductions adhered to laser-cut wooden backings.

Raiders: International Booty, Bountiful Harvest (Selections from the A____ A__ M______) — to give the installation its full title — becomes more interesting when you consider that Syjuco used images downloaded from the Asian Art Museum’s online database of its holdings as her source material. Love and theft (if I may poach the title of Eric Lott’s remarkable study of American minstrelsy) are certainly forces that have shaped many a museum’s prized holdings, and it is this history — one so often bound to colonialism and its aftermath — that is also embedded in Syjuco’s fakes.

And Syjuco decidedly, politically, traffics in fakes, not forgeries. Practically every piece in “RAIDERS” has rematerialized online, open source materials — be they digital images or readily accessible canonical texts — into art objects that are themselves parodies of object-ness. Conceptually whip-smart and materially banal (wood, tape, paper, and glue are common ingredients), Syjuco’s pieces continually taunt us with the question, “Why buy the cow when you can get the milk for free?”

In the gallery’s back room, jewel-case-size blocks of wood covered in pixilated digital prints of CD cover art representing Syjuco’s entire collection of “music illegally downloaded or pirated from others” are, as the bright orange stickers adhered to their shrink-wrapped exteriors proclaim, really available for the “blowout price” of $9.99 a piece.” Across from this pile that looks as if it had been airlifted straight from a Tijuana bootlegger, is Phantoms (h__rt _f d__kn_ss) an installation organized around Joseph Conrad’s Heart of Darkness, replete with a table, sawhorses, houseplants, TV monitors, and 10 bound copies of different online, public domain versions of Conrad’s text that are strictly “price upon request.”

Syjuco is certainly not the first artist to take on the art world’s biggest white elephant: value. But she wields her scalpel with a thoughtful precision and economy of gesture that will forever be beyond the abilities of a gaseous giant such as Damien Hirst. And that, to borrow another clichéd bit of market-speak, is truly priceless.

If you missed the San Francisco Museum of Modern Art’s excellent Eadweard Muybridge retrospective that closed earlier this month, Matt Bryans has created something of an homage to the early master’s photographic panoramas and doctored views of a not-quite-virginal Yosemite at SF Camerawork.

“Untitled” unfurls along one of the gallery’s walls for nearly 30 feet, a fantastical expanse of ever-shifting landscape seemingly captured from a middle distance. Glaciers give way to snow-capped peaks, which then dip into valleys that ease into rolling plains and finally abut more misty crags. In the piece’s upper half, clouds swirl and dissolve across the arc of the sky as in a Chinese ink painting.

Although the piece has the weathered patina of an old daguerreotype and recalls Muybridge in its staged epicness, Bryans is a collage artist who works solely with a medium whose livelihood has been called into question about as often as film photography’s: newsprint. “Untitled” — which like the other large collage commissioned by SF Camerawork is all explosions and stars wrapped around a support column — was created using only India erasers and inky photographs clipped from newspapers.

Scanning the sky of Bryans’ panorama, you can make out the smudged traces of what was once type. And the closer you look, you start seeing the fissures between the thousands of carefully glued pieces that Bryans has transformed into a seemingly organic whole, which nonetheless appears on the point of disintegration.

The panorama piece is large enough that it sags a little and billows whenever a current of air hits it. It seems to hang heavy with the losses it embodies — photography’s ghosts, newspapers as a disappearing medium, the unknowable contexts of the images themselves — a load that’s almost too much to bear.