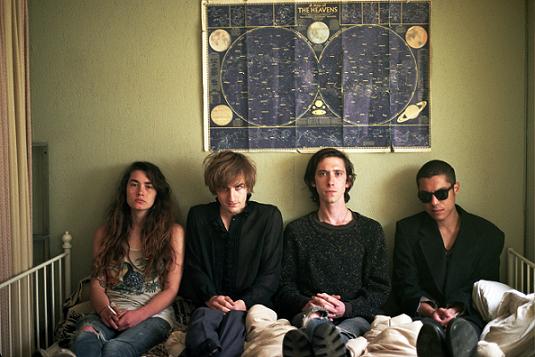 “This music was what we wanted to hear,” explains vocalist-guitarist Jigmae Baer of the beginnings of the Royal Baths, “that we weren’t hearing anywhere else.”

The Royal Baths formed two years ago, as Baer was coming to the end of playing with Thee Oh Sees, and guitarist-vocalist Jeremy Cox moved to San Francisco by way of Arcata.

“When we first started, I’d been listening to a lot of finger-picking,” explains guitarist-vocalist Jeremy Cox. “So I was experimenting with open tuning, like Delta Blues, playing Willie Johnson and Skip James.”

“I remember the first song we covered was a Skip James song,” adds Bear. “And we covered a song by Nina Simone, the Carter Family, and Spaceman 3.”

The quartet plays rock ‘n’ roll with a pretty grittiness: accelerating beats makes the music frenzy-filled; staggering melodies shine through the noisy fuzz; extended psychedelic guitar jams are rough flourishes; and the duo delivery of lyrics is hypnotic in its repetition and raw in its simple truth.

“Jigmae writes all the lyrics,” Cox clarifies. “Jigmae brings his typewriter and I’ll have just a guitar, and we’ll have an idea about what we want the song to be about.” Together the pair’s dynamic — one fiddling on the guitar and the other typing away — brings about the dark and light of the Royal Bath’s music. “After we have a rough skeleton of the song, we’ll bring it into the studio and do it with the full band, says Cox. “And it changes further from there.”

In 2010, the band released its debut album Litanies (Woodsist Records). They’ve already recorded and mixed a new album. When I ask if there’s a release date for that one, Baer quips, “We would’ve liked to release it two months ago.” The pair explains that they recorded the album in February, but had to go back to the studio to redo the initial mixes.

“This album is a lot different sounding to our ears,” explains Cox, “because our last album was more just writing the songs as we went. This album was mostly recorded live, so it’s more of a live rock and roll album.”

This is a good thing; The Royal Baths have a voltaic energy live. And if you’ve seen them play recently, then you’ve heard new material from this unreleased and unnamed album.

In the new song “Faster and Harder,” Baer and Cox’s low and high registers harmonize the lines “I love my damaged girl/We share a wicked world.” The track has a British paisley rock undertone and like good classic rock ‘n’ roll, it is sexy and dirty. The double guitars spiral out of control as the duo chants the title lines faster and faster.

When asked what inspires Baer’s lyrics, he replies, “It’s always a combination of being partially autobiographical and partially from my friends and what I see in them.” Baer adds, “A lot of times, I write stuff that makes me laugh.” He notes that the band is often regarded as being very serious, but in an absurdist way. “I am talking about the real fucked up problems that our friends and us have, in a very unflinching way, and trying to find the absurdity of our petty little problems.”

Beat-driven track “Burn,” explains Baer, “is just a story about our friend who went to Pill Hill and just got ripped off.”

As you wait for the release of the Royal Baths next album, catch the band’s live show at the Hemlock before they go on tour this August and begin their relocation to Brooklyn.