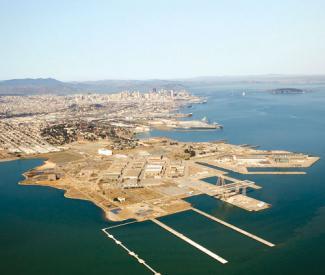 “The Civil Grand Jury concludes that the Hunter’s Point Shipyard redevelopment project will require more communication, more transparency, and more commitment from the City in order to achieve its goals of providing housing, jobs and economic development, tax revenue and open spaces to San Francisco and its residents, particularly those residing in the surrounding neighborhoods.”

So reads the conclusion of the Civil Grand Jury’s 2010-2011 report, which is titled, “Hunters Point Shipyard: a shifting landscape.” The report makes six findings and seven recommendation that city departments and the Board will have to respond to within the next 60-90 days. And some of these recommendations reflect problems the Guardian unearthed and highlighted during in its coverage of the development.

The jury also found that the City has placed itself in a potentially compromising situation with developer Lennar where in essence, “the wolf is paying the shepherd to guard the flock.”

The jury further noted that by having developer Lennar reimburse the city for monitoring expenses associated with the shipyard project, SFDPH has created a situation that “could raise doubt in the public’s mind about its commitment to proactively and impartially enforce environmental health regulations even when it might adversely impact Lennar.”

Public trust in the SFPDH has been further jeopardized by its failure to update its website in a timely manner, and its apparent reluctance to comment publicly on the best method to deal with the clean-up of Parcel E-2, which is the site of a former dump and deemed one of the most polluted parcels of land on the shipyard.

The jury found that the above concerns were “further reinforced by the recent release of email messages that purportedly showed inappropriate communications between senior officials at the SFDPH and the U.S. Environmental Protection Agency and Lennar.”

The jury found that with the exception of Parcel A, the City has no legal control over the remaining shipyard property. “Consequently, in a technical sense, the City has no authority over matters dealing with deadlines and deliverables for environmental clean-up. However, the City does in fact have some standing in these matters via the 2004 conveyance agreement between the San Francisco Redevelopment Agency (SFRA) and the Navy. The agreement stipulates that the Navy will work collaboratively with the SFRA and share information about cleanup work.”

Last but not least, the jury found the previous efforts by the City to implement workforce policies at city-funded construction projects such as the shipyard have “largely proved ineffective” as they only require contractors to make good-faith efforts, but that earlier this year, a new local hire ordinance was implemented with stricter requirements and mandates.

Based on these findings, the jury recommended that SFDPH needs to update its shipyard project website on a weekly or monthly basis, immediately stop accepting money from Lennar to pay for monitors at the shipyard and cover the costs from its own resources, rigorously enforce conflict of interest guidelines governing deals between its officials and the companies they are monitoring, and conduct its own environmental assessment of the issue of capping Parcel E-2 and make its findings available to the public for comment.

The jury also recommended that because the Navy still owns the majority of the shipyard land and therefore the city has no direct control over deadlines and deliverables, it is critical that the Bay Area Air Quality Management District and SFDPH be “particularly vigilant in monitoring clean-up activities at the shipyard.”

The jury further recommended that the City and the SFRA should have “contingency plans in place” for continuing Redevelopment-related projects, including the shipyard, “in the event State redevelopment plans are cut or eliminated.”

Last but not least, the jury recommended that to ensure that promised job creation goals for the shipyard are realized, “the City should ensure that the Office of Labor Standards Enforcement has sufficient resources to allow it to effectively enforce the provisions of the new workforce laws.”

According to the conditions of the Civil Grand Jury’s report, for each finding the responding parties must report if the recommendation has been implemented or not, whether it requires further analysis, or was not implemented because it is either unwarranted or not reasonable.

So, expect to see some fireworks in the coming weeks, given that the Mayor’s Office, the Board, the Office of Economic and Workforce Development, SFDPH, the Office of Labor Standards Enforcement, the Redevelopment Agency and the BAAQMD have been named as the responding parties in this report…