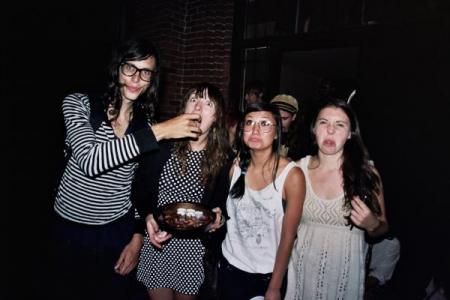 It’s purple and bloodied, scuffed and raw from a blind leap and yet if you dig your finger in deep enough, there’s a soft spot back and to the left. The Oakland-based quartet Wax Idols— playing Sun/26 at Thee Parkside — puts on a badass punk front, but those shiny hooks expose just enough emotion to keep things from scabbing. Wax Idols are super-gritty and always promise to play their noisy garage punk loud and hard. The band is fronted by Hether Fortune who’s got a firecracker reputation and a long list of local music projects, including Blasted Canyons and previously, Hunx and his Punx. She’s joined by Keven Tecon on the drums, Jennifer Mundy on the guitar and vox, and Amy Rosenoff on bass, and although the band is dominated by ladies, it keeps an angsty, andro-sound.

Fortune told 7×7 that the band’s name was inspired by the lyrics “flesh-colored Christs that glow in the dark” from Bob Dylan’s “It’s Alright Ma (I’m Only Bleeding)”, which isn’t creepy at all, right? A quick scroll through the band’s blog and it’s obvious this stellar mix of freak-show inspiration is constantly being collected, analyzed, and hopefully churned into some new music. Think bones, lots of nude ladies in strange public arrangements, bizarre music icons, and all kinds of other awesome dream material; puts some physical creep into the layered emotions. More please!

Wax Idols will be joined by the grungy, ’90s-rock of San Francisoc’s Lilac, the surfy sounds of The Wrong Words, and Paperhead, a psych-pop trio from Nashville.

WAX IDOLS w/Lilac, The Paperhead and The Wrong Words