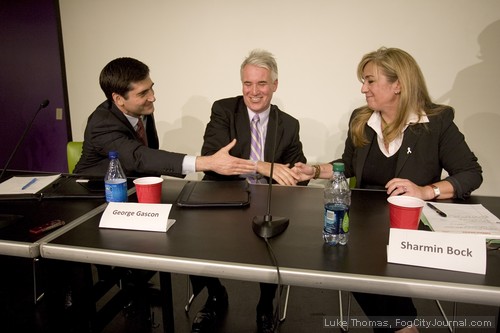 District Attorney and former SFPD Chief George Gascón, Alameda County Deputy District Attorney Sharmin Bock, and former San Francisco Police Commissioner David Onek all landed solid punches during a three-way District Attorney debate that was co-hosted by the San Francisco Young Democrats and the Alice B. Toklas LGBT Democratic Club, and moderated by Recorder editor Scott Graham. The primary sponsor of the debate was the City Democratic Club, according to CDC President Jim Reilly. So, thanks CDC for helping to pull off a great event.

The debate was framed as a choice between Bock, a veteran prosecutor with leadership experience, Gascón, a career cop with managerial experience, and Onek, a former San Francisco Police Commissioner and criminal justice reform expert. And above all it proved that if you lock three attorneys in the same room and pit them in a three-way fight, you’ll be rewarded with a blood sport spectacle.

Bock kicked off by noting that there are many similarities between the three candidates—except when it comes to independence and experience “Experience matters,” Bock said, throwing a one-two punch at Gascón and Onek. “The job of the District Attorney is not a management job, a police job or a job for someone with just a law degree. It needs a veteran prosecutor,” she said—remarks that resonated well with the crowd, judging from the applause.

But after a few niceties, Gascón shot right back at Bock and Onek. “I am the only one who has led large organizations and pushed public policy forward in an effective manner,” he said.

And Gascón struck a home run when he revealed that when he took the job of Chief of Police in Mesa, Arizona, he was “facing one of the most toxic environments” in terms of hatred towards people of color and the LGBT community–and that he did something about it, by standing up to anti-immigrant Sheriff Joe Arpaio of Maricopa County, and protecting the local LGBT community’s right to protest.

When it was his turn to speak, Onek fired off his own rounds at Bock and Gascón, noting that the state’s criminal justice system is broken—and claiming that it will take an outsider to fix it.
“This is a once-in-a-lifetime opportunity to reform the criminal justice system,” Onek said, laying out his reform-minded track record.

And then he stuck it to both Bock and Gascón by stating that the death penalty does not work. “I will never seek it in San Francisco under any circumstances,” Onek said, earning excited applause, as he noted that he’ll look at all policy question through the prism of three questions: ‘Does it make us safer, is it cost effective and is it fair and equitable?”

Onek also noted that neither the Supreme Court’s ruling that California must reduce its prison population by 30,000, nor Gov. Jerry Brown’s call for prisoner realignment, come with any money.
‘That’s a disaster,” observed Onek, as he stressed the need to demand resources to help deal with the upcoming load of prisoners that about to return to San Francisco.

Gascón fielded questions about whether they are enough people of color and LGBT background in management in the D.A.’s Office. “Well, I think there’s definitely always room for improvement in any organization,” he said, noting that he has a history in the Los Angeles Police Department, the Mesa, Arizona Police Department and the SFPD, “of pushing very aggressively to have diversity within the office.”
But he started a bit of a buzz when he said it was “really a surprise to me that I promoted the first male, black, police captain to the San Francisco Police Department.”
“You would think that there have been, you know, male African-Americans in that department for many years. It was hard for me to believe that actually in 2009 we had not had one,”  Gascón continued, a remark that got some debate observers asking afterwards, if this meant that Gascón really did not know that former SFPD Chief Earl Sanders was a black male.

Meanwhile, Bock was happily trampling all over the sit-lie legislation that then SFPD Chief Gascón and Mayor Newsom backed last fall, as she noted that more foot patrols and community policy are what’s actually needed. “Political hot-button measures don’t work,” Bock said. “Both sides agree it hasn’t worked. It’s the wrong response to the real problem.

Asked if he had a conflict of interest, when it comes to investigating allegations of police misconduct, Gascón claimed the problem is limited to a small number of officers, adding, “if the allegations are true.”

“In reality the majority of the SFPD are hard-working people doing the right thing,” he said. “And there has been only one challenge—and our office has prevailed,” Gascón said. “However, there have been a finite number of cases where I personally adjudicated the bad conduct—and those will be handled by the Attorney General’s office.”

Bock stressed that she was not in favor of sending drug offenders to prison and would focus on restorative justice, instead. Asked if she would have a panel on her staff review potential death penalty cases, Bock confirmed that she is committed to having a Special Circumstances Committee, as D.A. Kamala Harris did, to get input around the facts and from lawyers involved in such cases.“The ultimate decision is mine, and I oppose the death penalty,” Bock said, noting that she does not believe that 12 jurors will return a unanimous death penalty verdict. “But I do think as prosecutor you need to go case by case.”

Asked if he would have sought the death penalty in a case like the L.A. Night Stalker, who murdered 13 people, many of them elderly, Gascón said, “Probably not. All of us agree that the death penalty is not a good tool. But it is part of our system, and I continue to have the system Kamala Harris had in place. At the end of the day, it’s my decision, and I’m the only one in the room, who can say I’ve already turned down the death penalty.”

Asked how he felt about marijuana, Gascón said he doesn’t believe folks should be incarcerated for use—and that folks are already being diverted to community courts in those instances.

But when Onek tried to wrap up by positioning himself as a the reformist-minded outsider, Gascón pounced, reminding folks that Onek was a Police Commissioner, when the Police Commission recommended Gascón to Mayor Newsom as the next SFPD Chief. “While David is someone I respect—and one of those who hired me, David has painted himself as an outsider, when the Police Commission is the policy-making body for the SFPD. There are no outsiders here. The question is, what have you done? There’s a difference between calling yourself a reformer and having other people call you a reformer.”

Bock for her part used her closing remarks to remind folks that there has been a crime lab scandal, alleged police misconduct, a DNA backlog, and about 100 cases dismissed as a result of these scandals, and a bunch of prisoners are about to be sent back to the community because of realignment. “We’re in challenging times, at a critical crossroads, with stormy weather ahead,” she said. “I’m not going to be trying things out at your expense. As a veteran progressive prosecutor, I’m fully prepared.”