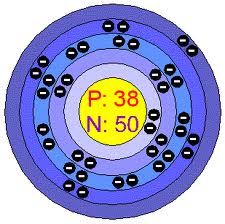 More bad news for Japan and its stricken fishing industry: Tokyo Electric Power Company says radioactive strontium up to 240 times the legal concentration limit has been detected in seawater samples near an intake at the crippled Fukushima Daiichi nuclear plant.

According to Japan Times, the utility said the substance was also found in groundwater near the plant’s Nos. 1 and 2 reactors. And Japan’s Nuclear and Industrial Safety Agency said it is the first time that the substance has been found in groundwater—and that is necessary to carefully monitor the possible effects of the strontium on fishery products near the plant. Strontium tends to accumulate in bones and is believed to cause bone cancer and leukemia.

Strontium is a chemical element with the symbol Sr and the atomic number 38. An alkaline earth metal, strontium is a soft silver-white or yellowish metallic element that is highly reactive chemically. The metal turns yellow when exposed to air. It occurs naturally in the minerals celestine and strontianite. Strontium-90, an isotope of strontium, is present in radioactive fallout and has a half-life of 28.90 years. Both strontium and strontianite are named after Strontian, a village in Scotland near which the mineral was first discovered.