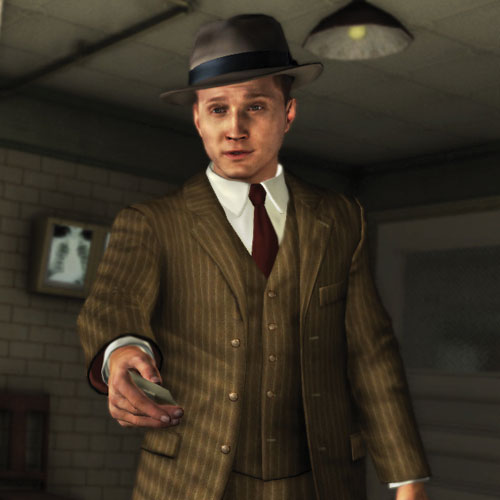 It has been roughly two decades since the arrival of 3-D graphics changed video games forever. Visual fidelity and realism have increased geometrically. But though the ability of designers to render convincing buildings and 800-ton interstellar battlecruisers is at a zenith, one aspect of their games falls consistently behind: the people.

Sure, glistening muscles have long been perfected, and the hair looks better every year. Stare into the lifeless, glassy eyes of a cartoonishly-breasted video game sexpot, however, and there’s no mistaking where you are: the uncanny valley, a metaphorical location coined to describe the sudden onset of revulsion we experience when exposed to simulated humans that approach but do not attain realism (think Tom Hanks in 2004’s The Polar Express).

L.A. Noire, at long last, has built a giant suspension bridge over the gap. Team Bondi, the game’s Australian developers, relied on a new technology called MotionScan, which entails filming actors in a special room using 32 synchronized high-definition cameras that shoot from every angle, but focus on the head. The data from the cameras is then combined to create a stunningly accurate 3-D model of an actor’s face, right down to the laugh lines and the slicked-back, 1940s hairstyle. The model is then grafted onto a body rendered using conventional motion capture, resulting in the most believable human beings ever seen in a video game.

This technological innovation was crucial to L.A. Noire‘s design. As a police procedural, the game makes interrogating suspects the player’s most important challenge. Team Bondi turned to MotionScan in order to create a game that allows sharp-eyed, controller-clutching gumshoes to scrutinize the faces of potential perps, hoping to spot the telltale hard swallows, sidelong glances, and spastic blinking of a liar.

The success of MotionScan reaches far beyond the interrogation sequences, however, or even the game itself. There are important scientific findings suggesting that the interpretation of facial expressions is crucial to the way we experience empathy and understand emotions. The introduction of believable human faces into video games will have a seismic effect on the medium, revolutionizing the creation and efficacy of story and character.

L.A. Noire, like any good detective, provides elegant proof. It may be a game about arresting criminals and identifying their lies, but it is also a game whose strength lies in its tragedy. Lives are ruined, children are orphaned, and a generation of soldiers struggles to cope with the horrors it experienced on the killing fields of World War II. Though they all refuse to talk about it, you can see it in their faces.