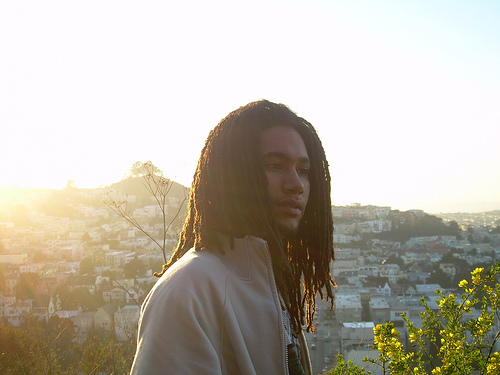 A couple weeks ago I shot a long-winded email to former Bay Area DJ and producer Chief Boima. I had just finished speaking to Dun Dun of the Los Rakas crew for what eventually became this article, and he mentioned an upcoming EP with former Bay Area DJ and producer Boima. Now, if you don’t know about Boima, you need to get acquainted with the Banana Clipz digital funk on Ghetto Bassquake (for free download, too). It’s a joint instrumental album between Boima and Oro 11 of Bersa Discos that merges electronic architectonics with rhythms, melodies, and sound bits from the African diaspora.
Enough of that, though — Boima withstood my long-windedness, and after a couple exchanges, he did all the explaining.

SFBG Dun said that you do with instrumentals what Los Rakas does with lyrics. Do you see similarities in your respective styles? Your backgrounds and influences?
Chief Boima Well, when I first came across Los Rakas I had just come back from Panama, and I was on this high from hearing all the big carnaval tunes and the mix of sounds that reflected my musical and cultural background, but in a Spanish-speaking world. I grew up on the stuff that a lot of Panamanians grew up on, zouk, dancehall, soca, etc. So I was at the SF Carnaval and I heard Panamanian reggae but with this Bay Area flavor to it. (Check my initial reaction here, and I had been posting stuff like this.) I identified with what they were doing immediately.
Also, my father is from Sierra Leone, and I grew up with West African cultural influences, so I try to incorporate that musically into my electronic and hip-hop beats. I feel like Los Rakas do the same thing with Panama, and what Dun said is a great compliment.

SFBG Dun also mentioned a future EP coming up. What’s your process working with Los Rakas? What are some of your thoughts on this upcoming EP?
CB Well I linked up with Rico and Dun after not seeing them for maybe a year. I had given Rico some instrumentals and I never had gotten the chance to record on them. At that point I had a little studio set up in my spot in Oakland, so I invited them down to work on stuff. I think it was a real natural collaboration because we knocked out a lot of different stuff in like 6 months. They would come over and just freestyle or write. A lot of songs came out through different processes. Like one song they gave me an acapella and I constructed a beat around it. Other songs, I played them the beat and they’d just start writing to it, and we’d record. This would all happen after work and on weekends, so it was cool because the sessions were real compact but productive. I’m real excited about the EP. I think the material is strong and unique, so I can’t wait to see the reception.

SFBG “Tropical” or “tropical bass” seems to be the new term which has emerged to cover the range of new electronic music informed by both American and Afro-Latin styles of music, and their many convergences and hybrids. Do you see yourself as part of this tropical movement? Would you trace its form or define it differently?
CB I get the name tropical bass, but I see it akin to a label like world music that’s just kind of vague. I think the styles that are included under the genre are diverse musically, but they share similarities in the production process that is informed by increased access to technology and information across the world. It’s also really related to urban environments, like hip-hop and house were in their beginning stages. So I see all this music as a kind of continuum of hip-hop and electronic music from Detroit and Chicago. I see myself as part of that production process, more than a musical genre.
The genres I enjoy and work with are informed by their local environments and have names like hip-hop, dancehall, coupe decale, house, soca, and kuduro. They come out of specific regions, and their environments inform the music. A lot of the most popular rhythms are related to Africa and its diaspora, people who are generally scattered around the tropics. So that’s why people use tropical, but I wouldn’t necessarily describe myself or anyone else that way. It doesn’t really work anymore when you get [sounds like] Balani in Mali, or UK Funky, which are not tropical [in setting], but are still informed by the same aesthetics and production processes.

SFBG Do you try to digitize or transfer Afro-Latin/Caribbean folk sounds, genres, or ideas into electronic form?
CB Yes, but I don’t explicitly set that as a goal. I add in all my influences, which are informed by growing up in the Midwest and spending time on the West Coast as much as “folk” music. I was into hip-hop and electronic music growing up, and my older relatives would get down to music that was recorded by live instruments. I love those older tunes, they make me nostalgic, and make me feel connected to my culture, so I wanted to bring the feelings that I have when I hear them to a contemporary club space.

SFBG Our sense of place is now more amorphous than it was maybe thirty years ago. The Internet has in many ways uprooted us, and with regards to music, given us access to all sorts of folk genres, sonic forms of indigenous culture, traditional sounds and instruments, beforehand only accessible perhaps by being there or coming into contact with someone who was indeed there. To what extent do you think the open source availability of the Internet influences the way you channel folk forms of music and older sonic traditions in your production? In what way does place or region (whether the Bay, Cuba, NY, or online places, even the temperate range of tropical) inform your music?
CB I think the Internet has facilitated interactions and dialogue, but you can’t overlook things like increased immigration and traveling. A New York Times article recently said that New York is as diverse as it’s ever been. It claims that NY has more people born in other countries living there than ever before. The whole United States is changing. Europe is changing. The feedback loop to global centers of production in the “South” is super influential. International travel is becoming cheaper, so it’s easier to see the whole world. I think we’re going to reach an energy crisis in the near future where all that will be curbed a little, and the Internet will keep those interactions going, but we’re really living at the apex of an empire, just like the Romans, and the Ottomans, and the Greeks were super diverse civilizations informed by cultures from all over the world. So the Internet is just our current means of achieving those interactions. It takes the place of the role that sailors and desert caravans and conquerors had before. It’s just faster, and totalizing across the globe.
I travel a lot, and I have a diverse cultural background with multiple influences. That puts me in a certain position of influence because of my experience, but someone who has never traveled can have the same influences because I post about it on the Internet. But that doesn’t mean that it’s a new thing. Cotton and sugar comes from India. Potatoes come from Peru. Coffee comes from Ethiopia. These are things that are fundamental to our cultural identity today, but we don’t necessarily think about them as coming from other places. I feel like these things seep into everyday life, and they become a part of wherever they end up whether NY, London, Rio, Kampala, etc. But when they get to those places I think they change. In other words, environment’s influence is fundamental and if you listen hard you can tell the difference.