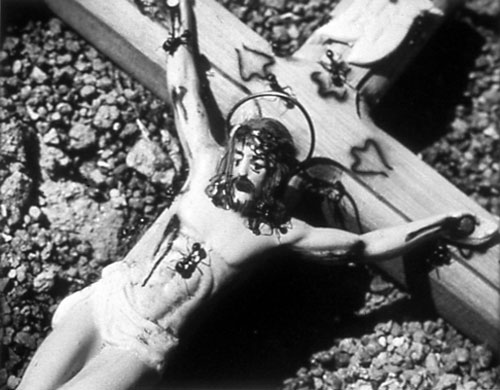 Stop me if you think that you’ve heard this one before: a Washington DC art institution caves in to right wing politicians and conservative Christians calling for the removal of “controversial” work made by an openly gay artist.

No, I’m not talking about what happened with Robert Mapplethorpe more than two decades ago. In case you haven’t been following what’s turning into the biggest art news story of 2010, David Wojnarowicz’s video A Fire in My Belly was removed from the National Portrait Gallery’s exhibit “Hide/Seek: Difference and Desire in American Portraiture” on November 30th, after Smithsonian Secretary G. Wayne Clough bowed to pressure from Bill Donohue, President of the Catholic League, incoming House Speaker John Boehner, and Majority Leader Eric Cantor, who denounced the video as a form of, “hate speech.”

In response, the artist’s estate and the P.P.O.W. Gallery in New York have made Fire In My Belly available for exhibiton, and several museums and galleries across the country have started installing the video, along with other Wojnarowicz pieces. Two San Francisco institutions (that, incidentally, happen to be just down the street from each other) join the protest tomorrow.

The Queer Cultural Center and San Francisco Camerawork will screen the entire 13-minute version of Wojnarowicz’s piece at SF Camerawork’s gallery space at 7pm. The screening will be followed by a presentation on censorship and the arts by art historian Robert Atkins as well as a roundtable discussion with Ian Carter, Kim Anno and (via-Skype) “Hide/Seek” curator Jonathan Katz. Yerba Buena Center for the Arts will also show A Fire in My Belly from 11pm to 2am on a continuous loop as part of its Noel Noir party.

I’m still waiting to hear back from SFMOMA’s press office as to whether or not the museum has any plans to install and/or screen the video. In the meantime, Tyler Green’s ongoing coverage of the fiasco at Modern Art Notes continues to be indispensable.

UPDATED: SFMOMA is going to do the right thing too, in January. A publicist for the museum has just confirmed that it will hold a free screening of the full-length (30-min) version of A Fire In My Belly on Tuesday, Jan. 4 at 5:30 pm with a discussion afterward. Way to go!

DAVID WOJNAROWICZ: A FIRE IN MY BELLY