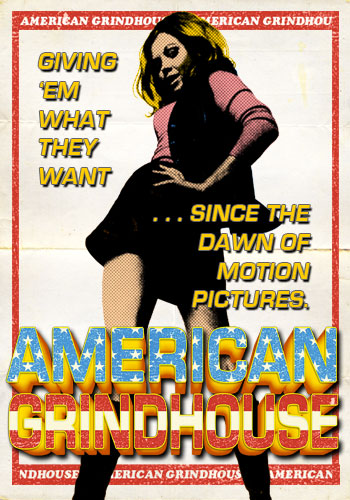 More bloodthirsty coverage of the San Francisco IndieFest’s horror-fest offshoot, Another Hole in the Head, in this week’s Guardian.

Another Hole in the Head’s two documentary offerings concern themselves with the distinctly American roots of two related strains of genre filmmaking. Elijah Drenner’s American Grindhouse traces the history of exploitation film, with a particular focus on the grindhouse theater as a cultural institution. Narrator Robert Forster recounts the tendency of even the earliest films to cater to prurient interests, and how the establishment and eventual dissolution of the Motion Picture Production Code stimulated the development of exploitation subgenres. The featured film clips are impeccably selected, mixing titillation and shock with a healthy sense of humor about the over-the-top absurdity of films like Ilsa: She Wolf of the SS (1975). Surprisingly candid interviews with gore luminary Herschell Gordon Lewis and blaxploitation director Larry Cohen prevent the film from taking on a too-self-important tone — these folks knew they were making b-pictures, and were damn proud of it. One of the most charming aspects of the documentary is the juxtaposition of different attitudes, wherein one interviewee will sing the praises of a classic, followed in quick succession by another talking head declaring it to be trash. It feels like John Landis gets the most screen time of any subject, but his charisma as well as the breadth of his oeuvre make it seem appropriate.

Nightmares in Red, White, and Blue, on the other hand, focuses specifically on horror, and director Andrew Monument in turn delivers a harsher, more self-serious take on shocking cinema. Some interviewees cross over, but standouts here include John Carpenter and modern torture porn auteur Darren Lynn Bousman. The editing here is less edifying and more irritating, though since we’re dealing with horror films, sometimes the heavy-handedness works — case in point, a lengthy montage of nudity and sex from slasher films effectively communicates both the puerile interests and blunt moralizing of much of the genre. Nightmares is also more explicitly concerned with how horror films relate to America, with many interview subjects noting how each decade’s horror trends mirrored its political issues, hence the title’s direct allusion to the perversion of the American dream.

Both films provide a historical framework for films that, as Grindhouse insists, have become part of our modern mythology and mindset. Grindhouse is more watchable, but both are worth seeing for anyone who didn’t live through the long history of genre madness and brilliance.