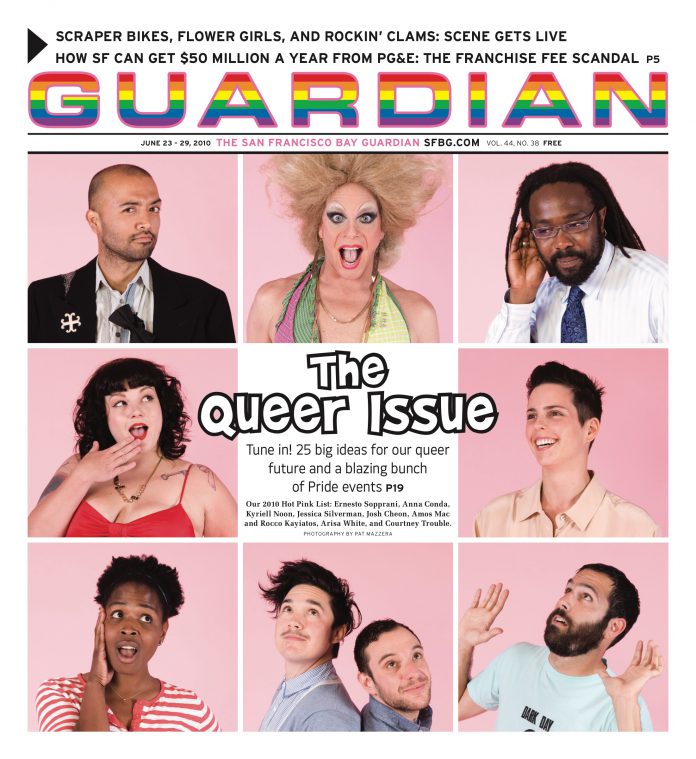 MUSIC “Every song I wrote was born out of being alone and frustrated in this perpetually sunny place,” explains Dee Dee, the leading lady of the Dum Dum Girls, who wrote and recorded the band’s debut full-length, I Will Be (Sub Pop), as a way to pass the time in Los Angeles. “It was a struggle to be happy and fill the hours in a day.” The album’s got a sunny-side-up vibe: the bottom-half has a fried, rough edge, while the top part remains bright and runny yellow.

Dee Dee (birth name: Kristin Gundred) is a lifetime Cali chick. She grew up in the East Bay, frolicked in San Fran and Berkeley during high school, went to college in Santa Cruz, returned to SF, and then moved to L.A. “It was such a shocking move,” she writes via e-mail while on tour in Paris. “But I’m grateful for the contrast it added to my life — for its amazing coasts and for my husband and friends, who I’d never have met otherwise.”

By herself, the 27-year-old singer-songwriter wrote tracks in her L.A. bedroom. When Dee Dee needed a band to take her songs to the stage, she recruited her a girl gang: Jules (guitar and vocals), Bambi (bass), and Sandra Vu (drums and vocals). “There was no other way to become a real band than to find the right girls and flesh out the songs a bit,” she says. “Nothing compares to playing with them.” Together the ladies are united aurally and visually — they all dress in black.

Dum Dum Girls released a rough-and-tumble self-titled EP before getting signed last summer by Sub Pop. I Will Be is a reverb-loving, 1960s girl group-influenced, rebel rock ‘n’ roll album smeared with Dee Dee’s sugary vocals. The album was produced by Richard Gottehrer, who cowrote “My Boyfriend’s Back” and produced albums by Blondie and the Go-Go’s. Gottehrer polishes the group’s sound without losing the speed and shake that distinguishes it. The ascent may seem quick, but Dee Dee’s been singing since she was a wee tot and pushing her own music for the past 10 years.

“I’ve finally got a handle on it,” she adds, about living and making music in LA. “And now I’m going to fuck it up again and see what songs come out of this next move.” The Dum Dum Girls show at Bottom of the Hill will be a homecoming of sorts, since Dee Dee prepares to return to hot-and-cold Frisco. “It’s time to go home,” she remarks.

“My life is kind of plagued with heaviness right now and attempting balance always channels itself into my songs,” Dee Dee notes. Her songwriting makes it clear that not only does she have an excellent sense of melody and harmony, she also knows how to tell a story.

“Bhang Bhang, I’m a Burnout,” an upbeat and jangly song, “is a positive commentary on the creative use of marijuana,” she explains. Observations such as “But really it just opens up doors/I never knew could be/in your head” make it easy to guess what Dee Dee was up to as she hid in her bedroom writing into the late hours of the night.

Listening to the high-spirited “Oh Mein Me,” it’s easy to get caught up in the blur of sound and make-up words like “Each to each/Oh my, oh my,” but the song is actually sung in German. Dee Dee explains it is about “love at first sight” and “the dramatic cosmic connection.” The poet-at-heart says she learned German because of her obsession with Hermann Hesse, whose narratives follow wanderers as they search for the meaning of life, or for meaning in life. Hesse’s thematic influence is apparent as the album maps out the experiences one has while growing up.

The middle of the album has the sweet stuff, with an adolescent-meets-adult feel. The lyrics possess maturity but emit the feel of a first kiss. “Yours Alone” starts in the schoolyard at age five and rocks its way through first times on to forever. “It’s bits and pieces gathered from my whole life and constructed into a love story,” she confirms, “starting with Ari Radowsky in preschool.”

The slowed-down “Blank Girl” is a purified duet sung with Brandon Welchez (of Crocodiles), who also plays guitar on the track. It follows an ugly-duckling-to-swan trajectory, relating the passage from shyness to finding a voice. “Rest of Our Lives” is a romantic ode written by Dee Dee for her husband. “Your eyes consume me/They always have/Before you knew me/I dreamt of them,” Dee Dee sings, looking back to her childhood ideals of romance. Informed by 1950s doo-wop and ’60s pop, it’s one of the sweetest songs about monogamy in years.

The failures of love are addressed in “I Will Be,” a rattled tale about a desperate, unbalanced affair that takes the listener back to the rough stuff. I Will Be concludes with “Baby Don’t Go,” a ready-to-make-you-cry Sonny and Cher cover. Whether slow or fast, sad or happy, sunny or rough, Dum Dum Girls captures the charms of the past, forming them into an anthem for the present. When asked what love means to her, Dee Dee simply and succulently replies, “Everything.”