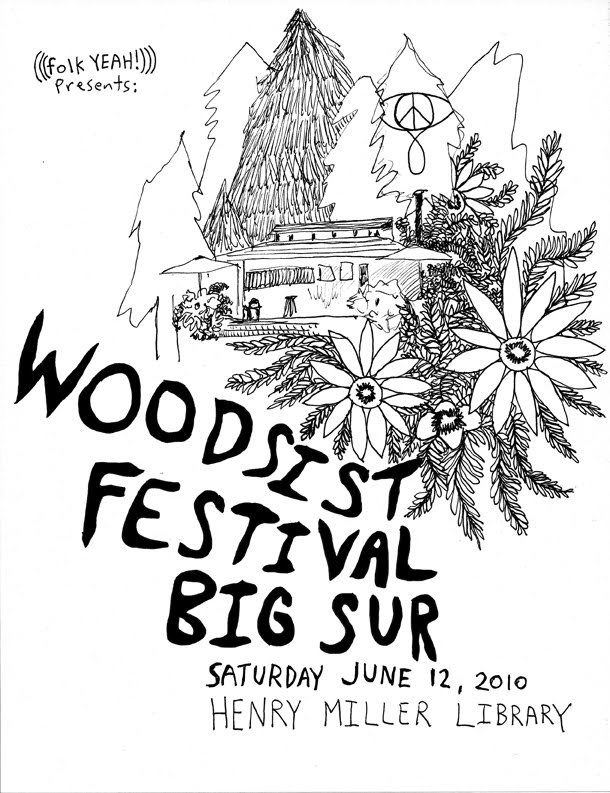 Watching Celebration at Big Sur, the film that documents the 1969 Big Sur Folk Festival, I witness the crystalline Pacific Ocean, members of the audience freaking out in face paint, and Crosby, Stills, Nash and Young, Joan Baez, Joni Mitchell and more singing merry tunes about coming together and putting a lil’ love in your heart.

This is not the ’60s, this is not the Summer of Love  – this is the first Great Recession of the 21st century. At the Woodsist celebration at Big Sur on June 12th, 2010, we did not “freak-out.” Instead, we lied around on flannel blankets, baking in the sun. Everyone we met at the festival had come from urban zones, from Brooklyn, from Portland, from special San Francisco, or even from Hollywood – like Kirsten Dunst, as well as drummer Jason Boesel and Jenny Lewis of Rilo Kiley.

In between sets, we explored the woods behind Henry Miller Library, hiking through creeks and over fallen trees. We drank cold beers or sipped on cocktails mixed in water bottles as we listened to bands hailing from Brooklyn’s Woodsist label, founded by Jeremy Earl of Woods. We were happy for the freedom to forget.

The Art Museums, a San Fran/Santa Cruz band at the end of their very first tour, performed with a unified front, as if ready to play Red Rover and decisively send anyone back who might try to break their ties. In between songs, while amps were tweaked, cute stage banter was in effect, with drummer Virginia Weatherby talking about lady bugs. San Francisco’s the Mantles, who include Weatherby on a complete drum set instead of a drum kit, had a few mishaps. Guitarist-vocalist Michael Olivares’ guitar strap malfunctioned, but such issues suited the group’s goofy good-time vibe.

Portland’s Eat Skull, about to move and realign, performed a stripped-down collection of songs that perhaps came up wanting. Philly’s Kurt Vile climbed on stage to join the group for a cover of Spaceman 3’s “Come Down Easy,” and then played an acoustic set while the sun speckled the stage. Letting his long locks cover his face, he stared at his strings and intricately finger-picked. Later, as he tuned his guitar, he asked if we were prepared for the weather to get cold.

San Fran’s the Fresh & Onlys played two new tracks, including “Waterfall.” Moon Duo, a new San Fran psych-band, played as the sun set and ended up in the dark — and the cold that Vile had predicted. The group’s guitarist Ripley Johnson (also of Wooden Shijps) is a madman on the guitar.

After Moon Duo, NY’s Woods mesmerized with a tripped-out opening and all their quintessential hits. The festival ended with Real Estate, who, like many of the bands, craft anthems for our times. Take these lines, from “Green River”: “Hey green river, what can I do?/If it’s alright I’ll walk next to you/Sit in the shade of your beechwood trees/Don’t you know these days I ain’t hard to please.”