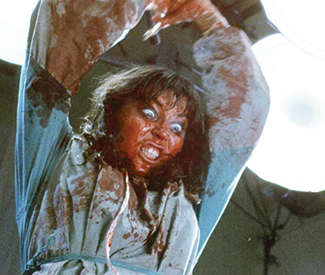 FILM The B-movie is alive and well in modern cinema, running the gamut from SyFy dreck like Sharknado (2013) to the populist (and Oscar-winning) entertainment of Quentin Tarantino. But there was a time when an even “lesser” kind of film thrived, something less commercial than the genre film or the indie. These were films experienced communally, in dark, dirty movie theaters, with like-minded cinema adventurers, as well as in the company of perverts, weirdos, and people looking for a cheap place to sleep. Yep, we’re talking about the grindhouse: grade-Z movies and X-rated films.

Possessing a preservation spirit similar to that of the late Mike Vraney’s fanatical Something Weird Video, VS shares its Connecticut headquarters with film restoration lab OCN Digital Labs (also run by Rubin and Lewis) and has built its small cult following through delivering consistently high-quality releases of long-forgotten gems, all mastered in-house from original camera negatives. The year ahead bristles with promising releases from San Francisco luminary Alex deRenzy and gay icon Wakefield Poole, as well as a streaming service called Skinaflix, which promises rare erotica in full HD. VS also caters to horror fans, teasing a slew of titles that includes a 4k restoration of Troma’s groovy Graduation Day (1981), as part of a multi-title deal with the company.

Some of these films are tremendously amateur and that’s half the fun. For today’s burgeoning cinephile audience, it’s exciting to see films that give the finger to established tenets of scriptwriting and mise en scène. In many ways, the crazy-passionate filmmakers of the grindhouse circuit were closer to true auteurs than the filmmakers we see today, and they were thriving in a time when low budgets led to some truly inventive shortcuts. Below, some highlights (and/or lowlights, and I mean that in the best way possible).

Alice, a young New York City hippie, receives an obscene phone call and is so taken by the experience that she sets out to find the caller. Along the way she bumps into a number of colorful characters who would impede her quest, and the film culminates in a surreal series of scenes involving a man in a pig mask and hypersexual animation. Shot in black and white, and featuring a magnetic performance from Laugh-In performer Sarah Kennedy, writer-director Nelson Lyon’s film is a quirky and calculated trip into the New York underground.

In 1954 Kansas, Miss Wyckoff (Anne Heywood) is a teacher who discovers that her solitary lifestyle has resulted in early-onset menopause. Her psychiatrist (the ever-delightful Donald Pleasence) suggests she find a lover, and her attempts to embrace the unfamiliar landscape of her femininity result in disappointment, sexual assault, and a thoroughly unhealthy relationship with the school janitor. Based on the novel by William Inge (with a screenplay by Polly Platt, who also wrote that year’s Pretty Baby), it offers a fearless look at sexuality and racism in an era that rarely engaged such hotbed issues.

Horror anthologies were big in the 1980s, but Night Train to Terror came about in an altogether unfamiliar fashion. Director Jay Schlossberg-Cohen took three feature-length films, chopped them down to about 20 minutes each, inserted claymation gore scenes and crude-looking monsters, and filmed a wrap-around story about God and the devil on a train with a New Wave dance band. All these poorly advised decisions came together to create a truly disorienting, hilarious throwback experience that would play well at your favorite bad movie night.

This double feature from notable adult filmmaker Kemal Horulu is a formidable starting point for someone unfamiliar with the genre. Virgin and the Lover is a lighthearted tale of a young man having difficulty with his strange feelings of love for a mannequin, and Lustful Feelings is the downbeat ordeal of a woman who enlists in the sex trade to pay off her drug dealing boyfriend’s debt to the mob. If you’re too young to have seen an adult film with a plot before, prepare to have your assumptions shattered.

For a deeper look at the adult film industry of the 1970s, A Labor of Love is a fly-on-the-wall documentary about Iranian filmmaker Henri Charr, who ran out of money while making his independent film The Last Affair. Desperate for funding, Charr agreed to shoot a number of adult scenes to increase the likelihood of a profit for his investors, and what follows is an account of a cast and crew with no background in the adult scene attempting to make a professional and meaningful adult film. The actors and crew are brutally honest in their unfamiliarity with the production’s new direction, and a number of the challenges that arise on set are a far cry from Hollywood’s usual horror stories. *