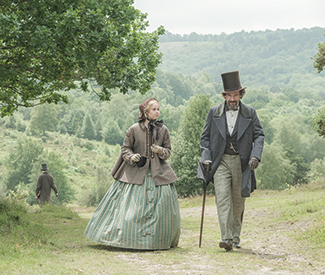 FILM No one reads Uncle Tom’s Cabin today — Harriet Beecher Stowe’s enormously popular novel that almost single-handedly tilted public opinion against slavery enough to support the Civil War — for anything but historical-footnote interest. Yet fellow 19th-century celebrity author Charles Dickens, who had nearly as direct and significant a reformist influence across the Atlantic, is still ubiquitous.

Dickens fairs and staged versions of A Christmas Carol are annual rituals; even people who’ve never read the books or seen the umpteen movie versions recognize the titles Oliver Twist and Great Expectations. As with (the very different) Jane Austen, Dickens still delights in the realms of rich characterization, absorbing narratives, and re-readability — qualities that are very much the same ones his original readers adored.

The thread of social critique to his work comes through less strongly today, when we’re more accustomed to brute realism. Indeed, Dickens can seem too genteel in his descriptions of squalor and suffering — like Stowe, he wrote in an era when an author could be dismissed as “vulgar” for rendering unpleasant matters too vividly unpleasant. (God forbid he or she should do more than faintly imply the existence of prostitution, for instance.) Dickens was a regular scold of the British class system and its repercussions, particularly the gentry’s general acceptance that poverty was something the bottom rung of society was suited for, perhaps even deserved. Beyond expressing indignation in fiction, he lectured, petitioned Parliament, sponsored charities, and personally co-founded a home for the rehabilitation of “fallen women.”

Given how many in positions of power would have preferred such issues go ignored, it was all the more important their highest-profile advocate be of unimpeachable “moral character” — which in the Victorian era meant a very high standard of conduct indeed. So it remains remarkable that in long married middle-age he heedlessly risked scandal and possible career-ruin by taking on a much younger mistress. Both she and he eventually burned all their mutual correspondence, so Claire Tomalin’s biography The Invisible Woman is partly a speculative work. But it and now Ralph Fiennes’ film of the same name are fascinating glimpses into the clash between public life and private passion in that most judgmentally prudish of epochs.

Framed by scenes of its now-married, still-secretive heroine several years after the central events, the movie introduces us to a Dickens (Fiennes) who at mid-career is already the most famous and popular man in the UK, with an enormous readership well beyond its shores. In his lesser-remembered capacity as a playwright and director, at age 45 (in 1857) he hired 18-year-old actress Nelly Ternan (Felicity Jones) for an ingénue role. He was instantly smitten; she was, at the least, awed by this great man’s attention. Their professional association permitted some further contact without generating much gossip. But eventually Dickens chafed at the restraints necessary to avoid scandal — no matter the consequences to himself, let alone his wife, his 10 (!) children, or Ternan herself.

Fiennes, by all accounts an exceptional Shakespearean actor on stage, made a strong directorial debut a couple years ago with that guy’s war play Coriolanus (2011) — a movie that, like this one, wasn’t enough of a conventional prestige film or crowd-pleaser to surf the awards-season waves very long. But they’re both films of straightforward confidence, great intelligence, and unshowy good taste that extends to avoiding any vanity project whiff.

By the standards of most modern movies set in this era, Invisible Woman is perhaps a little too measured, melancholy, not “romantic” or sumptuous enough. It’s not a feel-good costume drama, despite having most of the ingredients for that (famous people, star-crossed love, etc.) Like Coriolanus, it’s a bit somber, thinky, and vigorously unsentimental.

Fiennes (who purportedly only took the role after another actor he’d cast dropped out) is very good as usual. You could put together an extraordinary retrospective of roles he’s played onscreen so far (and a dismaying smaller one of the few he was flat-out wrong in, mostly incongruous mainstream duds like 2002’s Maid in Manhattan and 1998’s non-Marvel Avengers), yet few major actors have done so good a job of circumventing the attention they’ve earned. Jones is also fine, though the jury remains out on whether she’ll turn out an actress as interesting as she is polished (and pretty). She’s a little stiff here, a deliberate choice that nonetheless makes the film a few degrees less emotionally engaging.

The entire cast (also including Kristin Scott Thomas as Ternan’s cautiously approving actress mother, and Tom Hollander as the author Wilkie Collins) is impeccable. But in a quiet way the movie is almost stolen by Joanna Scanlan’s Mrs. Dickens — a great squat, stolid lump of a woman, like Queen Victoria herself, but painfully aware of her social and physical lacks.

One sequence that might seem invented and improbable is based on fact: Dickens cruelly made his by-now-wised-up wife deliver a present to his mistress, a means of asserting his ersatz blamelessness that could only acutely humiliate the two women who best knew otherwise. Even today, large women are so seldom portrayed as anything but nasty and/or comedic that Scanlan makes a striking impression simply for taking an important, non-stereotypical role here. But beyond that, her wounded dignity in the few scenes allowed her is heartbreaking. *