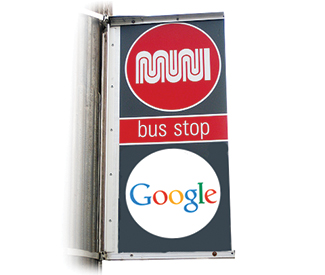 Using bus zones for private passenger pickup is not legal — but so far, that hasn’t resulted in any kind of systematic enforcement. It did boil over as an issue when it became the focal point of the Dec. 9 Google bus blockade, a Monday morning rush hour episode staged by anti-gentrification activists that went viral thanks to Bay Guardian video coverage, spurring commentary by Wall Street Journal, Fox News, and dozens of other media outlets.

The significance of the private buses as a symbol for an economically divided San Francisco, private service that spares a high-salaried class of workers from the delays, crowds, and service breakdowns that can plague Muni, has never been more resonant. The shuttles are frequently mentioned in conjunction with eviction and displacement, since apartment units in proximity to shuttle routes have become more desirable and expensive.

And as more shuttles are sent out to transport passengers, the San Francisco Municipal Transportation Agency has come under increasing pressure to solve the logistical and other problems they create.

“Our policies are catching up to this new transportation mode,” SFMTA spokesperson Paul Rose said in a recent phone call. “The shuttle service has been growing very rapidly.”

Accordingly, SFMTA is working on a pilot program to allow Google and other providers of private shuttle buses to share space in Muni bus zones in an organized fashion. The policy would establish a set of guidelines around boarding and alighting, implement measures to prevent Muni delays, create a formal permitting process, and require the shuttles to display identifying placards.

Although Muni needs funding to improve its aging infrastructure (see “Street Fight”), this plan to accommodate private shuttles would not result in any new revenue collection for the agency. Google and other private shuttle providers would be charged a fee under the program, but it would go only toward cost recovery, allowing the agency to break even.

Leslie Dreyer, one of the masterminds behind the Google bus blockade, calculated that the SFMTA could theoretically collect $1 billion if it aggressively targeted private shuttles for violating the Curb Priority Law, which prohibits vehicles other than Muni from using designated bus zones.

“It’s a ballpark estimate,” Dreyer said, describing her project as more of a thought experiment to illustrate a broader point. “We were trying to get people to think about … the bigger issue of what these things symbolize: evictions, gentrification.”

Dreyer based her findings on a color-coded chart released by SFMTA in July, showing the frequency of shuttle stops at 200 known locations. Paul Rose insisted the $1 billion estimate was too high because the total number of daily private shuttle trips is actually lower. He added that it’s more than just Google that is using the stops: At least 27 institutions and employers provide private shuttles in SF, according to data compiled by SFMTA.

But even based on the information that Rose provided, that same calculation shows that Muni could collect $500-600 million in fines from all the shuttle providers. That’s theoretically enough to augment a sizeable portion of Muni’s annual operating budget, which is around $800 million.

The pilot program for sharing bus zone space with private shuttles is expected to be reviewed by the SFMTA board early next year, and it could be implemented by July of 2014. It does not require approval by the Board of Supervisors.

In the meantime, given that Google and other private shuttle providers are in rather obvious violation of a law prohibiting them from doing what they do every weekday like clockwork, why doesn’t the SFMTA bother to enforce the law?

Rose offered several answers to this question, but most just pointed to more questions.

The fine for violating the law that prohibits vehicles other than Muni from using bus zones is $271, Rose confirmed. According to a Strategic Analysis Report prepared for the SFMTA in June of 2011, which notes that the Curb Priority Law is part of the City Transportation Code, “enforcement … has been limited.”

“We have only so many resources, and most enforcement is based on complaints,” Rose explained.

But the same strategic analysis report, dating back to 2011, shows that a great number of complaints have flowed in from disgruntled transit riders.

“The frequency of public comment and complaints regarding bus zone conflicts … may indicate a more problematic situation than these limited data imply,” a portion of the 2011 study noted after presenting the results of a field study, in which some analyst was presumably sent out to physically observe the private shuttle buses (illegally) stopping in the bus zones.

Rose’s contention that a lack of complaints was behind the lack of enforcement didn’t really seem to hold up, but he offered another reason, too. “We’d have to ID the bus,” he explained. “There isn’t an identity placard or permit to ID them specifically.”

Establishing an identification system is one of the goals of the pilot program now under consideration, he added. Then again, Google buses have license plates. And if SFMTA has the capability to do anything well, it’s to harness license plate data as a mechanism for collecting fines from offending motorists.

In fact, officers under the parking enforcement division of the SFMTA use an automated system called AutoVu Patroller, made by a tech company called Genetech (not to be confused with Genentech, a pharmaceutical giant that has its own fleet of buses transporting San Francisco employees to its South Bay campus).

The AutoVu patroller starts automatically when a parking enforcement officer fires up the on-board computer. It works by scanning license plates as the parking vehicles cruise down the street, using plate recognition technology to feed the data into a system that checks the identifying numbers against an existing hotlist.

When a hit occurs, it’s automatically flagged on screen. With the flick of an index finger, an enforcement officer can instantly bring up a vehicle’s model, year, and VIN. If a vehicle lacks a permit, it automatically generates a hit, signaling that enforcement may be needed. Then there’s the obvious point that Google buses and other shuttles are highly visible, and stopping all the time — whether or not an enforcement officer has a license plate scanner or not.

But at the end of the day, the private shuttles are treated differently from other kinds of vehicles that are found to be in violation of the transportation code. No matter what the laws on the books say, it’s difficult to imagine the SFMTA or the SFPD, which also has enforcement power, causing tech employees to be late to work as they roll through the city in climate-controlled coaches with tinted windows.

Far from targeting the shuttles for enforcement, an in-depth conversation has actually been taking place between the shuttle providers and SFMTA for quite some time, with representatives from the Planning Department and other agencies brought to the table as well.

The SFMTA actually regards the shuttles as being somewhat helpful, Rose said, since they get drivers out of their cars and into pooled transportation modes, thereby helping to alleviate congestion.

“We are developing these policies to better utilize the boarding zones for these shuttle providers,” Rose explained. “What we’re trying to do is provide a more efficient transportation network.”

To that end, the city has organized a series of stakeholder meetings in recent years with Google, Apple, Adobe, Genentech, the University of California San Francisco, and other shuttle providers to design a way for Muni buses and private buses to coexist in harmony, in city bus zones. Those conversations were referenced in the 2011 report; three years later, the pilot program is expected to solidify those discussions into a formalized system.

Here and there, some bus zones have already been altered to accommodate the private shuttle buses. “[An] extension of the Muni zone on 8th Street (in the South of Market) appears to be working well; although SFMTA Staff report that shuttle operators using the new zone have balked at the suggestion that they should help pay for the $1,500 improvement,” the 2011 strategic analysis noted.

The plan that’s coming down the pipe will essentially serve to legitimize what the shuttles are already doing. But so far, this deal won’t result in any financial gain for the transportation agency. If it goes forward as planned, the opportunity to make transit improvements by collecting revenue from private companies that use public infrastructure will be passed up.