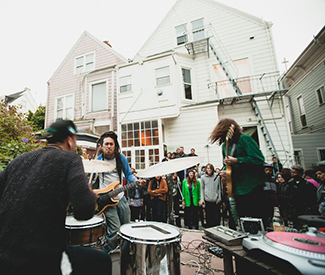 MUSIC It was decided — my BFF-roommate and I would host a rock ‘n’ roll show, and like many of our favorite activities (feasting, boozing, twirling), we became set on throwing said party from the comfort of our own home. Denying our fears of venue hunting, financial commitments, and general hassle, we focused on the power rewarded to the classic hostess with the mostest; the ability to control all elements of a dirty bash and adjust them to our liking.

What bands will play? Ones we like, who also like each other. What kind of liquor will be present? Whiskey, no exceptions. What kind of snacks might we serve? None, people should bring us burritos (or in my case, homemade kimchi and quinoa — a foul smelling food for a social event that did wonders for curbing my potential hangover). Not only was this party to be at our house, but this little rock shindig would blast from our backyard on a (hopefully sunny) Sunday afternoon. Day drinking to shredding guitars? The neighbors were going to love it.

We nailed down a date and who would play, rounding out the bill with some hip DJ acquaintances. A buddy drafted a flier and the process of inviting humans began. The presence of close friends was expected and offers for help were not denied. Then we cast the net, awkwardly approaching yoga teachers, favorite baristas, local celebrities, and secret crushes. The boyfriend promised to roll deep with eligible males of various sexualities and I may have plotted some (later to be discovered unsuccessful) matchmaking. We urged bands to cart along their musician homies and peed at the thought of John Dwyer or Wymond Miles walking up our stoop in the halo of afternoon light.

Of course we had no legitimate way of predicting who would actually show up. Expect everyone who confirms to flake and everyone who rejects to bring a pack of wingmen. We crossed our fingers and braided our hair, then calmed our nerves by remembering that even if all bailed, the bands were confirmed. A show in our yard is still a show in our yard. Guaranteed win. Oh yes, and we had a fuck-ton of beer — free of charge. We miraculously managed to get the party “sponsored,” which allowed us to collect donations for the dudes on stage. Major bonus.

While party planning seemed to be sailing, our biggest concern loomed: the noise complaint. A similar party we hosted in June garnered 22 calls to the SFPD — thankfully our only injury was a slap on the wrist and some sneers. In anticipation of upset, I baked a batch of chocolate chip cookies from mom’s recipe and skipped up the stairs of the neighboring stoop, treats in tow.

With the oldies next door sugared up, I called the SFPD for the lawful scoop and learned that cop arrival is completely tattletale-based. Officers can only issue a citation if the party pooper signs a citizen’s arrest. This is why you ALWAYS INVITE THE NEIGHBORS. If the uniforms still rap on your door: answer it, shoot the shit, and promise to cool it, ASAP. Our biggest takeaway: short sets. By the time the doorbell rings, they’ll be singing the encore. “It’s their last song, officer. I promise,” perfectly compliments a drunk wink.

So, after weeks of planning and a morning full of chaotic setup, we were crazy high on anticipation. I forgot to shower. I drank everyone’s coffee. I zoomed down the block for incense — “to set the mood,” I shouted. And then all we could do was wait for the madness to begin.

Heads banged. Hair was tangled. Happiness was found at the bottom of countless empty cases. People climbed the fire escape for a better view of the bands, while my exes pleasantly mingled in the garden below. The cops dropped by, as anticipated, but left without trouble. My dream of getting a mug shot will have to wait.

The freedom of a privately hosted show put everyone in a tender mood and it felt overwhelmingly blissful to support local music in independent fashion. The party was a complete success, depending on how you measure extreme happiness and unfathomable coolness. And OK, we were hammered. Everything is a delightful blur and I ended up wrestling in the gravel. You can do what you want at your own house — people can’t say shit. All the more reason why we’re already planning the next round. See you there.