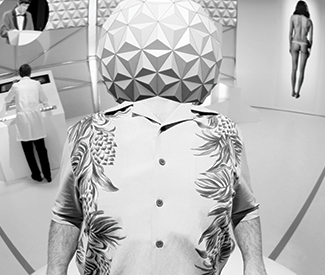 FILM Escape From Tomorrow acquired cachet at Sundance this year as a movie you ought to see because it probably wouldn’t surface again — not because it was that bad, but because any regular release seemed sure to be legally blocked. The reason was its setting, which composites two of the most photographed (and “happiest”) places on Earth. They’re also among the most heavily guarded from any commercial usage not of their own choosing.

That would be Disney World and Disneyland, where Escape was surreptitiously shot — ingeniously so, since you would hardly expect any movie filmed on the sly like this to be so highly polished, or for its actors to get so little apparent attention from the unwitting background players around them. (Let alone from security personnel, since as anyone who’s ever tried to do anything “against the rules” at a Disney park can tell you, those folks are as omnipresently watchful as Big Brother.)

Disney does not have a history of taking perceived affronts to its brand lightly. One movie that never did never make it past its festival bow was 2002’s The Sweatbox, an excellent behind-the-scenes look at the animated feature that eventually emerged as 2000’s The Emperor’s New Groove. That was a fun movie, but completely different from the far more ambitious narrative its first round of creators envisioned, only to have years of work curtly dismissed with a “start over from scratch” memo from top executives mid process. Though green-lit by the studio itself, its directors given full warts-and-all access, The Sweatbox turned out so heartbreakingly revealing (and so unflattering toward the aforementioned execs) that the studio shelved the finished product after its Toronto International Film Festival premiere. It hasn’t been seen since … at least not legally.

So there seemed little hope for Escape, which is anything but “authorized.” You don’t have to be a Disney lawyer to imagine how it could be seen as copyright infringement, a slander of sorts, or outright theft. That nobody has pulled the fire alarm, however, suggests Disney realized this movie isn’t going to do it any real harm. And perhaps more importantly, that a lawsuit would provide a publicity gold mine for the naughty filmmakers while hardly keeping viewers away in the long run. (Todd Haynes’ infamous, Barbie-enacted 1988 biopic Superstar: The Karen Carpenter Story has been “banned” since 1990, thanks to unamused sibling Richard Carpenter. Surely by now he’s aware his actions helped make it perhaps the most widely seen “unseeable” movie in history; as of this writing, there are 10 copies on YouTube alone.)

Anyway, Escape From Tomorrow is here, in improved form even. Nearly 15 minutes cut since Sundance have made all the difference between a clever, albeit slightly overstuffed, stunt and something uncategorizable yet fully realized. While its illicit setting remains near-indispensable (another big family theme park probably would have worked, too), what writer-director Randy Moore has pulled off goes beyond great gimmickry. His movie’s commingled satire, nightmare Americana, cartooniness, pathos, and surrealism recalls a few cult-fabled others — Eraserhead (1977), Parents (1989), even Superstar — mostly alike only in going so far out on their very own twisted limb.

We’re introduced to average, 40-ish Jim (Roy Abramsohn) the morning of the last day of his family vacation. He’s on their hotel room balcony, taking a phone call from his boss — who cheerfully fires him sans explanation. As Jim sputters in disbelief, approximately seven-year-old son Elliot (Jack Dalton) mischievously — or malevolently — locks the sliding door from the inside, then crawls back into bed beside still-sleeping mommy Emily (Elena Schuber), leaving dad stuck outside in his skivvies. Thus the film’s two major paths for interpretation are introduced right away: What follows might either be hallucinated by shell-shocked Jim, or really be a grand, bizarre conspiracy (usurping son included).

This final day is to be spent doing, well, what you do with kids at places like this. Elliot wants to go on certain rides; little sister Sara (Katelynn Rodriguez) often wants to do different things. Their parents, when separated by conflicting child demands, stay in touch via cellphone — or don’t, to Emily’s exasperation. Jim has a tendency to get distracted by … things, like whimsical park characters that suddenly grow menacing fangs (thanks to the wonders of digital post-production) only he notices, or the two barely-legal French girls frolicking in short shorts (Danielle Safady, Annet Mahendru) who seem to be deliberately exciting his lascivious interest at every turn.

Then there are the disquieting rumors of a “cat flu” epidemic; the wife’s rebuffing all physical affection; a very weird interlude with a fellow park guest (Alison Lee-Taylor) whom Jim abruptly finds atop his bound, naked self, barking “Fuck me! Feel my vagina!;” and assorted other occurrences either imaginary, or apocalyptic, or both. Emily’s irritated accusation “Did you black out again?” is as intriguing and baffling as the full-blown sci fi-horror plot Jim finds himself the center of — or at least thinks he does.

Lucas Lee Graham’s crisp B&W photography finds the natural noir-slash-Carnival of Souls (1962) grotesquerie lurking in the shadows of parkland imagery. Abel Korzeniowski’s amazing score apes and parodies vintage orchestral Muzak, cloying kiddie themes, and briefly even John Williams at his most Spielbergian. All the actors do fine work, slipping fluidly if not always explicably from grounded real-world behavior to strangeness — clearly they were given the explanatory motivational road map that the audience is denied. But then the real achievement of Escape From Tomorrow, more than its sheer novelty of concept and aesthetic, is that while this paranoid fantasy really makes no immediate sense, Moore’s cockeyed vision is so assured that we assume it must, on some level. He’s created a movie some people will hate but others will watch over and over again, trying to connect its almost subliminal dots. *

ESCAPE FROM TOMORROW opens Fri/11 at the Roxie.