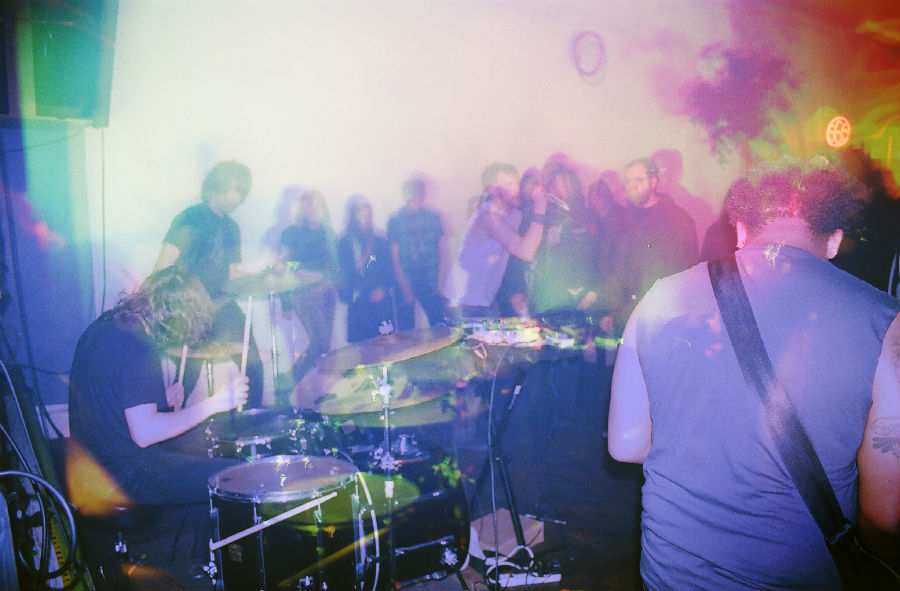 The band Negative Standards is essentially a crust art project.

While maintaining d-beat chords and sludge-like breakdowns, the Oakland-based group makes use of non-instrumental noise and videos created by the band’s bassist, Will, during shows.

And as a quartet that blends elements of crust, doom metal, and noise; Negative Standards sticks out like a sore thumb in the endless sea of fellow crusty brethren and fuzzy lo-fi that exists in the East Bay.

Anonymity is key for the band. Negative Standards sticks to Roman numerals in place of song titles and prefers not to have band members names attached to the project. While being interviewed, the guys chose to keep it on a first-name basis.

So, for housekeeping purposes, the band is as follows: Al on guitar, Will on bass/video, Max on drums and noise, and Will — who wasn’t interviewed — on vocals and non-instrumental noise.

According to Will, the choice to maintain anonymity is to let the music speak for itself.

“From the beginning, the idea was to present each recording as a coherent whole, rather than just a collection of unrelated songs, and doing it this way somewhat anonymizes the individual components,” Will says. “Another effect is that the lyrics, music and samples have to speak for themselves, not having been distilled into a name or a slogan.”

The band makes the conscious decision to only play all-ages shows to battle the age-old problem of gentrification in the Bay Area.

Drummer and non-instrumental noise creator, Max, expands on this idea: “Gentrification and the attendant cultural colonialism of bars and ‘the underground’ is threatening the existence of DIY all ages spaces in the East Bay more with each passing year,” Max says. “It makes sense that, as a band, we would want to resist the destruction of the cultural environment that has made our existence possible.”

Guitarist Al recalls going to Berkeley’s world-famous all-ages punk venue, 924 Gilman when he was growing up. Al believes that without all-ages venues such as the Gilman, bands like theirs would not exist. Everybody has a starting point, and Al credits the Gilman as his.

“If it weren’t for this place, I wouldn’t know most any of my current good friends, let alone be in this band,” Al says. “I think it’s important to support the future punks instead of shutting them out because you want to drink.”

The band credits the Bay Area for having a thriving scene with the likes of fellow bands such as Noothgrush,Permanent Ruin, Ordstro and Vaccuum. But like most to all existing punk scenes, there exists various isms.

“Seeing the amount of misogyny, transphobia, and racism that goes totally unchecked within some corners of our supposedly ‘radical’ scene can be pretty disheartening, but there’s also some incredible people working against those normative tides,” says Will.

Negative Standards, however, is leaving the sub-cultural hub of Oakland to embark on a European tour, playing with the likes of European punks Bacchus and Throwers.

“Vendetta Records from Germany put out our LP and hooked us up with Timo from Alerta Antifacista Records, who busted his ass to put this tour together for us,” Al  says. “I’m incredibly excited. I’ve never travelled in Europe before and am looking forward to it greatly.”

The band also has a split LP with doom band Whitehorse coming out on Vendetta Records in October.

Most of the band remains extremely cordial and modest, lauding other bands and the proverbial scene at large (for the most part). But as mentioned before, this band sticks out amongst others and Max is sure to break the tide.

“Fuck this false modesty,” Max says. “I defy you to name another local band that has both a totally gnarly wolf AND an outlandishly colored manatee on their van’s dashboard.”