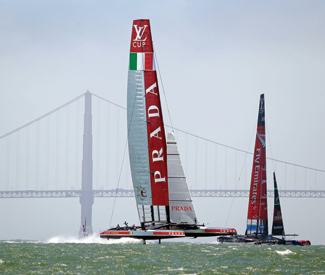 After a week of one-boat “races,” an argument over rules, and an angry sponsor making waves in international media, it would be easy to write off the America’s Cup as the lamest party in town (so lame, in fact, that the organizers have ceased broadcasting the one-boat shows on YouTube).

But, it was a week of wins for Emirates Team New Zealand, most obviously the solid drubbing they delivered to Luna Rossa on Saturday (7/13) during the first race at which two boats actually showed. A smart “hook” by ETNZ blocked Luna Rossa from the start line and gave the Kiwis a five second advantage that stretched to over five minutes during the seven legs of the race. Unfortunately, that was the peak of the action as the gap between the boats grew so great and Luna Rossa officially earned a “did not finish” result for exceeding the five minutes allowed to cross the finish line after ETNZ. Overall, the match was almost as boring to watch as the single-boat snoozefests of earlier in the week, however it did show off the capabilities of the Kiwi crew, who are clearly mastering foiling while jibing, a key move for maintaining high speeds downwind. Which brings us to the other big win for the New Zealanders this week. On Thursday, the international jury ruled in favor of ETNZ and Luna Rossa, who protested a new rule requiring larger, symmetrical rudder elevators as a matter of safety. The jury decided that allowing the larger rudder elevators — which Oracle have been using on their boat since they relaunched in April after a pitch-pole in October destroyed their wing sail — would violate the AC72 Class Rule that governs the design specifications of the boats.

They said regatta director Iain Murray couldn’t change this rule without buy-in from all the competitors and that voluntary compliance of the other safety rules would appease the Coast Guard, which permitted the event based on the additional safety measures made after Andrew Simpson died. The rudder elevators help stabilize the lightweight boats while foiling, or lifting off the surface of the water to hit speeds of over 40 knots — ETNZ saw 42.3 on the speedometer on Saturday while Luna Rossa maxed out at 39.9 knots. The crew that masters this move and can maintain it over the course of a race will likely come out ahead. ETNZ is doing it now and will likely get better and better at it over the coming weeks as they continue to race the course through the multiple round robins of the Louis Vuitton Cup.

Meanwhile, Oracle will have to return to the drawing board and Ellison’s crew will need to get out on the water and re-learn how to handle their boat with a new rudder that complies with the Class Rule. Oracle has been tight-lipped on the subject, with just a brief statement from general manager Grant Simmer on the jury’s decision. “We continue to support the Regatta Director and we believe all teams have benefited from his review. We don’t have an issue complying with the Class Rule, and we will be ready to race under the rules affirmed by the Jury.” However, they may have an issue playing catch-up to the Kiwis, who have a lot on the line. If they aren’t able to wrest the Auld Mug from Larry Ellison’s hands, it’s likely the New Zealand government won’t chip in for a future campaign — especially if high-tech, billion-dollar boats remain the name of the game. The Kiwis have already chalked up four points and will need to win just one more of the next three bouts with Italy to advance to the Louis Vuitton Cup semifinals, during which the Swedish team, Artemis, should be back on the water. Spectators won’t see Oracle on the course until September 7, when the America’s Cup final matches commence, however there should be plenty of opportunities to observe their practice sessions with a newly rule-compliant boat. To that end, it’s worth noting that situating the race close to land for the first time in the Cup’s history, and with a short course completed in multiple laps, was supposed to draw crowds to the shoreline and the television screen. Now that I’ve seen the boats live and on television, I have to admit that so far it’s still a pretty boring sport to watch. Standing near the start line at Marina Green or the finish line at Piers 27/29 may get you flashes of action and watching it on television is like watching a video game.

The best of both worlds is to park as near as possible to the water and get your hands on a portable marine VHF radio tuned to channel 20, which transmits the official America’s Cup broadcast. Then you can hear details on speed and tactics while actually seeing the most unforgettable part of this race — the boats jibing downwind, hitting freeway speeds while foiling with spray flying and crewmembers bouncing from one hull to the other.

That’s still drawing gasps and cheers from the crowd.