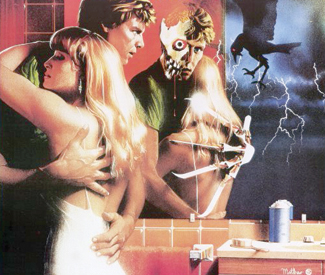 FRAMELINE FILM FEST In 1985, a new family moved into Nancy Thompson’s house on Elm Street. Though the stairs no longer had the consistency of sloppy oatmeal, the window bars remained — and a certain razor-fingered fellow still lurked in the shadows. Teen hunk Jesse soon encountered Freddy Krueger in, where else, a nightmare — though this time, the murderous Freddy had a high-concept scheme: “You’ve got the body, and I’ve got the brains!”

Released just a year after 1984’s A Nightmare on Elm Street, A Nightmare on Elm Street 2: Freddy’s Revenge vexed fans (and Nightmare creator Wes Craven) with a storyline that enabled its formerly dream-bound villain to kill in the real world. But Nightmare 2 eventually earned a cult following, largely due to readings of the film that identified its gay subtext: a leather-daddy gym coach; the fact that Jesse had a hotter relationship with his best friend than his girlfriend; Jesse’s butt-bumping dance moves and effeminate screams; and lines like “Something is trying to get inside my body!” Plus, that campy scene involving an exploding parakeet.

Is it any wonder that Midnight Mass hostess Peaches Christ chose Nightmare 2 for Frameline’s late-night spotlight, with star Mark Patton in attendance? These days, the erstwhile Jesse lives in Puerto Vallarta, Mexico, where he runs a thriving gallery and boutique business with his husband, Hector.

“I left show business really consciously, shortly after Elm Street. There really was no way to get ahold of me, so my sister-in-law was my interlocutor when people would call. At the beginning, many people did, and I would turn them down. As time went by, she just collected royalties for me and that type of thing,” he says. “But then these guys from a documentary called Never Sleep Again [2010] — which is about Nightmare on Elm Street and 20th century pop culture — called. They said, ‘We have Johnny Depp, Patricia Arquette — literally everybody [who was in the series], except for you. And we’d really like to talk to you, since yours is one of the more interesting Elm Street films.’ I agreed, and almost overnight the publicity was pretty overwhelming. It turned out I was called ‘The Greta Garbo of Horror,’ and everybody wanted my autograph. It had become very valuable over the course of time!”

Patton has since met Nightmare 2 fans from all over the world, including queer folks who grew up inspired by his performance. “When I did Never Sleep Again, they put up a Facebook page for me and I had 5,000 people within maybe a week or two. At this point, I have a couple of different Facebooks, a website — around 30,000 people altogether. It seems like a lot of boys wanted to follow Jesse home from school,” he laughs.

As an openly gay man, Patton embraces the film’s legacy, though he doesn’t regret leaving Hollywood behind. “My [Nightmare film] is called ‘the Homo Nightmare on Elm Street.’ Basically, I played a girl’s part; it caused controversy at the time, and it still does. Out Magazine just named it the gayest horror film of all time, and I was the number one scream queen in the world, according to Out and the Advocate,” he says. He has fond memories of making the film, but “what I really wanted to do was have a conversation about it. The people who wrote the movie always swore that they had no intention of writing a gay movie, so a lot of [the fallout] was sort of put on my back at the time. It damaged my career in a lot of ways, but it wasn’t something that I couldn’t overcome.”

Still, “I got tired of the BS in show business. I’d been in it a long time, and I’d been successful enough to know what that felt like,” he says. “I wanted a certain kind of life, and I found another way to do it that was just as lucrative and entertaining and creative to me. I would rather be embraced for my homosexuality than stay in the closet my whole life.”

After a few years spent touring with the documentary and making stops on the horror-convention circuit, Patton — who donates most of the money he earns from appearances, and the t-shirts he created “based on things people had said about me on the internet, like ‘Jesse’s A Homo’,” to the Trevor Project — is ready to settle back into his life in Mexico.

“I sort of reclaimed a part of myself, which was really cool. And I got to travel and taste a little bit, at my age, of what it was like to be a movie star again,” he says. “It’s been a lot of fun, but I’m coming to the end of my journey with this. San Francisco is going to be one of the last events that I do. In my heart, now’s the time to step away from it again because it’s not my life. I like my life here, and being with my family.”

With a chuckle, he adds, “Although I’m vain enough that, this event that’s coming up in San Francisco? I’m gonna love it. Fourteen hundred screaming drag queens and gay guys at the Castro Theatre — it really doesn’t get any better than that for someone like me!”