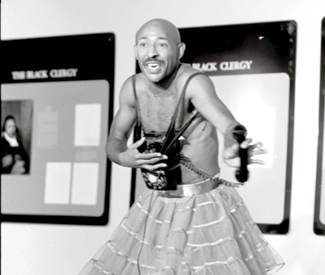 DANCE If you are even tangentially connected to San Francisco’s dance community, one name will pop up again and again: Ed Mock. He was part of San Francisco’s awakening as a center for arts on the edge before his death from an AIDS-related illness in 1986.

African American and gay, the performer-choreographer was, above all, a free spirit throughout the two decades he lived in SF. During that time, he influenced and shaped a generation of young artists. For dancers like Wayne Hazzard, Victoria Mata, Shakiri, Joanna Haigood, and Pearl Ubungen, he was crucial to who they became. Mock also collaborated with the young Rhodessa Jones; Ntozake Shange’s For Colored Girls Who Have Considered Suicide When the Rainbow Is Enuf… premiered in his studio.

One of the dancers whom Mock profoundly marked is Amara Tabor-Smith. To honor him, she created the multi-venue He Moved Swiftly But Gently Down the Not Too Crowded Street: Ed Mock and Other True Tales in a City That Once Was. The piece will wander through the city Sat/15 and June 21-23.

The SF-born Tabor-Smith encountered Mock when, at 14, she tagged along with a friend who had been told that classes with Mock were a must. She joined his Ed Mock Dance Company at 17 and stopped dancing for a year when he died. Eventually, she joined New York’s Urban Bush Women for a decade before returning to her much-changed hometown in 2006.

Talking with her after a rehearsal in early June, it quickly becomes clear that she not only mourns the passing of a pioneering artist but also a period when San Francisco was place for experimentation, openness, and a sense of the possible. The Beats and the hippies may have put their own stamp on the city, but in the 1970s the gay pride movement filled the air with champagne-like effervescence and expectations — until the AIDS epidemic cut it down. Lately, the tech boom has had a negative effect on SF’s artist population.

“Ed was the most fearless person I ever knew,” Tabor-Smith says, “He was the embodiment of freedom, courage, and mischief. I loved the way he embraced the risk of failure and the way he could create on the spot because the spirit moved him. He knew who he was and where he came from. He was an old soul, and he walked with the ancestors.”

Mock left his primary legacy through his classes, teaching wherever he could find studio space. Tabor-Smith remembers them as always packed with all sizes, colors, body shapes, and orientations — unusual for a time when teaching was much more compartmentalized than it is today.

He choreographed for his company, but as a dancer he improvised — a pioneering act in itself. Unfortunately, little documentation has survived. A YouTube search does turn up a video of Possum Slim, an astounding solo from 1979 performed by a naked and body-painted Mock.

Tabor-Smith (in collaboration with Ellen Sebastian Young) conceived of He Moved — part of Dancers’ Group ONSITE Series — as 11 site-specific performances that journey through Mock’s life. Among others, she is working with Jose Navarette on a section about memory; Jesse Hewitt and Laura Arrington will perform “acts of disruption” for Valencia Street’s 24/7 connected crowd.

Hayes Valley’s Salle Pianos and Events — where Tabor-Smith is rehearsing He Moved‘s “A Room of Black Men” section — happens to be next door to one of the studios in Mock’s peripatetic teaching career. She sees its funky elegance, with crystal chandeliers hanging over metal folding chairs, as “an Ed kind of place.” In stark contrast to the traffic roaring by on Market Street, the nine dancers bring a statuesque dignity and stillness to what is a tribute to black manhood. But they also explode into individual solos and help each other find community. At one point the dance becomes what looks like a ceremonial blessing around a seated elder, whose eloquence emanates simply from his presence.

Tabor-Smith also likes the Salle space because it’s located across the alley from Zuni Café, where her piece’s “Window Seat” section will be shown. Appropriately, “Ed was a fixture there. The people who ran it were wonderful. He never paid for a meal. Or a bottle of wine.” *

HE MOVED SWIFTLY BUT GENTLY DOWN THE NOT TOO CROWDED STREET: ED MOCK AND OTHER TRUE TALES IN A CITY THAT ONCE WAS…