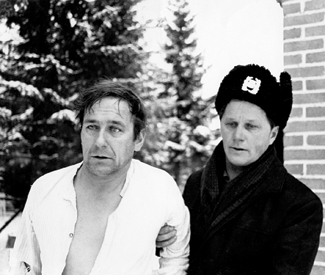 SFIFF “The greatest Finnish movie ever made” — drop that phrase on someone (at least a non-Finn) and they will most likely make some crack suggesting there can’t possibly be enough of them for the distinction to matter. But Finland has had a rich and idiosyncratic filmmaking history stretching back to 1907. It hardly begins and ends with Aki Kaurismäki, the droll minimalist who was the first (and still only) Finnish director to regularly win international distribution.

Evidence of that isn’t so easy to find, or especially to watch, however. When a few years ago the Pacific Film Archive hosted a retrospective of fascinating 1930s-40s melodramas by Teuvo Tulio, it was like finding a time capsule left by a forgotten civilization — contents strange, exotic, and sort of wonderful. One yearned for more. But chances to see classic Finnish cinema haven’t exactly flourished since.

So it’s no great surprise that “the greatest Finnish movie” — so say many folk, including Kaurismäki — should turn out to be one that you’ve very likely never heard of. Mikko Niskanen’s Eight Deadly Shots, which the San Francisco International Film Festival is showing in conjunction with Finnish film scholar-director-programmer Peter von Bagh’s receipt of this year’s Mel Novikoff Award, is a five-and-one-quarter-hour rural tragedy starring Niskanen himself as a poor farmer doomed by both self-destruction and a ruthless social system. It’s not an “epic” in the usual sense of narrative expansiveness. Rather, it’s an intimate, deliberately rough-hewn drama that simply takes a very long—but never dull—time to run its course. The SFIFF catalog aptly compares it to Zola. A modern literary comparison would be to the Canadian novelist David Adams Richards, whose bucolic New Brunswick characters likewise stumble drunkenly from one bad decision to another, hemmed in by poverty and despair, yet ultimately achieving a kind of grandeur in their haplessness.

Niskanen was himself from a poor rural background, and such a handful that his father threw him out at age 13. Nonetheless he retained a strong connection to the culture of small farms that typified Finnish life in his youth but was nearly extinct by his death at age 61 in 1990.

Growing into strapping adulthood, he had some success as a 1950s stage and film actor. A man prone to have a hand in everything, he naturally progressed to operating behind as well as in front of the camera. His 1962 feature directorial debut The Boys was widely praised, and commenced a pattern in which his projects almost invariably (even when they were based on someone else’s life or fiction) contained elements of autobiography: in this case portraying a childhood lived partly under wartime privations.

Youth and country life were two of his major ongoing themes. They reached their combined popular apex in his 1967 Skin, Skin, whose sexy young protagonists on rural holiday reflected the era’s rapidly evolving mores to unprecedented box-office success.

Very different was Eight Deadly Shots, directly drawn from a true crime: After serial scrapes with the law (mostly over his illegal brewing of moonshine), an impoverished small farmer had a standoff in which he shot to death several police officers before turning himself in. Niskanen poured a great deal of himself into the story, supposedly going a bit berserk for real when the climactic sequences were filmed.

With its portrait of a well-intentioned but reckless, none-too-bright, alcoholic, eventually suicidal and family-endangering character — one that, by the way, the imprisoned real-life model found painfully accurate when Niskanen showed him the film — the black and white film finds pathos in protagonist Pasi’s steady march toward disaster. He’s too weak to save himself, yet a society in which a small-time farmer can no longer support his loved ones is as much to blame for his downfall as the hooch brewed in a tub in the forest.

The supporting performances (many cast with nonprofessional residents from the shooting locations) can be amateurish at times, but Niskanen’s own central turn is pretty epic. So is the drama he ekes from the minutiae of rural life — a scene of Pasi coaxing his stuck horse out of a snow drift takes on an urgency that could only be earned by a movie that’s made clear just how few resources (animal, vegetable or mineral) this family has.

Expected to be an 80-minute feature, Shots instead wound up being a TV miniseries. (It was later edited down to a two and a half hour feature that’s considered inferior.) It was wildly praised by everyone, even the country’s president. But the much-married, restless Niskanen never experienced such success again, gradually falling into depression and self-pity as various ventures failed to put him back on top. As von Bagh’s own three-hour TV documentary about the late artist makes clear, he was a very complicated man. But no doubt in Finland, like everywhere else, the really creative people are usually a little bit mad.