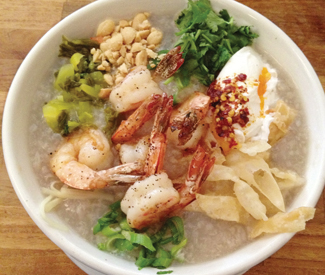 THE BLOB Your globe-trotting Blob is currently in her bustling hometown Detroit, gorging on favorite treats, including the kick-ass fried bologna sandwich at Mercury Bar, served on an onion roll with grilled onions, mustard, and local brand Better Made potato chip “smosh.” And of course that Motown favorite, Coney Islands (hot dogs in white bread buns smothered in chili and raw onions) which is everywhere, but best at the old school Lafayette Coney Island downtown. She has some favorite recent treats in SF as well, which she can’t wait to get back to inhaling.

JOOK NOOK AT B STAR BAR

The Blob is calling it: in terms of adventurous flavors, cute and spicy Burma Superstar offshoot B Star in the Inner Richmond has the best brunch going in SF right now. The Zen-lovely space draws a diverse crowd, the prices are “nice brunch” (satisfying entrees, $8–$13, from 10am-3pm) without getting opportunistic about it, and the menu includes Mexican favorites with a Burmese twist.

First, a couple piquant Bloody Marys ($6.75 each) and a dive into a good-sized cauldron of justly renowned roasted Brussels sprouts ($6.75), savory with furikake, fish sauce, and parmesan, but perked up perfectly with crispy popped rice. The star of the dazzling B Star brunch menu is a duck hash quesadilla — probably the least Burmese thing you can think of (roasted potatoes and veggies topped with two eggs over easy and zingy radish slaw), until you notice the “quesadilla” is in fact a platha, a delicately fried and spiced flatbread related to Indian paratha, similar in texture to a tortilla, but both more oily and flaky, giving the shredded duck a hearty base.

If you’re not a duck brunch fan (or you have a share-friendly companion) head to B Star’s yummy “jook nook” menu. The Blob is forever addicted to the home style, DIY version of the steamy-hot, Asian rice porridge comfort food served at Outer Richmond faves like Ton Kiang or Jook Time. But B Star’s gussied up big-bowl selection, starting with base ingredients like shredded chicken with thousand year old egg or pork sung with pickled mustard greens and fried noodles, comes loaded with all the extras, including scallions, chili, ginger, and peanuts. A dash of soy and your day is made.

A recent return to this genteel Mexican hotspot near Church and Market confirmed the Blob’s addiction to the crispy, crema-smothered, incredibly popular duck flautas there. Three huge tubes of delectable shredded quacker with cabbage and cotija cheese ($9) are enough for a filling lunch, but don’t deny yourself the pleasures of the rest of the menu. Feeling light and pescaterian? Splash into tangy ceviche de pescado with chunks of mahi mahi, avocado, and orange ($10), but maybe skip the ceviche de camarones ($10) — the Blob, a ceviche snob freshly back from a tour of the Southern Mexican coast, found the generous bits of shrimp overpowered by a bland, ketchupy cocktail sauce.

Don’t skip, however, an incredible pambazo (Mexican white bread bun stuffed with potatoes and chorizo and dipped in red guajillo pepper sauce, $6) or, if the duck’s left any room, juicy brisket-loaded soft tacos de saudero ($6 for two). Then go back for the pambazo’s big sister, torta ahogado ($10), a carnitas and pickled onion sandwich drowned in mild red sauce and eatable only with a knife and fork, and several napkins.

The new Farina pizzeria at 18th and Valencia, immaculately white-tiled and accented with neat portraits of vintage Italian comics characters (think Mary Worth in Naples), has become one of the latest flashpoints of the ongoing gentrification debate. The Blob detests the Borg, and $15 personal pizzas are a bit of a stretch — although there are $22 ones, though worthy, at Una Pizza Napoletana down the way at SoMa. The Blob’s orifice, however, was soon spattered with an excellently fiery, soft crust pizza diavolo, with spicy salame, San Marzano tomatoes, fior di latte mozzarella, romano cheese, basil and EVOO.

But she was truly blown away by the L Gnudi Alla Cosimo De Medici, i.e. several large spinach ricotta dumplings ($15), hefty balls of al dente pasta sheets, with the slightly chewy give of mochi, stuffed with wonderfully grassy shredded spinach and bathed in butter-sage sauce, a vegetarian treasure worth its own trip (with a glass of Italian red, natch).