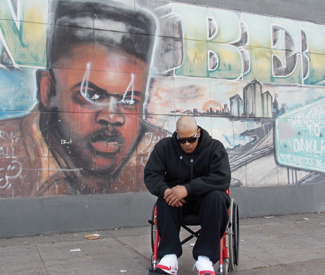 MUSIC “I have a new respect for people with disabilities,” Bay Area legend Saafir, the Saucee Nomad says, sitting in his wheelchair in the East Oakland living room where he’s temporarily crashing. “I was aware of their plight, but I never imagined how much strength it took mentally to deal with every day, day to day. It’s a cold strength.”

The extent of Saafir’s disability, revealed last month by Digital Underground leader Shock-G on Davey-D’s Hip Hop Corner blog, took the rap world by surprise. I’d heard Saafir was in rough shape, following a 2005 operation to remove a cancerous tumor from his spine, though the release of his unexpectedly religious album Good Game (ABB, ’06) seemed to signify a recovery. Yet a numbness that began in his toes in ’08 gradually crept up his legs to where he can no longer walk or even stand. His inability to work coupled with his medical expenses has wiped him out financially.

Tweeted by Questlove to his two million Twitter followers, Shock’s account went mini-viral over social media and hip-hop blogs. Wanting to interview Saafir, I called Shock, who gave his number but warned, “He’s a little heated ’cause I didn’t clear that story with him and I got some details wrong. But he wouldna let me post it. He’s a soldier.” And it takes some convincing before Saafir grudgingly agrees to an interview, though by the time we meet, his anger at the unwanted attention has largely dissipated into relief and acceptance. He’s allowed Chris Clay, a protégé of Shock’s who’s also a web designer, to set up a site, www.tostandagain.org, where fans can make Paypal donations. He’s even plugged the site in a phone interview on Sway and King Tech’s Wake Up Show (Shady 45 radio).

That the Wake Up Show was the first national music media to reach out to Saafir is unsurprising; the epic battle between Saafir of Hobo Junction and Casual of Hieroglyphics that the show hosted in 1994 when it was on KMEL was arguably step one in a series that leads to Sway interviewing Obama. A high-water mark of Bay Area rap history, Hobo v. Hiero occurred the same year Saafir released his debut, Boxcar Sessions, on Quincy Jones’s Warner imprint, Qwest. Saafir scored the $250,000 deal on the strength of his performances on Digital Underground’s Body-Hat Syndrome (TommyBoy, 1993) and in the film Menace II Society (1993), but even those didn’t quite prepare the world for his surrealistic syntax stretching on Boxcar or the tripped out beats of Hobo producers JZ and J.Groove.

While it became an enduring underground classic, Boxcar dropped at a time when the golden age was giving way to the bland consumer-speak that still dominates rap. After another album, The Hit List (1999), Saafir left Warner only to sign with Dr. Dre’s Aftermath as a member of Golden State Warriors, a supergroup with Xzibit and Ras Kass. But the project ultimately didn’t yield an album.

“We didn’t get held up by Aftermath; we had internal issues,” Saafir says. “We did a lot of high-profile records but we could never push past that level.” Following the group’s demise and his cancer operation, Saafir had just relaunched as an independent artist when he began to experience the first symptoms leading to his present condition.

The whole persona of a rapper is about being extraordinary, but in many ways Saafir’s current situation is typically American, Obamacare notwithstanding. Like any rapper who signs to a major in his 20s, he bought “some dumb shit” with his Warner money and has regrets, but he always set aside money from his deals; he has kids he’s putting through high school, among other expenses. But even with some insurance, he’s lost everything, and it’s impossible for him to make money the way a rapper does— always hopping flights to the next show — when it takes him two hours to get dressed.

After last year’s failed quest for laser surgery, described in Shock’s post, Saafir’s again working with his original doctor to determine the cause of his loss of leg function. If it can be restored, he estimates he’s looking at over $80,000 of uncovered expenses for surgery and rehab. If it can’t, he needs to get himself into an accessible assisted living situation, because couchsurfing in his condition is untenable.

But wheelchair or no, Saafir plans to continue rap.