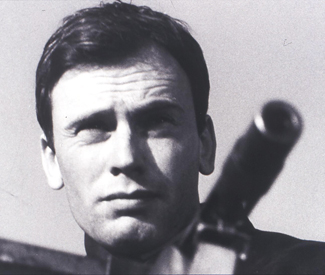 FILM Most observers of last week’s Oscar telecast assumed elegant 86-year-old Emmanuelle Riva was the star of the movie she’d gotten a Best Actress nomination for. Conspicuously absent — from that and most other awards events — was Amour‘s real performing lead, who’d gotten crowded out of the field by the usual surplus of major English-language roles for men. As the dignified elderly husband decreasingly able to care for a longtime spouse’s dignity-robbing failing health, Jean-Louis Trintignant grows more dominant in his character’s helplessness as Riva’s recedes into illness. It’s a powerful performance made all the more so by the simple shock of seeing him. Hasn’t he been, er, away a while? Or to put it bluntly: he’s still alive?!

The last time wide audiences would have seen him was in the large ensemble of Patrice Chéreau’s 1998 Those Who Love Me Can Take the Train. Already nearing 70 then, he remained somewhat active in theater while staying mostly off screen for the next 14 years. In honor of his return, the Pacific Film Archive is providing a retrospective that runs through April 21.

“And God Created Jean-Louis Trintignant” offers a mix of popular hits, agreed-upon masterpieces, and rarities that give fair measure of a long, prolific yet discriminating career. It’s surprising to see the wide range of films he’s played in, since Trintignant is so often the still center of them — he communicates such reserve, thoughtfulness, and economy of craft that it takes seeing numerous roles back-to-back like this to realize how very different his performances are. They’re just not flamboyantly different, in the way of a Daniel Day-Lewis or Meryl Streep. He’s said “The best actors in the world are those who feel the most and show the least,” a rule one could argue with — but it’s certainly true in his case.

Short, slight, handsome in a slightly nondescript way, he couldn’t have struck anyone at first as natural movie star material. But he did intrigue Roger Vadim, when the latter was looking for a newcomer to play off his female discovery in 1956’s …And God Created Woman. The woman was Brigitte Bardot, introduced completely nude (albeit laying on her stomach); it was Bardot and Vadim’s shared gift that though she spent the rest of the story clothed, one imagined with an indolent shrug those rags might tumble at any moment and she’d be starkers again. As the village lad who marries “that little slut” lest she be sent back to the orphanage (!), while she exerts a siren pull toward every other man around, Trintignant sounded a modest note in one of the most garishly silly yet influential films ever made. Yet the global sensation Bardot caused cast a public glare on anyone with a connection, let alone a purported inamorato. He voluntarily fled for military service.

When he returned — with rather less fanfare than Army-sprung Elvis — he set about building a serious actor’s resume with diverse projects and interesting directors. He was suddenly blond and uncharacteristically glamorous as a golden youth of Italy’s fascist elite in Valerio Zurlini’s Violent Summer (1959), so in love with an older woman (Eleanora Rossi Drago) they’re barely aware there’s a World War going on. But more typically he was creating anti-romantic characters typical of the 1960s — variably neurotic, eccentric, conflicted, always with more going on under the surface than one could fully grasp. One lesser-remembered PFA selection is Alain Cavalier’s 1962 New Wave triangle Le combat dans l’ile, in which his marital discord with Romy Schneider is eventually explained by his secretly belonging to a far-right terrorist cell.

Trintignant was in two of the most wildly popular “art” export hits of the decade, Claude Lelouch’s gauzy swoonfest A Man and a Woman (1966) and Costa Gavras’ political thriller Z (1969). Yet his race-car driver in the former tempers its Eurokitsch atmosphere with impenetrable cool, while in the hyperbolic latter he’s almost monastically austere as the investigator who patiently picks apart an assassination cover-up. Perhaps his ultimate role as a man of decisive inaction was as The Conformist (1970), again as a Mussolini-era fascist — one who betrays his friends as ruthlessly and usefully as director Bertolucci does the original Moravia novel. Amid that film’s ravishing baroque excesses, he’s as reptilian, quease-making, and pitiable as a Gollum, if better-dressed.

While he continued to make the odd all-star purely commercial project — a good one being rare 1973 American foray The Outside Man — he usually chose riskier fare. Thus he was the first major star to work with Eric Rohmer (as the Catholic fussbudget sorta-seeking romance in 1969’s My Night at Maud’s), and an early ally to figures as disparate as Jacques Demy, Claude Chabrol, Tinto Brass, Umberto Lenzi, Alain Robbe-Grillet, and André Téchiné.

Barely slowing despite the transition to character support, he’d found perhaps a definitive pre-Amour farewell role (and chronological end to the PFA series) as the retired judge busy bending laws for his personal amusement in Krzysztof Kieslowski’s Three Colors trilogy (and career) finale Red (1994). It might have served as a perfect capper — but you’ve got to hand it to any 83-year-old savvy enough to realize Michael Haneke was worth coming out of retirement for. *