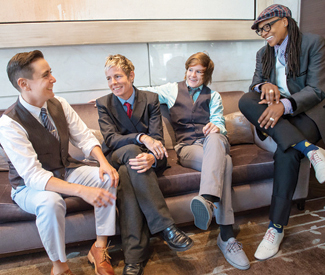 CAREERS AND ED When Ford Models announced that its newest menswear model was a woman — Olympic swimmer and New York artist Casey Legler — in the same month that Yves Saint Laurent chose Saskia de Brauw as the face of its spring-summer 2013 menswear collection, it became clear that men’s fashion was opening itself to the fact that not all people who wear suits and sport rugged looks are male-identified.

But not every butch looking for a fly three-piece has the gamine, broad-shouldered physique of Legler and de Brauw. What’s a dapper gent to do?

Enter the new wave of menswear (or, “masculine of center,” as we’ve seen the look defined on some style blogs) brands specifically tailored to the female-born or identified. Happily, downtown San Francisco’s Crocker Galleria will be the site of the first permanent menswear store to cater to the genderqueer.

“My mother started teaching me [to sew] when I was eight,” Tomboy Tailors’ 48-year-old, butch-identified owner Zel Anders writes me in an email interview. Anders has long been a fan of suits over dresses when it came to formal occasions, but was frustrated that she could never find a well-fitting outfit — even here in the Bay Area, where she’s lived since she was 17. She says the process of suit shopping grew painful, and found it necessary to steel herself before hitting the dressing rooms.

No such toughening up will be necessary at the new shop, which has already garnered a loyal Internet following despite the fact that it won’t open its doors until February 2nd. Tomboy Tailors’ staff will help customers find suits that fit right across the chest, hips, thighs, and seat, customizing them so that each garment fits its new owner.

The store will stock not only its in-house line (Anders especially touts its three-button, notch lapel suit for heavier clientele), but items from other brands selected for a pangender crowd — including a selection of men’s shoes in smaller sizes, like a Dalton wing-tip lace-up Oxford and saddle shoes from Carlos Santos and Walk-Over.

“I am having so much fun just watching people ponder and choose from the several hundred fabrics that they have as options,” Anders says about her Tomboy Tailors experience to date. ” Not only do they have to think about what color they want their suit to be, but they have to decide if they want a solid, herringbone, pinstripe, chalk stripe, plaid, or even a bird’s eye, nail’s head, or houndstooth check pattern to the fabric.” Finally, options.

Tomboy Tailors is hardly the only option for fly transpeople, dapper dames, and other genderqueers — transgressive men’s fashion site dapperQ (www.dapperq.com) recently published a list of fab online labels like Marimacho (www.marimachobk.com), The Original Tomboy (www.theoriginaltomboy.com), Saint Harridan (www.saintharridan.com), and Androgynous (www.androgynousfashion.com) that all have a mission to provide fashion for all points on the gender-fashion spectrum.