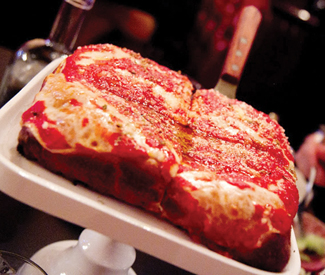 APPETITE Tony’s Pizza Napoletana reigns for my favorite all-around pizza experience, because of its range of impeccable pies, from New York to Neapolitan. I’m no stranger to these categories, especially after years of living in what’s become a damn great pizza town. As an 11-time world pizza champion, Tony Gemignani has done the impossible: win 2007’s World Champion Pizza Maker prize at Italy’s World Pizza Cup, the only American and non-Neapolitan to do so. What makes Tony’s special is painstaking detail to which each style is prepared, right down to flour and ovens used, whether authentic versions of Detroit pizza cooked in a 550 degree gas oven, or a Jersey tomato pie that could make one weep with its garlic and tomato purity.

Capo’s Prohibition-era setting (pressed tin ceiling included) is entirely my scene. From the doorman to a stylish host, it evokes a decades-old North Beach haunt, not a newcomer. Red leather booths named after Chicago mobsters, a functioning 1930’s telephone booth, a restored, 1960’s panoramic painting (found in the floor boards) of Adolf Restaurant once housed in the space… Capo’s is an ode to Chicago and San Francisco’s rich Italian-American immigrant history.

Sweet-spicy house Calabrese sausage ($18) in roasted peppers, caramelized onions, and light tomato cream sauce is dreamy. An antipasti platter ($12) feels sparse compared to antipasti “salads” of my New Jersey youth, dense with meat and cheese, but meats here are hand-sliced daily on an antique slicer in Capo’s front window. I rarely seeing Chicago specialties mostaccioli or conchiglie ($12 in pesto or tomato sauce, $13.50 in meat sauce) on West Coast menus; Tony’s mostaccioli is a beaut. Appropriately cheesy, baked in a wood-fired oven, red meat sauce seals the deal. Capo’s signature dish, quattro forni ($13), is limited to 20 a day due to the preparation required and well worth ordering. Like a glorified garlic bread, or as a waitress described it, doughnut, puffed bread is cooked four times in different ovens, doused in tomato sauce, mozzarella, garlic. If you have room and a warm whiskey crisp is available for dessert, get it.

Then there’s the pizza. While I’ve savored excellent thin crust in Chicago, even after multiple tries at original locations of legendary chains or solo favorites, I’ve yet to find deep dish remotely comparable to Capo’s or Bay Area deep dish havens, Zachary’s and Little Star. I won’t give up the hunt, but thus far for me eating deep dish here is better than going to Chicago (though I’d happily eat my way through Chicago any day).

Appropriate for a Chicago-influenced spot, there are four types of pies: deep dish, cast iron pan, stuffed, and cracker-thin ($17-35). You can’t go wrong. Meat blissfully dominates most pies (unless you build your own), whether folds of Italian beef, thinly shaved in authentic Chi-town fashion, or house Calabrese, fennel, or Italian sausages, shown off in the likes of the Sam Giancana or Old Chicago pies. Italian Stallion pizza, which I prefer in cracker-thin form, showcases Italian beef, heightened by a drizzle of horseradish cream and insanely good sweet-hot peppers you’ll find on a number of Capo’s pies. Flour-based crust gets texture and complexity from a dusting of cornmeal, while Tony reveals a key to its perfection: European butter and a bit of lard. Fresh cheese oozes, unlike chewy wads of low-quality mozzarella I’m faced with in some of Chicago’s venerable deep dish houses.

Elmer Mejicanos heads up a whiskey-centric bar program, housing over 100 American-dominant whiskies, while Tony mentions finding a few antique whiskey bottles dating back to the 1920s in the basement (when are we pouring?) Building your own Old Fashioned is a key menu focus, alongside a short-but-sweet cocktail list ($12). After trying every one on the menu, I’ve re-ordered only The Silencer. Carpano Antica takes the form of ice cubes melting in Campari, Seltzer Sister Soda and crystals of brandy — an ideally bitter, bright aperitif. A glass of Chianti or Montepulciano is well-suited to all that red sauce: Tony’s longtime business partner Marni McKirahan runs the wine program, also highlighting rare Midwest wineries.

If I seem to be gushing, perhaps I am. Visiting three times in the first month alone, I’ve sampled almost every listed pizza and cocktail. Some new openings are exciting, fresh, visionary. A spare few respect the past, even perfect it.