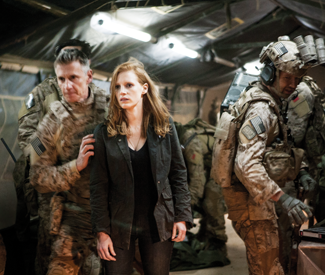 But even if Zero (more on that below) doesn’t claim cinema’s top prize, Bigelow will probably win another Best Directing Oscar before another woman anyway. She’s just about the only female director making films that work Oscar’s magic formula: critically praised, culturally significant, headline-grabbing, and popularly loved (with box-office hauls to match). Women may be making inroads on the screenwriting end of things (and you’ll find lauded female names among documentary, foreign-language, and film-producing credits), but the most successful post-millennial female directors — Sofia Coppola (a Best Original Screenplay winner for 2003’s Lost in Translation), Catherine Hardwicke, Andrea Arnold, Debra Granick, Lisa Cholodenko, Lynn Shelton, Kelly Reichardt, and Sarah Polley, to name a few — haven’t been able to tick enough of those golden boxes.

Whether or not a film wins an Oscar is hardly a measure of its true worth. But hoisting a Best Directing Oscar does count for something important, particularly in an industry that largely runs on male power. Bigelow’s success is particularly notable because she does not make so-called “women’s pictures,” whatever that may mean (she did make a vampire flick long before Hardwicke, though, as fans of 1987’s Near Dark will recall). With the exception of 2000’s little-seen The Weight of Water and 1989’s Blue Steel (would anyone remember that movie, if not for Derek Zoolander?) — with honorable mention for Angela Bassett’s formidable supporting turn in 1995’s Strange Days — Bigelow’s films tend to be, uh, “men’s pictures.”

The surfing, skydiving, bank-robbin’ three-punch of Point Break (1991) allowed Keanu Reeves to set a course for action-hero superstardom (without it, he’d never have been cast in 1994’s Speed); though the film features a traditional romantic subplot, it’s mostly about the bromance between Reeves’ undercover FBI agent and Patrick Swayze’s New Age macho man. K-19: The Widowmaker (2002) was Bigelow’s first foray into a military milieu; its tale of trouble aboard a Soviet nuclear submarine, circa 1961, was couched in a $100 million production that neither earned back its budget nor convinced anyone of Harrison Ford’s ability to do a Russian accent. (Interestingly, the film’s Rotten Tomatoes summary foreshadows the reception to date of Zero Dark Thirty: “A gripping drama even though the filmmakers have taken liberties with the facts.”)

Bigelow rebounded with The Hurt Locker (2008) — scooping up her accolades in front of ex-husband and former film-production partner James Cameron, whose 2008 Avatar grossed billions but didn’t win over Academy voters. Set during the Iraq War, The Hurt Locker follows the high-stakes, high-tension routine of a three-man bomb disposal team. It launched actor Jeremy Renner to stardom, and earned a screenwriting Oscar for Mark Boal, a journalist who’d been embedded with a US Army bomb squad. Along with the 2008 HBO mini-series Generation Kill (based on a book written by a journalist embedded with the Marines at almost the same time as Boal), The Hurt Locker — a tense, gritty thriller shot using hand-held cameras — was one of the first large-scale docu-dramas based on the months immediately following the 2003 invasion.

After the Oscars, rumor had it that Bigelow and Boal’s next film would be a South American “drug parable,” with big names like Tom Hanks and Johnny Depp floated as possible stars. Clearly, a more exciting project took precedence — one that’s already raked in critic’s association prizes, and raised the ire of government types, including Sen. Dianne Feinstein, who insist that it has “taken liberties with the facts.”

Front-loaded with equal parts acclaim and controversy, Zero Dark Thirty moves into wider release this week, and larger audiences will be able to make up their own minds about it. It’s certainly edgier than another 2012 film about CIA heroics. (There’s no waterboarding in Argo.) “What I want you to know is that Zero Dark Thirty is a dramatization, not a realistic portrayal of the facts,” CIA Acting Director Michael Morell explained in a recent statement, taking issue not just with the depiction of “enhanced interrogation techniques” (that’s “torture” to you and me), but also the way the film singles out one character as masterminding the operation to take down Osama bin Laden.

“The point was to immerse the audience in this landscape, not to pretend to debate policy,” Bigelow responded in an interview with entertainment site the Wrap. “Was it difficult to shoot? Yes. Do I wish [torture] was not part of that history? Yes, but it was.”

The extent to which torture was actually used in the hunt for bin Laden may never be known, though popular opinion will surely be shaped by this film, as it’s produced with the same kind of “realness” that made The Hurt Locker so potent. Zero Dark Thirty incorporates torture early in its chronology — which begins in 2003, after a brief opening that captures the terror of September 11, 2001 using only 911 phone calls — but the practice is discarded after 2008, a sea-change year marked by the sight of Obama on TV insisting that “America does not torture.” (The “any more” goes unspoken.)

Most of Zero Dark Thirty is set in Pakistan and/or “CIA black sites” in undisclosed locations; it’s a suspenseful procedural that manages to make well-documented events (the July 2005 London bombings; the September 2008 Islamabad Marriott Hotel bombing; the December 2009 bombing of Camp Chapman in Afghanistan) seem shocking and unexpected. Even the raid on bin Laden’s HQ is nail-bitingly intense. The film immerses the viewer in the clandestine world, tossing out abbreviations (“KSM” for al-Qaeda bigwig Khalid Sheikh Mohammed) and jargon (“tradecraft”) without pausing for a breath. It is thrilling, emotional, engrossing — the smartest, most tightly-constructed action film of the year.

At the center of it all: a character allegedly based on a real person whose actual identity is kept top-secret by necessity. She’s interpreted here in the form of a steely CIA operative named Maya, played to likely Oscar-winning perfection by Jessica Chastain. No matter the film’s divisive subject matter, there’s no denying that this is a powerful performance. Maya is the perfect Bigelow lead; she succeeds in a male-dominated world by focusing solely on her job and her ultimate goal, sexism and gender politics be damned. “Washington says she’s a killer,” a character remarks after meeting this seemingly delicate creature, and he’s proven right long before bin Laden goes down.

Some critics have argued that the character is underdeveloped, but anyone who says that isn’t watching closely enough. Maya may not be given a traditional back story (all we know is she was recruited into the agency after high school), or any outside life to speak of (even Renner’s unhinged Hurt Locker vet is shown going home to a wife and kid), or the desire to distract herself with romance (“I’m not the girl who fucks … it’s unbecoming” she explains at one point, dismissing a colleague’s inquiry into her social life). But there’s plenty of interior life there, and it comes through in quick, vulnerable flashes — leading up to the payoff of the film’s devastating final shot.