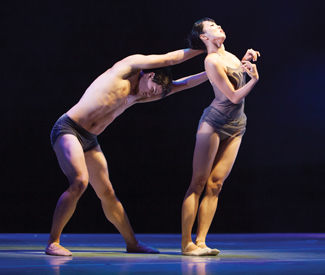 DANCE It doesn’t happen often, but when it does, it makes you wish that it could go on forever. Such was the case of a heartbreaking pas de deux toward the end of Alonzo King’s newest work, Constellation. Created by and for LINES Ballet’s senior ballerina Meredith Webster and Ricardo Zayas, and set to Handel’s plangent “Verdi prati,” the two dancers encircled each other, locked limbs, and pulled apart only to be drawn into each others’ spheres again. They struggled with each other and within themselves only to separate in the end. I kept thinking of Aristophanes’ definition of love as the attempt by the two halves of the original human, after having been split apart by a jealous God, to become one again.

Though this extraordinary duet was the high point of the evening-length work celebrating the company’s 30th anniversary, Constellation is a major achievement of King’s distinguished career of imaginative, thoughtful, and skilled dance making. The work abounds with mesmerizing small ensembles and rich imagery though the unisons for everyone are still problematic.

As is his want, King drew out of his dancers small-scale but resonating encounters that don’t necessarily add up — except in the way that a collector’s decisions impose coherence on treasures, whether they be Monets, pebbles, or martini shakers. Constellation, however, has more of a through line than I remember seeing in other King choreographies. Weaving through the piece was the figure of Webster, apparently on a search. She first appeared out of the dark, stepping through Jim Campbell’s curtain of light bulbs. Sitting on Ricardo Zayas’ foot, she valiantly tried to pull herself up on his leg; then, she broke up a duet between David Harvey and Michael Montgomery. In between she was carried and variously supported. Yet at the end, she was spent one, left on the floor. If Webster had a counterpart, it would be in the underused Keelan Whitmore, who often appeared an outside observer.

King plugged deeply into the individuality of these so different dancers who yet looked as if poured from one mold. The trio of Montgomery (who seems to have something of a comedian inside him), Zachary Tang, and Whitmore attacked a storm of staccato phrases as if they had hot coals under their feet. Though propelled by an impetus that seemed to suck Courtney Henry, Ashley Jackson, Yujin Kim, and Caroline Rocher upstage, their responses to the thrust could not have been more different.

In a hugely effective solo, Henry, dressed in a simple black leotard, stepped out of billowing fog (courtesy of lighting design Axel Morgenthaler), folding and stretching her limbs to the ends of the universe, until she gradually pulled the other dancers from the wings. In the many duets, the dancers seemed to morph into creatures sometimes outside themselves. At one point, I was pretty sure I had seen a multi-limbed something out of Hieronymus Bosch.

The first act ended with another stunner, a duet for LINES’ newest dancers, Kim and Tang. The exquisite Kim, long-limbed yet with a voracious appetite for space, slithered around Tang — muscular, yet highly expressive — and into his arms in what looked like a lover’s spat, perhaps inspired by Vivaldi’s “Sposa son disprezzata.”

Constellation is one of King’s most musically astute works. The collage of Baroque arias, Eastern chants, and original compositions worked exceptionally well. However, how Arvo Pärt’s over-exposed Für Alina made it into this distinguished selection remains something a puzzlement.

To have mezzo-soprano Maya Lahyani — in one of Colleen Quen’s theatrical concoctions and accompanied by her sensitive pianist Hadley McCarroll — perform was a special gift not just for the audience but also for the dancers, who responded with such hunger to the live music.

Constellation was inspired by Jim Campbell’s light sculpture Exploded Views, in which hundreds of flickering LED lights create a sense of stasis as well as life. Fascinating, it looked like television snow being animated by moving silhouettes. Unfortunately, Campbell’s translation of the concept to the stage didn’t quite work: black shapes, perhaps fluttering birds, behind the light curtain; rolling lit balls; light boards; and Wheelan wrapped in Joseph’s dreamcoat (of light bulbs). *