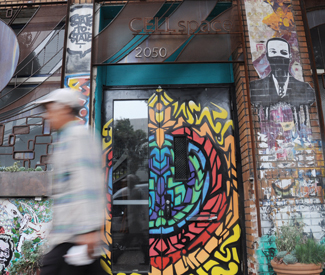 
For the last 17 years, CELLspace has been a hub for unique cultural, artistic, and community events in the heart of the Mission. The bad news is that CELLspace is losing its lease, but the good news is it’s being taken over by creative, resourceful people from its community who plan maintain and expand its mission.


In the process, CELLspace is undergoing a renovation and, beginning in early December, getting a new name: Inner Mission.


"We’re calling it an evolution, and we’re trying to hold to that because the CELLspace has an important history and community," says Eric Reid, one of the four new owners. "We’re drawing from a well that we didn’t dig, so we’re trying to keep the neighborhood involved."


So Inner Mission will continue to offer community-based classes such as tango, Aztec dance, and yoga; and evening gatherings by community groups. But along with its recently upgraded sound and lighting systems and well-done new bar, Inner Mission will draw from the creative projects of its new owners and become a nightclub available to host events by outside promoters.


"We want to be a constantly throbbing venue as far as the art is concerned, a place for people to explore their creativity," Gaines told us. "We’ve always had the intention of opening up a venue for ourselves, and we want to really accommodate the community as well."


They plan to activate the space for longer hours, including more active curation of the art gallery space in the front of the venue and adding a daytime smoothie and kombucha bar, while also making the overall venue a better nightclub with more regular events — including experimental dinner theater that Reid is excited about producing — rather than the isolated special events that CELLspace has generally done.


While Inner Mission won’t have the nonprofit designation that CELLspace does, the new owners have incorporated as a Certified B Corporation, or Benefit Corporation, a new designation that carries the expectation of greater environmental sustainability, stronger worker protections, and returning more profits and benefits to the community.


"We are going to be the first B Corporation nightclub in the country," Reid said. "We think this is the way things are going."


Gaines also cited the work that Carson does with Sustainable Living Road Show — entertainers and educators in an "old timey carnival road show" that tour in renewable fuel vehicles to teach sustainability — as a key part of their new ethos.


The stated mission of CELLspace is "to provide a safe and supportive public environment for the exploration of art, education, performance and community building. Through cooperative relationships, CELLspace encourages the celebration of intergenerational, cross-cultural collaborations and the promotion of social justice."


Reid and Gaines say they are committed to that same mission even as they seek to make the space more vibrant and accessible, and with a greater focus on the emerging new global consciousness.
Sup. David Campos, who represents the Mission, said CELLspace is an important community institution and he’s happy to hear the new owners plan to continue its current programming. "It sounds like it’s a positive thing, we’ll reach out to them and get more specifics and see how we can work with them."