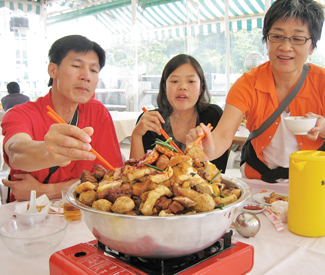 FEAST “Comfort food for the working man,” is how longtime Sunset Magazine food writer and Hakka Chinese daughter Linda Lau Anusasananan describes the food she grew up watching her grandmother prepare. Anusasananan spent years penning articles on everyone else’s soul foods in her professional career, and finally decided that the earthy — yet at times incredibly complex — eats that have been developed by the diaspora sprung from her nomadic ancestors deserved a cookbook of their own.

She traveled to Hakka hotspots in China, Malaysia, Toronto, Peru, and the Richmond District to explore the various permutations of the plates (and basins) of her ancestors. The result is her appropriately-titled The Hakka Cookbook (University of California Press, $39.95, 293pp), and a long overdue collection of the unique cuisine with hale roots in country eating. We caught up with her via email to learn more about the roots of Hakka cooking, and the path that led Anusasananan — who makes an appearance this week at Omnivore Books — to her most personal project to date.

SFBG: In the book, there’s an incredibly elaborate recipe for a Hakka basin feast. Where did the basin feast originate?

LLA: There are several stories about how this dish was invented. Basically it is a multi-course banquet layered in a metal wash basin. Diners gather around the big pan and eat their way from top to bottom. This dish is popular in the New Territories of Hong Kong. One story is that when Emperor Bing of Song moved south during the Mongolian invasion, there weren’t enough dishes to hold food for his entire entourage. Inventive villagers filled their wash basins with the army’s banquet. Another story is that when the Qianlong emperor visited Guangdong, he liked to eat the villagers’ banquet leftovers.

SFBG: Where do you go for decent Hakka food in the Bay?

LLA: There are two SF Hakka restaurants mentioned in the book, Ton Kiang (5821 Geary, SF. (415) 387-8273, www.tonkiang.net) and Hakka Restaurant (4401 Cabrillo, SF. (415) 876-6898, www.hakkarestaurantsanfrancisco.com). Both menus also include other types of Chinese cuisine, and the owners of both are Hakka. At the Hakka Restaurant I love chef Jin Hua Li’s Chinese bacon with preserved greens and the chicken with preserved Greens. I also love the Chinese broccoli with rice wine. At Ton Kiang, they serve a fine salt-steamed chicken, it is moist and smooth.

SFBG: What characteristics of the Hakka people are reflected in their food?

SFBG: What are the most emblematic ingredients in Hakka food?

SFBG: What led you to write The Hakka Cookbook?

LLA: To discover my own Hakka identity through what I know best, food. When I was a child, my grandmother, who we called Popo, always told us, “you should be proud you are Hakka.” She would give us Chinese lessons, and sometimes cooks us dinners. Growing up in a small town where we were the only Chinese, we weren’t interested in learning how to be more unique. We just wanted to fit in. So much of her Chinese lessons were lost on us. Decades later, her words haunted me and I decided to research the meaning of those words after I left Sunset Magazine.

SFBG: In your previous food writing career, how did it feel to have limited access to writing about the food you grew up with?

LLA: In the 1970s and ’80s, we were allowed great freedom to explore. In fact, Sunset Magazine sent me on my first trip to China in 1987 to write about the food there. China had just opened up. A photographer and I spent two weeks scouting the food scene and came back with one of the first stories written about home cooking in China.

I wrote about all kinds of food. When I wrote about ethnic food I had to keep in mind that I was writing for a Western audience. So I would choose dishes and ingredients that might appeal to more mainstream tastes. As advertising and issues shrank, it was more difficult to write about ethnic foods because there were far fewer pages. Those few pages needed to appeal to the largest audience. That’s the reality of publishing.

This book is my own personal journey to write what I wanted. It is not a mainstream subject, so it took me a long time to find a publisher. But I feel, it is waste of time to write a book chasing a trend, you should write about what you think is important. Then hope enough people will also be interested enough to read it.