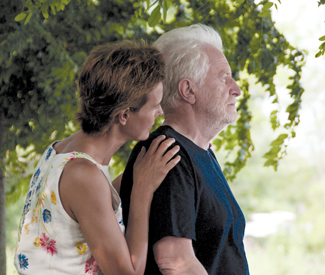 FILM The distinguishing characteristic of André Téchiné’s movies is the speed and force with which life changes people and their relationships with one another, even as the director’s presentation is so matter-of-fact that no single moment betrays the enormity of changes endured. He’s put out a film every year or two since the mid-1970s, and like a prolific, reliable literary novelist, his efforts are always admirably crafted even when they’re not particularly inspired. When they are inspired, as in Wild Reeds (1994) or My Favorite Season (1993), they’re superb — yet not all that different from the rest, just a bit better.

His latest, Unforgivable, is only quite good, but then one might as well be grateful he’s still this interested and deft at age 69. Francis (the estimable André Dussollier) is the French author of best-selling crime novels who’s decided to recharge his batteries by living in Venice for a year. He’s struck by the brisk attractiveness of Judith (Carole Bouquet), the estate agent he consults to find a rental; she finds his brazen come-on more annoying than amusing, let alone tempting.

Yet 18 months later they’re contentedly married, and hosting two daughters of his by a prior marriage. The eldest, Alice (Mélanie Thierry), clearly takes her mother’s side in a lingering grudge match she’s doing her best to keep alive; when she disappears, probably with a ne’er-do-well local aristocratic boyfriend, there is puzzlement but also a certain relief. That turns to real worry for Francis, however, as days go by and no one at all seems to know Alice’s whereabouts — not even the husband she’s possibly abandoned. Has she eloped with her lover? Or drowned, having last been seen swimming?

Advised on all sides to relax and wait for her to turn up, Francis instead hires a private detective in the form of Anna Maria (Adriana Asti), who was once ex-model Judith’s paramour and, like Francis, has a problem child in the recently prison-sprung, extremely prickly-tempered Jérémie (Mauro Conte). The paternal quest that’s become an obsession oddly fosters a bond between Francis and this mercurial delinquent, even as it erodes the happiness he’s won in autumnal life with Judith.

Unforgivable is based on a novel by Philippe Djian, but feels very much of a piece with films whose stories Téchiné originated with or without collaborators. It hurtles forward with a casual intensity that’s uniquely his own, sometimes surprising or even shocking us, but never inflating incidents to the point of melodrama. It offers a morally complex universe without judgment — Téchiné may be a gay filmmaker, but it’s typical of his unpredictability that the most horrific action here is taken by two minor characters as payback for a homophobic incident. Unforgivable isn’t among the director’s most memorable creations, but particularly in the midst of the usual summertime pap, it’s satisfying to spend two hours with someone who thinks like an adult, and treats the audience as one.