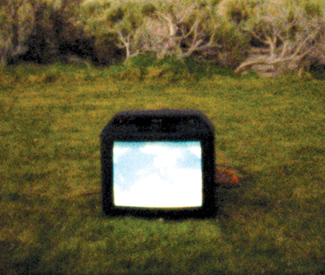 The festival’s only solo program, besides a tribute to Canyon Cinema co-founder Chick Strand (her 1979 film Soft Fiction is rarely screened and highly recommended), belongs to Laida Lertxundi. A former CalArts student with a sure handle on 16mm as a philosophical instrument, Lertxundi was recently featured in the Whitney Biennial. Where Strand made some of her most beautiful work far from Southern California, Bilbao-born Lertxundi brings an outsider’s eye and sharply turned cadence to the shifting landscape of Los Angeles: one has the sense of desert reclaiming city watching her short films.

A Lax Riddle Unit (2011) opens on the curled lip of James Carr’s soul number “Love Attack” and a cragged landscape view. The long take floods with softening light, but then a terrifically decisive cut deposits us in the flat light of an apartment. The sudden switch bears the imprint of both insight and displacement. Leafy potted plants reach for the natural light framed in a window, and Carr’s wail gives way to Robert Wyatt’s impressionism: a different emotional architecture entirely. The camera turns slow pirouettes through the apartment, passing over an amplifier (always this confusion about the relationship between sight and sound), a woman kneeling to play a keyboard, some records, and then catching up with her again sprawled in bed.

As is often the case in Lertxundi’s films, the composition does not settle on the human form in the usual way. The residue of the apartment, oddly reminiscent of Jean-Luc Godard’s Contempt (1963), develops until a few shots later we end with a bleeding red dusk spreading across Los Angeles — an image pitched on the edge of surrender.

My Tears are Dry (2009) is even more minimalist in its riddling structure. Lertxundi cuts between an image of a woman’s torso on a bed, playing and rewinding the same snip of Hoagy Lands’ title ballad, and another woman sitting on a couch strumming a dissonant chord. Out of this frustrated syntax comes blessed continuity. The song breaks through and sets in motion a weightless daydream borrowed from Bruce Baillie’s 1966 single-shot film, All My Life (included on the same program along with other antecedents by Hollis Frampton and Morgan Fisher): in place of his horizontal pan across flowers, Lertxundi tilts her camera up past palms towards the same pale blue sky. Poignant without object, the film delivers a gentle spiritual plea for persistence.

Several other “Crossroads” films successfully hone in on resonances specific to film stock. Curious Light (2011), Charlotte Pryce’s hand-processed illumination of Lewis Carroll’s Alice in Wonderland, provides a tactile 16mm equivalent to the absorption of reading. Scott Stark’s brilliant collage, One Way to Find Out (2012), stretches Hollywood ‘Scope images of desire like so much taffy. Rei Hayama’s A Child Burying Dead Insects (2009) decelerates a short fragment of film (a girl jogs into a leafy frame, tosses up a ball, kneels for the burial, and exits the frame) until the film itself begins to rebel in the frame. The Lumière-like simplicity of the action and swirling soundtrack music opens up a spry meditation on film’s still-startling capacity for reincarnation.

Ben Russell foregoes his “Trypps” film-series tag for River Rites (2011), but the concept of a single-roll invocation of ritual and trance remains. Curving cultural anthropology into the experience of time, Russell generates ontological fireworks and in situ reflection on filming other people. Ben Rivers builds on the fictive anthropology mode last seen in I Know Where I’m Going (2009) for his ambitious Slow Action (2010). His camera picks over “the ruins of ruins” of four island sites elaborated by voiceover narration (written by novelist and critic Mark von Schlegell) rich in invented ethnographic detail and philosophical speculation as to the true nature of utopia. The two Bens have collaborated on the forthcoming A Spell to Ward off Darkness, a film shot in Norway starring the musician Rob Lowe. Fingers crossed it’s ready for the next “Crossroads.” *