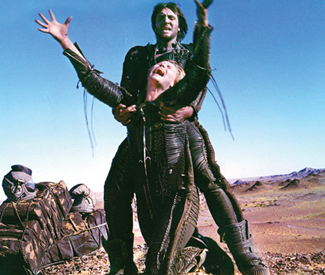 FILM To the extent he’s known at all, Polish director Andrzej Zulawski is known in the U.S. for the only movie of his that’s gotten any real exposure here: Possession, a scandalous 1981 Cannes prize-winner considered to have some commercial potential due to its “horror” elements, including a creature designed by FX master Carlo Rambaldi. Its American distributor cut the film from 127 to 80 minutes, radical surgery turning an already logic-defying narrative into a complete madhouse abstraction with its own considerable charms — though don’t tell that to Zulawski, who hated the truncated results.

Thrown into 1983 grindhouse bills, this version flummoxed mainstream horror fans (too arty) and critics (too distasteful), but earned a cult following eventually surprised to learn there was a very different, longer, at-least somewhat-coherent Possession also in existence. One making it clear that for all its bloody, fantastical, even mystical flights, this movie was what Zulawski claimed all along: a portrait of a marriage in painful dissolution, with Isabelle Adjani and Sam Neill standing in for the director and his first wife (Polish actress Malgorzata Braunek). Even if dramatizing that relationship’s collapse somehow required such metaphorical leaps as Adjani keeping dismembered body parts in her refrigerator and being fucked (happily!) by a tentacled slime monster.

Repaying endless viewings (bonus: after a few you can actually decipher Adjani’s impenetrably accented English), brilliantly acted, and oddly touching despite its myriad outrages, Possession is like nothing else — except, that is, the director’s other films. Five will be shown in the Yerba Buena Center for the Arts series “From A Whisper to a Scream: Discovering Andrzej Zulawski” this week and next. Watching more than one in close proximity may be hazardous to your mental health, but what the hell.

Now apparently retired at 71, Zulawski was born in Lvov, educated all over Europe thanks to his intellectual family’s diplomatic ties, and assisted Andrzej Wajda on several 1960s films. His first feature, The Third Part of the Night (1971), set the precedent: it was as fevered as its hero, already fragile when the senseless murder of his wife (Braunek) and child by Nazi occupiers turns him into a dervish of frantic motion and impulse. Is he mad? Hallucinating? Already dead? “You behave like the wind,” a friend tells him, a judgment applicable to almost any Zulawski feature or character. This debut won acclaim, but was warily viewed by the Polish government. His next, 1972’s The Devil, an even more berserk Pilgrim’s Progress through war-torn 18th century Poland, was banned outright.

Zulawski responded by moving to France, where 1975’s The Most Important Thing: Love, a heated cry against (and of) present-day orgiastic perversity — “Force yourself to look at what revolts you the most,” as one participant puts it — was a success. As a result, Polish authorities invited him back to adapt a great-uncle’s literary sci-fi epic. An allegorical tale of Earth’s civilization grotesquely recreated on another planet, On the Silver Globe was two years into production and 80 percent shot in 1977 when the same authorities shut it down, destroying sets and costumes for good measure. A decade later, Zulawski turned the striking extant footage into both a semi-realized spectacular and a chronicle of its own undoing — 166 minutes’ auto archaeology.

These films are screening at YBCA, though unfortunately the director’s eight French ventures (apart from French-German co-production Possession, showing in an uncut, new 35mm print) were unavailable for inclusion. Most starring subsequent on and off-screen partner Sophie Marceau, they range from 1985’s astonishing Parisian-gangster Dostoyevsky update L’amour Braque to the overblown soap operatics of 2000’s Fidelity, his last work to date.

A sole later Polish endeavor completes YBCA’s quintet. Szamanka‘s sheer extremity — of cinematic and performance frenzy, of often literal wrestling with sex, violence, religion, philosophy, and politics — crystallizes the best, worst, and most purely Zulawskienne (an actual French coinage meaning “over the top”) of this singular career. An older anthropology prof (Bouguslaw Linda) and gorgeous, unlikely engineering student (Iwona Petry) fuck, fuck, fuck around Warsaw, as compulsively and destructively as the duo in 1976’s In the Realm of the Senses, with an endpoint anticipating Hannibal’s cannibal-licious last supper.

Reviled in Poland, barely glimpsed elsewhere, the 1996 film was notorious before it was finished, with Zulawski accused of wildly mistreating 20-year-old “discovery” Petry. She refused to comment, but immediately abandoned acting and reportedly sought spiritual succor in India. Even the sturdier Adjani said it took her years to get over making Possession. What to say about a director who drives actors over the brink? Only that the emotions — as is sometimes said of the millions spent on lavish productions — are all right up there on screen.

“FROM A WHISPER TO A SCREAM: DISCOVERING ANDRZEJ ZULAWSKI”