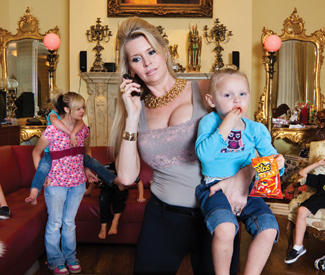 SFIFF It’s possible to have an almost perfect Sundance Film Festival viewing experience if you hew to one simple rule: only go to the documentaries. Sure, see some of the dramatic entries too, after the 40th person has told you such-and-such title is great. But you can rarely go far wrong with the documentaries. Sundance has its pick of the annual crème de la crème in that genre (among U.S. if not necessarily international films).

As pretty much a “best of other festivals” festival taking place in late spring — thus perfectly situated to grab the best docs not just from Sundance, but also Berlin, Rotterdam, South by Southwest and elsewhere — the San Francisco International Film Festival can potentially offer the crème de la crème de la crème. Thank god documentaries, unlike that imaginary dairy substance, are not high in saturated fat or cholesterol. You can consume them for SFIFF’s entire span and remain your slim, lovely self, mentally refreshed by enormous quantities of new information ingested the fun and easy way.

Actually, a portrait of conspicuous consumption in its most corpulent form was among Sundance’s opening night films this January, and will duly boggle your mind at SFIFF. Lauren Greenfield’s obscenely entertaining The Queen of Versailles takes a long, turbulent look at the lifestyles lived by David and Jackie Siegel. He is the 70-something undisputed king of timeshares; she is his 40-something (third) wife, a former beauty queen with the requisite blonde locks and major rack, both probably not entirely Mother Nature-made. He’s so compulsive that he’s never saved, instead plowing every buck back into the business.

When the recession hits, that means this billionaire is — in ready-cash as opposed to paper terms — suddenly sorta kinda broke, just as an enormous Las Vegas project is opening and the family’s stupefyingly large new “home” (yep, modeled after Versailles) is mid-construction. Plugs must be pulled, corners cut. Never having had to, the Siegels discover (once most of the servants have been let go) they have no idea how to run a household. Worse, they discover that in adversity they have a very hard time pulling together — in particular, David is revealed as a remote, cold, obsessively all-business person who has no use for getting or giving “emotional support;” not even for being a husband or father, much.

What ultimately makes Queen poignantly more than a reality-TV style peek at the garishly wealthy is that Jackie, despite her incredibly vulgar veneer (she’s like a Jennifer Coolidge character, forever squeezed into loud animal prints), is at heart just a nice girl from hicksville who really, really wants to make this family work.

Other docs pipelined from Sundance to SF include acclaimed ones about dissident Chinese artist Ai Weiwei (Ai Weiwei: Never Sorry), Ethel (as in Kennedy), pervasive rape in the U.S. military (The Invisible War), and the Israeli military legal system that governs civilian Palestinians under occupation (The Law in These Parts). Of particular local interest is David France’s excellent How to Survive a Plague, about how ACT UP virtually forced the medical and pharmacological establishments into speeded-up drug trials and development that drastically reduced the AIDS epidemic’s U.S. fatalities within a decade. Don’t expect much about SF activism, though — like so many gay docs on national issues, this one barely sets foot outside Manhattan.

Of actual local origin are several SFIFF nonfiction highlights, not least festival closing nighter Don’t Stop Believin’: Everyman’s Journey, Ramona Diaz’s film about the incredible journey of Filipino superfan Arnel Pineda, from fronting a Journey cover band to fronting the actual Bay Area outfit itself as its latest lead vocalist. There’s also Micha X. Peled’s last globalization trilogy entry Bitter Seeds, focusing on hitherto self-sufficient farmers in India increasingly driven toward bankrupting debt (and widespread suicides) by costly biotech “advances;” Peter Nicks’ The Waiting Room, which sits us right there at Highland Hospital in Oakland, illustrating the heroically coping status quo and desperate need for improvement in a microcosm of U.S. healthcare; and Jamie Meltzer’s world premiere Informant. The latter’s subject is activist-turned-FBI snitch Brandon Darby, whose testimony got two anarchists imprisoned — and who fully participated in this portrait, even its re-enactments of his protest-group infiltration. Darby is expected to attend the festival; given this town’s political leanings, he might want to wear a raincoat.

Speaking of audiences hurling things — abuse, at the least — Caveh Zahedi (plus his lawyer) was evidently met with a shitstorm after the SXSW premiere of The Sheik and I. You, too, may feel the spasmodic urge to throttle him during this latest naughty-boy’s own adventure, in which he accepts a commission to make work for a biennial perversely themed around “art as subversive act” in the far-from-liberal United Arab Emirates. Professed fans, the curators had duly seen his prior work; surely they knew they were inviting trouble in these circumstances?

Nonetheless, they play perfectly into his hands, expressing dismay and barely masked fear as Zahedi faux-naively proceeds to do everything he shouldn’t. That includes ridiculing Islam and the host sheik, stereotyping Arabs in general, putting everyone (including himself and his two-year-old son) in potential danger, all the while claiming his aim is “a critique of imperialism.” Is he really the very model of the privileged Western artist, railing about artistic freedom while ignorant that sometimes, some places, some things (like blasphemy, and prison) must take precedent? Or is the whole act just a deliberate provocation (hardly his first), albeit one with disturbingly dire potential consequences? Alternately very funny and completely infuriating, The Sheik and I is one movie you might want to attend just for the Q&A afterward. Odds are, it’s gonna get ugly.