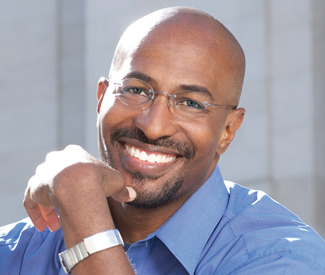 THE GREEN ISSUE No one can accuse Van Jones of being a one trick pony. In the early days of his activist career he monitored police violence in the Bay Area, and from there gradually widened the frame of his activist efforts. Jones formed the Ella Baker Center for Human Rights in Oakland in 1996, then became a green jobs pioneer, promoting environmentally-friendly work in low income communities — a revolutionary tactic that eventually landed him a short-lived adviser position within President Obama’s Council on Environmental Quality.

In his new book Rebuild the Dream (Nation Books, 278pp, $25.99) Jones has expanded his talking points to include the ways in which the financial sector has let us down, how Obama only did what we forced him to do (we gotta yell louder, Jones says), and how we can help fix the economy by focusing on “collaborative consumption.” Call it holistic activism. He’s launched a national junket to talk Rebuild that will bring him to the Commonwealth Club on April 16.

It is perhaps this kind of nuanced approach that scared the bejeezus out of the conservative demagogues whose smear campaign convinced Jones to resign from his White House post in 2009. Leave it to Glenn Beck to shame someone for saying he wanted “a whole new system” (as Jones proclaimed in a speech at a youth climate change conference.) The conservative media accused Jones of a communist past — which was accurate enough — and of signing a 9/11 truther petition that said that George Bush had prior knowledge of the World Trade Center attacks. He was innocent of this last point, the organization in question admitted months later, to a deafening media silence.

But Jones hasn’t retracted his call for a new system. In fact, in the pages of Rebuild the Dream he seems to step into a post-resignation hybrid role, in which he is no longer an outsider activist, but still has no formal role in Washington, D.C. Accordingly, he seems less fired up by the actions of national politicians as the agenda-pushing energy of the Tea Party and Occupy movements, which his new book spends entire chapters analyzing and critiquing. Even certain innovative businesses get a shout-out.

“You have Kiva, Kickstarter, Airbnb, and Zip Car already beginning to point to a future economy where more people are sharing fewer things,” Jones told the Guardian in a phone interview last week. “That’s good for people and the planet. You are also are saving money and you’re relying on people and relationships rather than dollars, you’re refinancing your social capital.”

He calls this economic ethos “collaborative consumption,” and it’s a heady idea for proponents of self-sustaining communities. Building a new economy on this business model, however, will take some tweaking that’s not covered in Rebuild — the city-level debate on whether SF Airbnb users should be subject to the city’s 14 percent hotel tax is one current-day example of how things can get complicated.

Rebuild offers a fairly honest critique of Obama’s successes and failures during the president’s first year in office. Nonetheless, the timing of the book, with it’s underlying message that we need to stay engaged in the political system to achieve real change, seems somewhat cagily timed. Is Rebuild the Dream part of Obama’s re-election campaign?

“The answer is no,” Jones is quick to reply. “We’re a non-partisan organization, we don’t endorse political candidates.”

But the election year publication is no coincidence: he wants all candidates to start talking about fixing the institutional reasons behind inequality.

“The two factors once used to pull people out of poverty were home ownership and education,” he says. “Those have now become the two factors by which people are being pulled into poverty because of the underwater mortgage problem and the fact that kids are coming away from college with massive debt and no ability to get a job. We think that these are issues that the politicians need to be forced to respond to and rethink.”