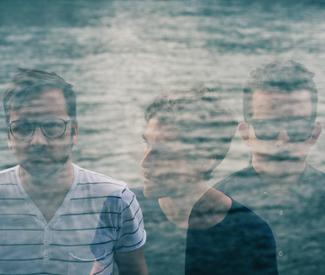 MUSIC “I get frustrated when things are repeating in life,” says Jon Philpot of Brooklyn trio Bear In Heaven. “I feel like I’m always trying to find ways to push people into doing things that maybe they don’t feel comfortable with or haven’t done before.”

Phlipot’s penchant for pushing boundaries is likely why each release from these experimental indie rockers is a metamorphosis from one sound to the next. For its third full-length, I Love You, It’s Cool, out yesterday on Dead Oceans/Hometapes, Bear In Heaven embraced a pop sensibility that transformed its inventive layering of swirling, cosmic textures into its most approachable work thus far.

“I wanted to make a dance record, that’s for damn sure,” Philpot explains. “We didn’t make a dance record, so we ended up with a record that’s somewhere in between [that] and what we are.” Philpot’s catchy vocal melodies lend an element of familiarity to the epic arrangements of pulsing, otherworldly synthesizers, distorted guitars, and dizzying percussion on I Love You, It’s Cool.

It’s a far cry from the bizarre, down-tempo dissonance of 2007’s abstract debut Red Bloom of the Boom, but the transition is apparent on its sophomore effort, Beast Rest Forth Mouth, which looked toward a new pop sound while one foot remained firmly planted in droning, avant-garde territory.

A surprisingly warm reception to the second album culminated in a year and a half of extensive touring, which also helped shape the band’s current aesthetic. “We used to be like — we didn’t want the audience to enjoy themselves,” says Philpot. “Like, ‘You’re gonna come to our show? Alright, prepare. We’re gonna shred your ears open.’ [Now] we’re into it. When the crowd’s into it, it’s nice.”

In making I Love You, It’s Cool, Bear In Heaven was unfazed by the weighty expectations that came with Beast Rest Forth Mouth‘s success. “We sort of closed our eyes and ears to all that noise and just made a record that we felt good about,” he says. “We wouldn’t do that kind of thing, try and make something that doesn’t feel natural. There’s not enough incentive in it for us to do that. This is what we are, this is what we’ve done, this is what we’re gonna continue to do. If you like that, welcome aboard.”

On board with these straight-shooters is a curious number of fellow musicians. “I don’t know why that is, but musicians love us,” he remarks when I mention spotting drummer David Prowse of Canadian rock duo Japandroids in a Bear In Heaven t-shirt. “I guess we’re pretty fun to hang out with, that’s one thing. We’re getting a steady normal people fanbase, too.”

Fans recently got a taste of the new tracks at South By Southwest in Austin, TX. “I was nervous,” Philpot admits. “There was a lot to figure out still. At each [show], we fucked up at least once during a song, but I think all in all it was really good. There were a lot of people there.” Philpot also tells me he’s building a light show the band can manipulate from on stage, sounding a little uneasy when he says, “It could be chaos.”

In the kaleidoscopic video for the album’s charming lead single, “The Reflection of You,” cameras zoom in and out on Philpot, guitarist Adam Wills, and drummer Joe Stickney at a rapid pace as strobe lights flash beneath them. It’s a hyper-stimulating, entirely accurate depiction of the band’s sound; once the rollercoaster ride is over, you can think of nothing but jumping back in line and doing it all over again.