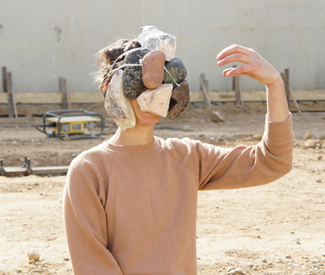 VISUAL ART Now in its 10th year, Art Basel Miami Beach (ABMB)— the art world’s annual “spring beak” during which power brokers, status-seekers, and a curious public descend on Miami Beach over the first weekend in December — makes for an easy target, engorging South Beach’s already cartoonish version of “living large” by bringing its own cold strains of entitlement, status, and exclusivity.

Perhaps this is what advertising mogul and mega-collector Charles Saatchi decried (somewhat sanctimoniously) as “the hideousness of the art world” in an op-ed piece for the UK Guardian, conveniently published during the fair’s run. Those who liked to show off certainly did: luxury SUVs continually clogged the viaducts across Biscayne Bay; I counted more blue-chip handbags and heels than in the September issue of Vogue; and there was always buzz of a party or dinner you weren’t on the list for. (Party-crashing is ABMB’s unofficial blood sport).

“I just stopped Tweeting,” remarked a social media manager for a San Francisco museum, as we shared a bleary-eyed ride to the airport on Monday night. “I mean, how many jokes can you make about the money?”

My van-mate’s fatigue was understandable. The fair itself is exhausting, having grown to include some 260 international exhibitors that transform the Miami Beach Convention Center into a warren of aisles and booths, as well as programs of outdoor sculpture, video, and a series of panel discussions and Q&As. And this isn’t even including the aforementioned endless circuit of afterhours soirées.

But his bafflement also pointed towards the way business is done at Art Basel, bringing to mind Marx’s characterization of capital as a kind of magic act. Most of the transactions happened offstage, with a majority of pieces selling before the fair had even opened. As a curator friend jokingly asked, echoing sentiments she has been hearing all weekend from gallery associates: “Where’s the recession?”

There certainly wasn’t much in the way of finger-pointing on the convention center floor. Threats of an Occupy-style protest remained just that. Danish collective Superflex’s giant flags emblazoned with logos of bankrupt banks (at Peter Blum Gallery) attempted to reveal the elephant in the room. They might have been overpowered, however, by the flash of Barbara Kruger’s riotous wall texts at Mary Boone, which proclaimed “Money makes money” and “Plenty should be enough.” The ripest visual metaphor for wasteful abundance was certainly Paulo Nazareth’s “Banana Market/Art Market,” a green Volkswagen van filled with real bananas that spilled out onto the convention floor.

Even though the writing was on the wall, visitors seemed more keen on getting their pictures taken with some of the single-artist installations that were part of the”Ark Kabinett” program. Ai Weiwei’s barren tree made from pieces of dead tree trunks collected in Southern China had almost as long of a queue as Elmgreen and Dragset’s marble sculpture of a neoclassical male nude hooked up to an IV, the centerpiece of Amigos, the un-ambiguously gay duo’s deconstructed bathhouse that took over Galeria Helga de Alvear’s booths.

There were a few welcome surprises: new LA-based artist Melodie Mousset’s mixed-media piece “On Stoning and Unstoning” (at Vielmetter) offered a politically astute and formally bold tonic to the generally conservative, painting-heavy selection, as did older sexually and politically frank pieces by second-wave feminist artists such as Martha Rosler and Joan Semmel.

However, the most exciting art could be found outside the convention center, mainly in the rapidly-gentrifying Wynwood neighborhood which now boasts more than 40 galleries (nearly quadruple the number from eight years ago). Many of Miami’s biggest collectors have followed suit, setting up warehouses in the adjacent Design District where their collections are on view to the public.

“Frames and Documents,” the Ella Fontanalas-Cisneros Collection’s sensitively curated selection of Conceptualist art from the 1960s to the late ’80s— which juxtaposed the work of Central and South American artists with that of their American and European contemporaries — was brimful with lush aesthetic rewards delivered with the barest of means.

I renewed too many loves that afternoon (and found some new ones, as well) to list in full, but another institutional stand-out was the Miami Art Museum’s “American People, Black Light,” a retrospective of Faith Ringgold’s early paintings from the ’60s that capture with unflinching clarity the anguish, ambivalence and rage of the Civil Rights era. Given Ringgold’s profile, it’s shocking that they’ve never been the subject of their own exhibition until now.

Much has been made of the “trickle down” effect ABMB has had on the cultural revitalization of Miami. (Wynwood is the most frequently cited example). The most hopeful and lasting sign I saw of any such change was a few blocks down from the Cisneros collection, at the small gallery Wet Heat Project. For the group show “A Piece of Me” pairs of art students from local high schools had been matched with four mid-career alumni from Miami’s New World School of the Arts. Each student team then conceived, developed, and produced a video installation in response to a piece by their alumni mentor, with both the final video pieces and those works that inspired them on display in the gallery.

What could’ve been a gimmicky set-up resulted in some truly inventive, thoughtful, and original work on the part of the students. Moreover, “A Piece of Me” offers one portable model for bridging the community at large and the art community. As Max Gonzalez, one of the participating students who was on hand, said of his installation, “It was go big or go home for us.”

Next to that vote of confidence, the Miami Beach Convention Center floor — littered with big names and bigger baubles destined for law firm lobbies and penthouse living rooms — seemed that many more miles away.