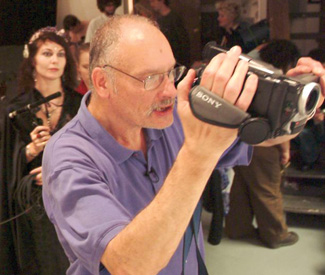 YEAR IN FILM American cinema lost several of its troubadours this past year: genuine independents like Robert Breer, Owen Land, Adolfas Mekas, Richard Leacock, Jordan Belson, and George Kuchar. Critical appraisal of these sui generis filmmakers tends to rest upon masterpieces and technique, but several were also influential as teachers.

Mekas founded the film department at Bard College, which today boasts a remarkable faculty including Peter Hutton and Kelly Reichardt. German filmmaker Helga Fanderl dedicated her San Francisco Cinematheque show earlier this fall to Breer, her mentor at Cooper Union. Leacock used his post at MIT in the 1970s to develop relatively affordable video systems for student filmmaking. Kuchar brought several generations of San Francisco Art Institute kids into moviemaking laboratories flying under banners like “AC/DC Psychotronic Teleplays” and “Electro-graphic Sinema.” After Kuchar’s passing SFAI professor and administrator Jeannene Przyblyski wrote, “I will very much miss waking up at night worrying about what might be going on in Studio 8.”

Teaching remains an underappreciated aspect of the whole adventure of avant-garde filmmaking. The late 2010 release Radical Light: Alternative Film and Video in the San Francisco Bay Area, 1945–2000 (University of California Press) lovingly detailed the instructional incubators that have contributed to a long-flourishing Bay Area avant-garde, but one still hungers for more particular chronicles along the lines of “Professor Ken,” Michael Zryd’s contribution to Optic Antics: The Cinema of Ken Jacobs (Oxford University Press). Zryd persuasively links Jacobs’ intensive teaching style at SUNY Binghamton to his thrilling feature-length frame analysis, Tom, Tom, the Piper’s Son (1969). The story of the American avant-garde’s alliance with the academy has everything to do with the mid-century college boom and the rise of theory, but this general view doesn’t take into account those outlying autodidact instructors who reoriented the teacher-student exchange in much the same way that they called upon a different kind of spectatorship.

Among the many treasures in the SFAI archive’s George Kuchar file are a couple of his syllabuses: “In this workshop atmosphere we all embark on making a moving picture using the equipment at school and … whatever else falls into our hands.” Class participation is what the class was. It’s also discretionary: “Come as frequently as you wish so that we can showcase your unique talents or specialty acts and help us try to solve the many technical and creative problems involved in making moving pictures.” Asked about his unorthodox teaching materials, Kuchar responded, “Am I going to show the students Potemkin and then talk about our class movies? With the kind of words I use and my accent? It’ll be like sacrilege or something … It’s stupid anyway. Renting movies is expensive as hell, and you can put that money into making a movie.”

Kuchar’s creativity took a liberating form in the classroom. Elsewhere in the SFAI file, the filmmaker reflects upon having to rescue terrible class productions in the editing room. One laughs at first and then is touched that he considered these real movies, imperfect but necessary to see through.

RAY OF LIGHT, RAY OF DARKNESS

One of the year’s most significant film restorations originated in a comparable workshop environment. Nicholas Ray arrived at SUNY Binghamton in 1971 not having directed since 55 Days at Peking (1963). As in Kuchar’s workshops, he took his students as collaborators: everyone rotated production jobs and worked toward the common ends of We Can’t Go Home Again, an unspooled picture of dissolution spanning the election years of 1968 and 1972. The workshop process became central to the psychodrama itself. As in other films of the era by John Cassavetes, Robert Kramer, and Shirley Clarke, the filmmaking style dives deep into breakdown narratives: he and four students charting out self-destructing versions of themselves.

In Leo Tolstoy’s prescriptive essay “Are the Peasant Children to Learn to Write from Us, or Are We to Learn from the Peasant Children?”, the great Russian author dramatizes his teaching experience to show how an attuned instructor can enrich a student’s intrinsic sense of harmony. Ray evinces a similar degree of trust in his pupils, but towards the ends of drawing out their intrinsic disharmony (this was Nixon time, after all). The composition of the drama and the drama itself bleed into one another; performance is inescapable, the film grasping how the phrase “the personal is political” was reversing itself.

We Can’t Go Home Again — which plays in a restored and reconstructed version along with Susan Ray’s contextualizing documentary Don’t Expect Too Much at Yerba Buena Center for the Arts in January 2012 — was long thought unsalvageable for both technical and artistic reasons. Ray conceived the film as a multi-projector performance, with several streams of narration playing simultaneously and various 16 mm/Super 8 mm frames affecting a kind of cinematic Guernica. The limitations of the novice crew are readily apparent, though the amateur acting likely plays differently in our present media environment. Ray continued to tinker long after presenting a version at the 1973 Cannes Film Festival, and the present reconstruction doesn’t claim to be definitive. It does, however, make Ray’s vision a feasible if still challenging theatrical proposition.

As always in the director’s work, the characters’ emotions are primary and sharply defined in space. Vulnerable figures reach across their loneliness; improvised family units emerge from the ashes of corruption and betrayal. The thin veneer of middle-class reality that gives 1955’s Rebel Without a Cause and 1956’s Bigger Than Life their magnificent tension is gone, leaving only the characters’ own psychological mirrors and Ray himself clad in James Dean’s red jacket. Student Tom Farrell is the last of Ray’s boy angels, a bewildered innocent suffering moral estrangement from his policeman father (whom he loves). The agonizing close-up in which he shears his beard in front of both a mirror and Ray’s camera is both visceral and symbolically telling, the beating heart of the film.

Though deeply marked by shame and pain, We Can’t Go Home Again also has a comic streak. The counterculture dream is pictured as eating raw cauliflower without any pants on. As he prepares to act out his suicide Ray mutters to himself, “I made ten goddamned westerns, and I can’t even tie a noose.” Of course this kind of flaunted martyrdom requires its own vanity, which might lead one to wonder about the lasting impact of Ray’s teaching — that is, whether his ferocious movie might have superseded the students’ learning.

His colleague Ken Jacobs certainly thought so: “I had the dumb idea that he would balance the little department, teaching from his narrative/Hollywood experience but he was self-aggrandizing BS throughout, with tantalizing glimpses of a former self.” Don’t Expect Too Much justifiably avoids department politics to focus on the film itself, but knowing this acrimonious background colors Ray’s former students’ awed remembrances of the Great Artist. There’s a lot of talk about the director working by instinct, exactly the kind of mystification Jacobs targets when he draws a distinction between “living through the cinema” and “using film to enrich your engagement with life and the real world”: “One is an experience that dominates while the other condemns you to be free.” The irony is that it’s hard to imagine a public university giving either man so much freedom today — if they even hired them at all.