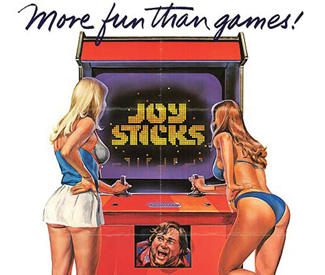 TRASH If you were around in the waning days of drive-ins and urban grindhouses, the heydays of video stores and 1980s late-night cable, or were a Mystery Science Theatre 3000 fan, the name Greydon Clark might ring a faint bell — maybe even a warning bell.

For 25 years Clark was a prolific independent director, writer, producer, and even bit-part actor in the realm of low-budget exploitation movies designed for quick playoff in second-run theaters, graveyard-shift broadcast slots, and on rental shelves. Most were retreads of well-worn genre trends, a couple outright imitations of recent hits; they rarely hit the radar of mainstream critics, let alone awards-giving bodies — not even the Golden Raspberries. Though his last two features were futuristic adventures, Clark himself was relegated to cinema’s past by the turn of the millennium, having “aged out” in a business where an obsession with youth trickles down even to the least prestigious off-camera creative roles.

Now just short of 70, Clark is still around, selling memorabilia on his website, appearing at fan conventions, and the like. This Friday he’ll be at the Roxie for a Midnites for Maniacs tribute triple-bill featuring rare 35mm screenings of features long out of circulation.

First up is 1978’s Hi-Riders, a hybridization of then-current Smokey and the Bandit (1977) knockoffs and the earlier biker-flick vogue that’s one of his most enjoyable films. Frequent Clark collaborator Darby Hinton and busy stunt performer (through 1997’s Titanic) Diane Peterson are the nominal stars of a raucous action cheapie that pits muscle-car aficionados against each other, then against trigger-happy yokels ordered to kill by a vengeful fat cat who proclaims “Animals like that should be exterminated!” Acting pitched at a 10 on the hysteria scale, skinny dipping, and good crashes involving an actual bitchin’ Camaro ensue.

This is followed by Joysticks (1983), a prior Midnites for Maniacs midnight selection that remains a giddy high-lowlight in the short-lived 80s subgenre of movies about videogaming. How can it miss, with Porky’s-style gags, a hero named McDorfus, secondary “punk” villain King Vidiot (played by Napoleon Dynamite’s future Uncle Rico), and a theme song Tipper Gore might have taken exception to (“Jerk it left, jerk it right, shoot it hard, shoot it straight, video to the maaaaaax!!!”)?

Last and quite possibly least is 1982’s Wacko, one of several Airplane!-like slasher spoofs at the time. Its genial flailing about in search of laughs ropes in several of Clark’s favorite falling stars (Joe Don Baker, Stella Stevens, George Kennedy) and one future celebrity (pre-“Dice Man” Andrew Clay, as Fonz-y high school stud Tony Schlongini). If you were 10 years old (or 15 and stoned) in 1982, this was probably the funniest thing ever. So regress already.

But this selection offers just the tip of the native Michigander’s celluloid iceberg. Driving west on a whim in the 1960s, Clark managed to score work as both an actor and scenarist with Z-budget multihyphenate role model Al Adamson, including the incredible Satan’s Sadists (1969) and incredibler Dracula vs. Frankenstein (1971).

Those experiences empowered him to direct, co-write, and act in 1973’s The Bad Bunch (Kiss The Establishment Goodbye was one of several alternative titles), a drama of Vietnam War-era racial tensions that was shot in Watts for less than $15,000. It was clumsily crafted and crudely melodramatic, but serious-minded enough — despite gratuitous boobs and opening song “Honky Mutha Nigga Lover” — to set him on a more determinedly commercial, costs recouping path from then on.

Thus 1976’s Black Shampoo, an outrageous blaxploitation cash-in on Warren Beatty’s heterosexual hairdresser lothario hit, followed quickly by the unforgettably named (if otherwise forgettable) Satan’s Cheerleaders (1977), tentacled-alien-Frisbee-creature horror Without Warning (1980, with a very young David Caruso as one victim), and so forth. They inevitably featured once-hot, now economically-priced Hollywood names of a certain age (Clu Gulager, Jack Palance, Yvonne De Carlo etc.), attractive youngers mostly never to be heard from again, and Clark regulars like actress spouse Jacqueline Cole. (The fact that so many of his actors and crew came back for more suggests that he’s a pleasant guy to work for.)

Some of these movies actually require the MST3K treatment they got (i.e. 1985 Joe Don vs. Mafia shoot ’em up Final Justice) to be watchable. Some, like 1990 psychological thriller Out of Sight, Out of Her Mind or 1980 sci-fi fantasy The Return (a rare upgrade to then-current B-level stars in Cybill Shepard and Jan-Michael Vincent), didn’t get it and aren’t.

But others are inspirationally silly, with enough hints to make it clear that their creator was in on the joke. Probably the most widely seen of his films is acknowledged camp classic The Forbidden Dance, one of two lambada movies released on the same day in 1990. It stars former Miss USA and future Mulholland Drive (2001) enigma Laura Harring as an Amazonian tribal princess who comes to Beverly Hills (accompanied by “witch doctor” Sid Haig) to attract attention to rainforest destruction via the healing power of public ass-grinding. All this and an ozone depletion message make it Clark’s Inconvenient Truth, just as The Bad Bunch was his Crash.

Less socially conscious but equally nuts are Uninvited (1988), in which a yacht full of the expected veteran actors and hot young ‘uns are terrorized by a mutant lab-experiment cat puppet; and Russian Holiday (1992), a daft espionage thriller with Susan Blakely as a tourist haplessly playing Nancy Drew amidst Moscow neck-snappings.

Then there’s 1989’s Skinheads: The Second Coming of Hate. Its hilarious racist, sexist, swastika-emblazoned goon squad makes the mistake of pursuing clean-cut “good” kids into the wilderness lair of survivalist Chuck Connors, who fought in World War II and knows just what to do with a buncha neo-Nazi scum. It’s pretty much the Reefer Madness of Reagan-era fascist punk gang movies (1982’s Class of 1984, 1984’s Savage Streets, etc.) — a category that surely calls for its own Midnites for Maniacs tribute.

“MORE FUN THAN GAMES! A TRIBUTE TO GREYDON CLARK”