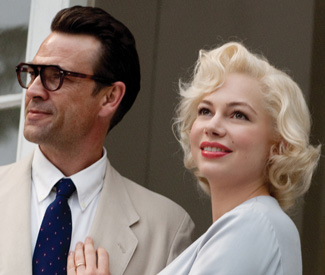 FILM There’s a new movie built around a performer’s brilliant evocation of a Golden Age Hollywood star’s charisma, ebullience, and vulnerability. And it’s not My Week With Marilyn — it’s The Artist, the forthcoming French “silent” feature in which Jean Dujardin (of the OSS 117 spy spoofs) miraculously channels the Brylcreem’d charm of pre-sound swashbuckler Douglas Fairbanks, Sr. (with a bit of John Gilbert thrown in). It’s a wonderful performance, but a) who’s ever heard of Dujardin outside France, and b) Oscar is seldom impressed by mere comedy.

Statuette-clutching odds are higher for Michelle Williams, as her impersonation of another famous dead celebrity is “well-rounded” in the sense that we get to see her drunk, disorderly, depressed, and so forth. (Never mind that Dujardin does all these things too, albeit in a pastiche homage rather than a drippily conventional, sentimental biopic.)

Her Monroe is a conscientious performance. But when the movie isn’t rolling in the expected pathos, it’s having other characters point out how instinctive and “magical” Monroe is onscreen — and Williams doesn’t have that in her. Who could? (Actually, Theresa Russell came closer despite a much looser physical-vocal resemblance 26 years ago in Insignificance, but then that movie eschewed historical literalism for a fantasia wherein Love Goddess, Einstein, and Joes DiMaggio and McCarthy meet one night.) Williams is remarkable playing figures so ordinary you might look right through them on the street, in Wendy and Lucy (2008), Blue Valentine (2010), Brokeback Mountain (2005), etc. But as Monroe, all she can do is play the little-lost girl behind the sizzle. Without the sizzle.

Which is, admittedly, exactly what My Week — based on a dubious true story — asks of her. It is true that in 1956 the Hollywood icon traveled to England to co-star with director Sir Laurence Olivier (Kenneth Branagh) in a fluff romance, The Prince and the Showgirl; and that she drove him crazy with her tardiness, mood swings, and crises. It’s debatable whether she really got so chummy with young production gofer Colin Clark, our wistful guide down memory lane. He’s played with simpering wide-eyed adoration by Eddie Redmayne, and his suitably same-aged secondary romantic interest (Emma Watson) is even duller.

This conceit could have made for a sly semi-factual comedy of egos, neurosis, and miscommunication. But in a rare big-screen foray, U.K. TV staples director Simon Curtis and scenarist Adrian Hodges play it all with formulaic earnestness — Marilyn is the wounded angel who turns a starstruck boy into a brokenhearted but wiser man as the inevitable atrocious score orders our eyes to mist over.

Meanwhile, a roll call of wasted A-list British acting talent includes Dame Judi Dench, Dougray Scott, Dominic Cooper, and Toby Jones, wringing their hands in the background. Branagh is good and Williams works admirably hard, but it’s his Sir Larry who unintentionally nails the pandering movie’s relationship to real life when he snipes that coaxing Monroe to act is “like teaching Urdu to a badger.”

MY WEEK WITH MARILYN opens Wed/23 in Bay Area theaters.