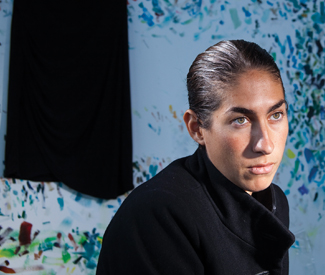 GOLDIES When I meet Ana Teresa Fernandez at her studio at the furthest edge of Hunters Point, she tells me she has just come from surfing. Water, it seems, is very much Fernandez’s element, frequently appearing in her dream-like video installations and her gorgeous, large-scale, photorealistic oil paintings as both setting and metaphor — and sometimes even as medium.

“My work is about an energy that is placed in an object that creates a kind of strangeness,” she explains. More often than not that object is a body of water: a swimming pool, a bathtub, the polluted shallows of the Pacific at the San Diego-Tijuana border (Fernandez was born in Tampico, Mexico), and the San Francisco Bay itself. The strangeness emerges out of the choreographies of resistance and restraint — ritually washing herself; performing household chores; walking, or more often than not, swimming in heels — that Fernandez executes at these symbolically-charged sites, documented in the larger-than-life scale of her videos and paintings.

For its many beautiful surfaces, Fernandez’s art doesn’t let you forget that the actions depicted are rarely neutral, even if the ways in which they’ve been gendered, raced, and classed have been naturalized. The glossy realism of Fernandez’s aesthetic also foregrounds the physicality and sensuality of what she’s doing or enduring. For example, in the video of her performance Ice Queen, Fernandez wears high heels made of ice while standing on an Oakland storm drain until her footwear has entirely melted back into the Bay some 45 minutes later. In one of the paintings from the “Pressing Matters” series, Fernandez is shown mopping the beach at US-Mexico border while in pumps that sink into the sand, an image that is the very definition of Sisyphean.

Fernandez wears that uniform of a black cocktail dress and matching heels in many of her performances. It simultaneously draws attention to her body through its very incongruity with her setting or actions while also rendering her archetypical feminine. When I ask her about this tension, Fernandez, who swam competitively for 14 years, informs me that to wear clothing while racing is called drag, leading to a half-joking assessment of her performance getup as “wearing the weight of femininity.”

But for Fernandez, who cites modern artist Marilyn Minter and Neoclassical painter Jean-Auguste-Dominique Ingres as inspirations in the same breath, the point is not accusatory per se, but to explore how that weight can or can’t be shifted through a willful blending of the metaphoric and the physical. Water can drag you down, but it also provides buoyancy. “There are these moments of seduction that occur because of the element itself, whether its the beauty of the sea or the allure and sensuality of dance. I throw a wrench into all that,” Fernandez explains. “Actually, I throw the whole toolbox.”