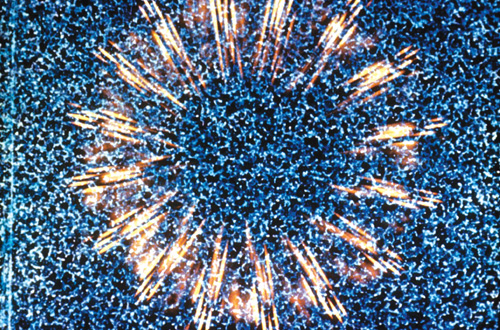 FILM A pioneer of what film scholar Gene Youngblood called “expanded cinema,” San Francisco artist Jordan Belson developed his majestic form of abstract cinema over six decades of work. He died last month at 85, the same day as George Kuchar. Belson worked on a very different plane than Kuchar: his films were non-representational, long in the making, and were for many years out of circulation owing to his rigorous standards. The prints showing at a special memorial screening at the Pacific Film Archive come from the Center for Visual Music, a Los Angeles-based organization carrying on extensive preservation work of Belson’s work. Choreographed along the lines of rhythm, texture, frequency and color, Belson’s assured geometric forms tend to evoke sublime metaphors of subatomic particles, space odysseys and mandala wheels. For me, they create a startling awareness of cinema’s weightlessness (and for less than The Tree of Life‘s catering costs).

Belson had deep roots in the sprawling avant-garde mapped in Radical Light: Alternative Film and Video in the San Francisco Bay Area, 1945-2000 (University of California Press). After graduating from UC Berkeley a painter in 1946, he became enamored with cinema’s purely graphic possibilities after being exposed to visual music by the likes of Oskar Fischinger and Norman McLaren at Frank Stauffacher’s legendary “Art in Cinema” series at the old San Francisco Museum of Art. Along with his early forays in animation, Belson shot Christopher Maclaine’s The End (1953), a fruitful case of clashing sensibilities.

Belson took a great leap forward with a series of light shows he orchestrated with electronic music composer Henry Jacobs in the late 1950s. The Vortex Concerts created a sensation at the Morrison Planetarium in Golden Gate Park: “People were just ripe for it,” Belson explained in an interview with author Scott MacDonald. “It” was a carefully articulated sensory immersion based upon the planetarium’s advanced technology (including a then novel star projector), Belson’s extraordinary sensitivity to the kinesthetics of light, and Jacobs’ innovative compositions for rotational speakers.

You get an inkling of what they were up to in Allures (1961), an enveloping film that grew out of the Vortex Concerts. The mostly circular figures radiate out, rotate, recede, divide and multiply. These movements surface micro-calibrations of tonality and rhythm in the music. A gravitational focus towards the center of the frame draws in the eye and makes those moments when the entire frame glimmers with points of light frankly overwhelming. The titles of some of Belson’s other films give you a sense of his energy-seeking objectives: Séance (1959), Chakra (1972), Cycles (1974, co-produced with Stephen Beck), Music of the Spheres (1977), and so on.

Belson preferred not to discuss his practical methods in public — “I like a convincing illusion,” he told MacDonald — but it’s clear from watching a selection of his films that his technique evolved over time. In Light (1973), a piece inspired by the electromagnetic spectrum, Belson conveys color as a matter of temperature rather than discrete points of energy. And in his final masterwork, Epilogue (2005), the light particles of Allures have been replaced by billowing supernova clouds of color subtly illuminating Rachmaninoff’s “Isle of the Dead.” Given Belson’s lifelong channeling of the cosmos, it’s fitting that this video composition was partially funded by NASA’s art program.

The Center for Visual Music has issued an excellent DVD including several of the abovementioned films (Jordan Belson: 5 Essential Titles), but Belson’s work takes on a different life in the cinema — among other revelations, the darkness surrounding the screen is superbly vivid in light of Allures‘ fireworks. “I am essentially an artist of the inner image,” the filmmaker told MacDonald. Film is not the most logical tool to accomplish this ends, but Belson undoubtedly made the medium his own.