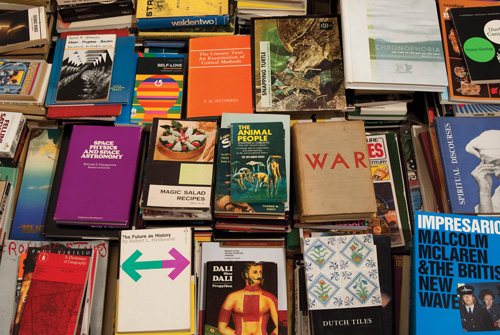 LIT Poet Nick Hoff is best known for his acclaimed translation of Friedrich Hölderlin’s Odes and Elegies (Wesleyan, 2008), while Matt Borruso has achieved some notoriety as a visual artist (his “The Hermit’s Revenge Fantasy” is at Steven Wolf Fine Arts through Sat/8). Yet both are also seasoned book scouts, those scavengers of estate sales, thrift shops, and flea markets who find saleable treasures buried in otherwise worthless piles of printed matter. And it’s in this capacity that they’ve embarked on a collaborative experiment in what one might call “conceptual commerce:” Scanners, a used bookstore that opened October 1 and closes at the end of the month.

The impulses behind Scanners are various. In the face of what Hoff calls “the media’s hysteria about the death of print,” both he and Borruso remain interested in the book as material object rather than simply bearer of text, easily replaceable by more efficient digital media. But in an immediate sense, the project is informed by their experience in a profession that, like many, has felt the digital squeeze. The word “scanner,” says Hoff, is a derisive term among book scouts for the increasingly numerous competitors whose knowledge of a book’s value solely stems from their mobile barcode scanners.

“At a library sale,” Hoff continues, “for every person without a device, there’s 50 people scanning books. The device tells them whether it has value. The traditional book scout who knew about book culture is becoming a thing of the past.”

While scanners have drastically increased competition, devaluing that knowledge built through long practice, Borruso and Hoff are quick to own the advantages of the digital age; their ability to sell books online directly to consumers rather than a book dealer has offset the blow to their bottom line. And knowledge retains its edge. “Not everything has a barcode,” Borruso says with a sly smile, and throughout our conversation, it’s clear both men value the thrill of the chase at least as much as its results. Borruso speaks of the “adrenaline” that comes from finding that overlooked tome, while Hoff dwells on the more profound relationship a reader has with a long-sought book than with an instantly purchased text. Both savor the role chance plays in their acquisitions.

With Scanners, they seek to replicate the conditions for such discovery. Herein lies the name’s opposite sense, of scanning physical shelves for the book chance may bestow. To this end, the duo intends to organize the store according to non-traditional categories — replacing the specific “economics,” for example, with the open-ended “money” — and emphasizing face-out visual display. Perhaps inevitably, the artist Borruso is more interested in the display aspect, while the writer Hoff is eager to see what categories will emerge from the 400 boxes of books they’ve stashed away over the past year.

Much of this, Borruso says during our interview, “is still theoretical,” as they only had a three-day window at the end of September to set up shop, using a break in the exhibit schedule of the Mina Dresden Gallery to inhabit its foot-traffic-friendly Valencia space. There’s something appropriate about staging this bookstore in an art gallery, for the project is at once scrupulous and absurd, requiring all the effort of opening a real bookstore — cash registers, credit card capability, etc. — even as they intend to close in a month. “It’s not a viable business model,” Borruso laughs.

Being temporary, as Hoff notes, makes the bookstore “into an event itself.” Nonetheless, there will be events within the event, beginning with a conversation on bookselling between William Stout, owner of William Stout Architectural Books, and Paul Yamazaki, bookbuyer for City Lights. Upcoming events — listed on the store’s website — focus on archiving in the digital age, the neuroscience of reading, and artists’ use of found source material, reflecting Hoff and Borruso’s diverse interests in printed matter.

“Our idea is to highlight things people will respond to a physical level,” Borruso concludes. “To base a store on things you wouldn’t be able to appreciate in digital format. Some of these things you might see and think, ‘I want that,’ but you would never know that seeing it even in jpeg form. You need to see it as an object, as a thing.” 2

“ON BOOKSTORES AND BOOKSELLING”